Mailbag: Does the O-line need an upgrade? Trade up or down in the draft? Biggest needs in free agency? 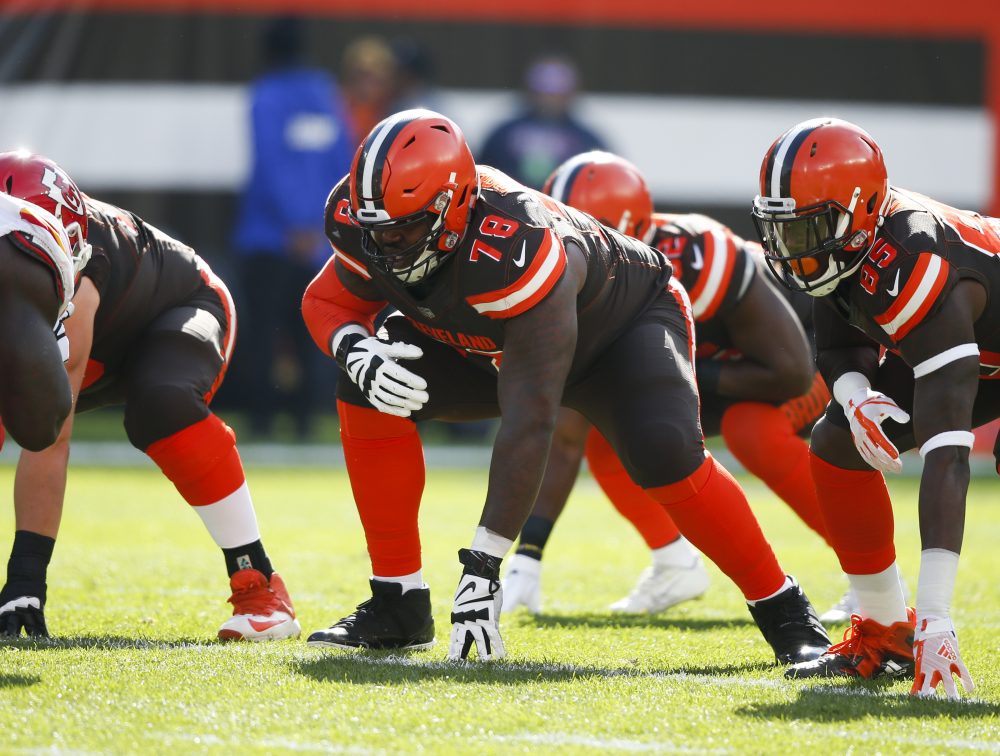 Q: A few years ago our line was doing great. Then Alex Mack broke his leg and the season went downhill — we were leading the league in rushing with Mack. This past year the line was solid for the last half of the season and we turned things around (yes, there were other reasons). I’ve read that our focus in the draft for the first round should be defensive tackle. So far, Austin Corbett looks like one of GM John Dorsey’s few mistakes. Shouldn’t we get our line upgraded first as we still don’t have a left tackle we can rely upon?

A: One of the biggest questions for the offseason is who will play left tackle for the next several years. Greg Robinson, who made a huge difference once inserted in Week 9, is scheduled to be a free agent. Dorsey said he wants to keep him and has begun talks with his agent. If the Browns believe Robinson, the No. 2 pick of the Rams in 2014, can be the long-term answer and can get a deal done, the need to address the line moves well down the list of priorities.

Guards Joel Bitonio and Kevin Zeitler played at a Pro Bowl level, center JC Tretter impressed everyone by playing through a high ankle sprain and right tackle Chris Hubbard was much better in the second half after a change in technique. If left tackle isn’t an issue, Dorsey would be looking for only line depth in the draft.

As for Corbett, the No. 33 pick in 2018, Dorsey hasn’t given up on him despite a lost rookie season. He could compete with Tretter for the center spot but seems more likely to open the season as the top interior backup. Not ideal for such a high pick but not the end of the world.

Q:
Browns have pick No. 17. Colts have Nos. 26 and 34. Could a trade happen? Benefit both teams? In past years Browns trade-downs were less than wonderful, but maybe John Dorsey and staff could strike gold twice, not just once? Thank you.

Isn’t it nice to be looking at free agency and the draft not as first steps, but rather as final steps?

A: I think everything’s on the table when it comes to the draft. In Dorsey’s 14 months with the Browns, he’s shown a willingness to be aggressive through trades and that wouldn’t stop during draft weekend.

With the draft still three months away, I think Dorsey would be more inclined to move up in the draft than down. He rebuilt the roster to a point where it has fewer glaring needs and decent depth but it still lacks elite playmakers. So if he falls in love with a defensive lineman, linebacker or cornerback who he’s afraid won’t be around at No. 17, it would make sense to move up three, four or five spots to land a difference-maker.

Q: Would I be wrong in saying this team is an edge rusher, an adequate defensive tackle and a Pro Bowl-caliber outside linebacker away from being a championship contender?

A: I’m not going to argue those are needs, but I would place stud defensive tackle much higher than outside linebacker, where I think the Browns could get by with Jamie Collins and Christian Kirksey for another year.

As far as being a championship contender, the key is whether Baker Mayfield plays like a top-10 quarterback. If he doesn’t play in the same ballpark as Patrick Mahomes and Jared Goff did this year and Carson Wentz in 2017, the Browns won’t be able to make the leap. If he does, they can survive a few weaknesses elsewhere.

I would also throw in another receiver to fill out the roster.

Q: Which position group do you think they’ll target in free agency and subsequently in the draft?

A: I love the idea of signing a veteran defensive end to pair with Myles Garrett and teach him a few things. Next in line in free agency would be a receiver to add to the mix, preferably one with size. Then maybe an outside linebacker if John Dorsey’s looking for an upgrade over Jamie Collins and Christian Kirksey.

That would leave the draft for finding a game-changing defensive tackle and another quality young cornerback.

Q: Please name 6 free “Dorsagents” that the big guy might be targeting.

Q: Should the Browns draft a QB?

A: A little sarcasm from one of my radio friends.

While we all know the draft talk won’t focus on quarterback for the first time in forever, I won’t dismiss the possibility of drafting one in the later rounds.

With Tyrod Taylor headed out of own in free agency, John Dorsey must decide how he wants to set up the quarterback room behind Baker Mayfield. He could go with veteran Drew Stanton as the No. 2 and draft a young guy to learn as the No. 3 or on the practice squad. Or he could sign a quality No. 2 in free agency and let Stanton remain in the No. 3 role.

Q: Should Hue Jackson comeback as a consultant?

A: Another attempt at sarcasm, following Camino’s lead. This time with a definitive no for an answer.

Q: At some point I would like to know if the Haslams understand the primary colors are white and brown. Orange is/was primarily the helmet. Orange & Brown is an expression, a figure of speech. Why do we want to look like the Denver Broncos??

Please help us Scott and shed some light on this issue before the new units come out.

A: The good news: The Browns are expected to get new uniforms in 2020. The bad news: I don’t think orange is going anywhere.

While the Browns haven’t publicly discussed the expected changes, I believe they feel orange is a popular piece of the color scheme, particularly with the young crowd.

Mailbag: Biggest draft need? Who deserves an extension? Jamie Collins coming back?
Mailbag: Is defensive end really a need? What about the DC hire? Do the Browns have to spend all their salary cap space?