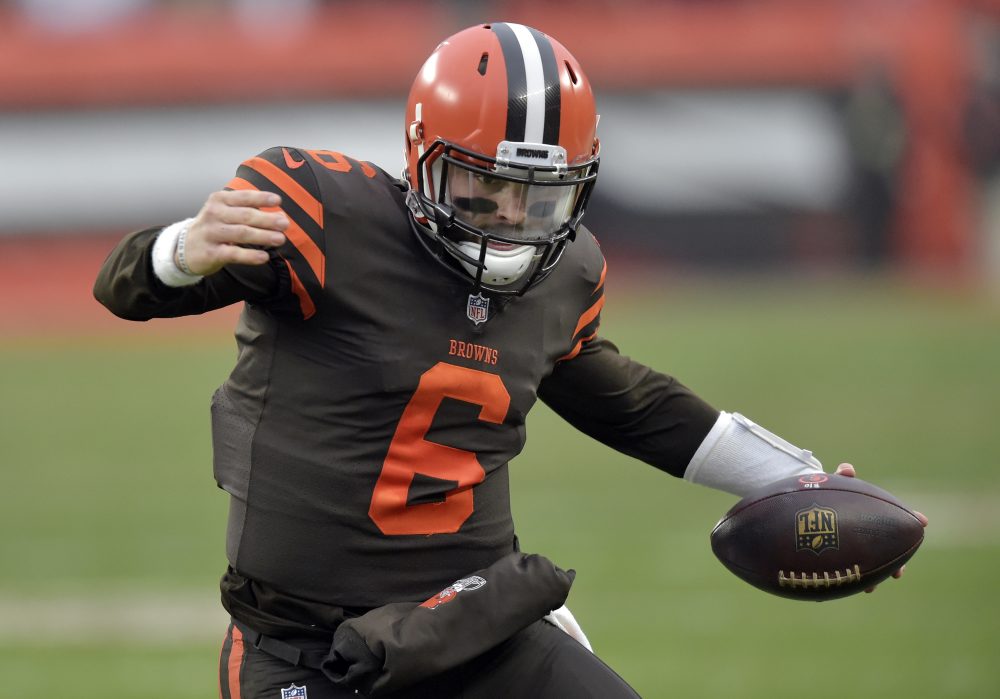 Baker Mayfield was far from satisfied with the Browns’ 7-8-1 record in his rookie season.

He was impressed by the fans’ reaction to the drastic improvement after the Browns went 1-31 in the previous two seasons.

“I always wanted to say that the past didn’t matter, it’s about what we’re doing right now,” he said on SiriusXM NFL Radio on Wednesday. “But you can tell with what’s going on right now, we didn’t even have a winning season and it feels like we won the Super Bowl. It means so much to them.

“It’s a football town when it comes down to it and the energy there now is so exciting. The expectations are going up, which is positive. You want the fans to have high expectations. You want them to be involved and be happy about it, so it’s a great town to play in.”


Mayfield’s in Atlanta for Super Bowl LIII and spent Wednesday doing several interviews on radio row. He was a sought-after guest and represented Pepsi.

In an upset Thursday morning, Giants running back Saquon Barkley was named Pepsi Rookie of the Year over Mayfield. The award was based on fan voting.

The official Associated Press Offensive Rookie of the Year will be announced Saturday night, with Mayfield and Barkley again the leading candidates. A media panel voted for the AP award.

Fans and media are already talking about the playoffs for 2019 after the Browns went 5-2 over the final seven games. Mayfield won’t back down from big goals and said he’d like to return to the Super Bowl but in a much different role.

Mayfield and new coach Freddie Kitchens continue to show they’re on the same page. At his introductory news conference Jan. 14 Kitchens said it “drives me crazy” people were happy with 7-8-1 and he’d only be satisfied hoisting the Lombardi Trophy.

Mayfield quickly bonded with Kitchens when he became offensive coordinator at midseason and said he wanted him to get the head coaching job.

“Seeing how he was, how he didn’t change when he made the jump from running backs coach to offensive coordinator and then just taking over and the difference that we had while he was calling plays, he had guys believing in him,” Mayfield said on SiriusXM. “When you have guys that believe in you as a head coach and respect you, it’s going to be great things that happen. You know what? That was my choice. I believe in him. That’s not to say anything about anybody else, but we had something special and I want to build on it.”

Mayfield was asked by USA Today to describe Kitchens.

“He’s just a slappy,” Mayfield said. “He’s just an open communicator. He’s just himself. He’s proud to be a redneck from Alabama. He talks about anything and everything. He relates to everybody. It was great on the field, but then off the field I think is why it was successful.”

Mayfield was a different player after coach Hue Jackson and coordinator Todd Haley were fired Oct. 29. He ranked second in the NFL in yards per attempt (8.57), tied for fourth in touchdowns (19), fifth in rating (106.2) and ninth in completion percentage (68.4) and yards (2,254).

“I think everything happens for a reason. And there’s a reason that we weren’t playing well when all of that was going on,” he told USA Today. “If you have that many distractions and that much drama within the building, how are you supposed to go out on Sunday and compete?

“So to be able to eliminate distractions, focus on doing your job, having guys that believe in it is the best thing. And that’s what we have right now with Freddie.”

Mayfield didn’t get into his rocky relationship with Jackson and his criticism of him after Jackson took a job on the Bengals staff. But he again echoed Kitchens.

“If you’re not with us in Cleveland, you’re against us,” Mayfield said on Fox Sports’ “Undisputed.” “We have division rivals, and that’s how I feel about it. If you don’t like that, then you probably don’t realize what type of a game football is.”

He told SiriusXM it was important for the team not to take a step backward, and for him to cut down on his 14 interceptions.

“To me, taking care of the ball is the biggest thing,” he said. “I had too many turnovers last year. I know it was my rookie year, but I could care less. I’ve got to take care of the ball.

“It was fun, but there’s so much room for improvement. Just knowing when I need to take my chances and knowing when to pull back, so that’s part of the learning process, and I’m looking to make a huge jump in Year 2.”

Denzel Ward says he’s back to himself, looking forward to seeing action in Pro Bowl
Notes: Season ticket prices going up for 57 percent of FirstEnergy Stadium