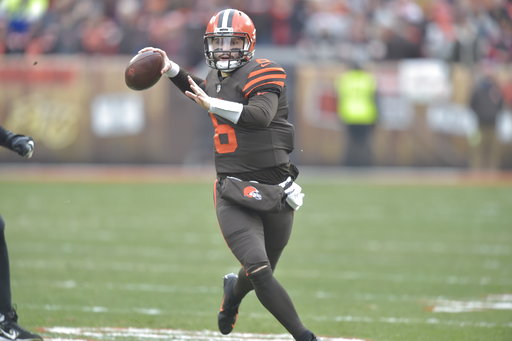 Impact lost out to statistics.

Despite leading the greatest turnaround in franchise history and restoring pride and hope to the Browns, quarterback Baker Mayfield finished second to Giants running back Saquon Barkley for NFL Offensive Rookie of the Year.

The Associated Press awards, voted on by 50 members of the media, were presented Saturday in Atlanta as part of the NFL Honors show.

Mayfield, the No. 1 pick, didn’t play until Week 3, when he came off the bench to lead a comeback win over the Jets. He made his first start the next week and was 6-7 as a starter. The Browns went 7-8-1 after going winless in 2017.

With 2,028 yards and 15 touchdowns from scrimmage, Barkley became only the third rookie in NFL history to reach 2,000 yards, joining Eric Dickerson and Edgerrin James.

Barkley rushed for 1,307 yards, a 5.0 average and 11 touchdowns, and caught 91 passes (a record for a rookie running back) for 721 yards and four touchdowns.

“It’s crazy to win this award,” Barkley said. “It’s definitely an honor. Definitely a shout-out to Baker. He had a great year this year.”

Mayfield’s stats weren’t anything to dismiss.

In the final eight games, after new coach Freddie Kitchens took over as coordinator, Mayfield ranked second in yards per attempt (8.57), tied for fourth in touchdowns (19), fifth in rating (106.2) and ninth in completion percentage (68.4) and yards (2,254).

Barkley made it 2-0 against Mayfield for the week, previously winning the Pepsi rookie award decided by a fan vote.

They bet on the outcome of the award Saturday, with the loser owing the winner a chain. The loser gets to pick the design.

“With Baker Mayfield, you never know what you’re going to get,” Barkley said. “But, yeah, we made a little fun bet just to show that obviously we both want to win this award, but it’s bigger than us.

“It’s about a friendship, and the love that we have for each other. But I did win, so I do get a chain and he gets to pick and whatever he picks I’m just going to wear it and that’s a gift.”

Notes: Season ticket prices going up for 57 percent of FirstEnergy Stadium
Baker Mayfield says he’s motivated, will be “better in the long run” after not winning Rookie of Year