Baker Mayfield says he’s motivated, will be “better in the long run” after not winning Rookie of Year 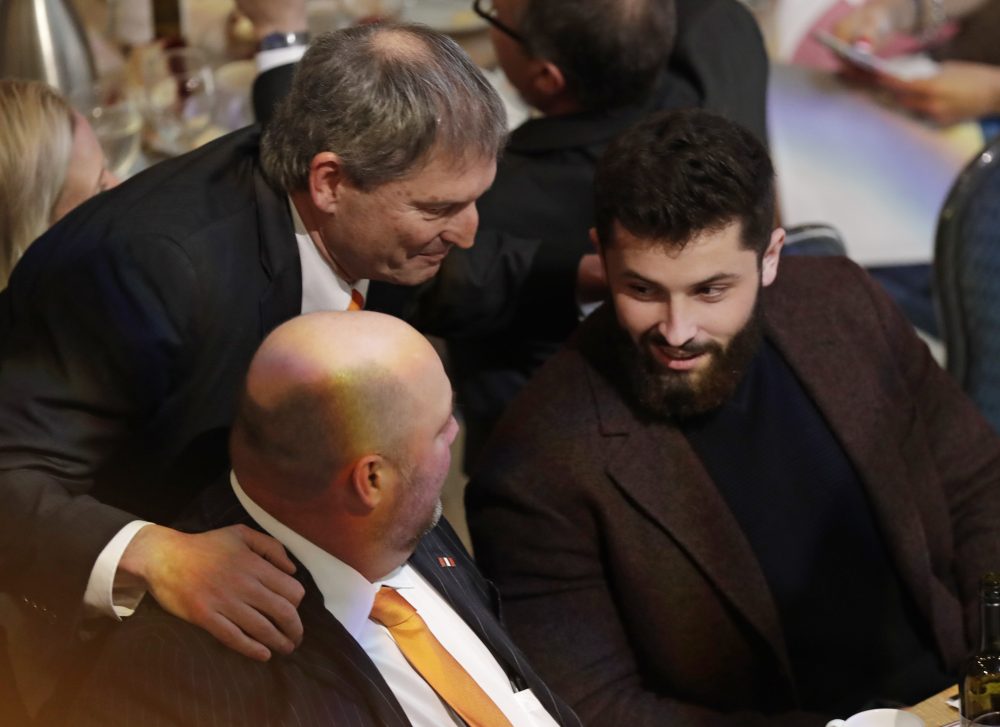 The Greater Cleveland Sports Awards Professional Athlete of the Year doesn’t have the same prestige as NFL Offensive Rookie of the Year, but Mayfield was happy to win it Wednesday night. The other finalists were Browns rookie cornerback Denzel Ward, Indians pitcher Corey Kluber and Indians third baseman Jose Ramirez.

“This is quite the honor,” Mayfield said. “And we had an incredible season, but we’re not happy about it and we’re definitely not satisfied.

“And I think that’s the best part about this town is you guys have deserved a great team for so long and it’s going in the right direction, thanks to some of these people sitting right here. Thank you guys very much, appreciate you, love Cleveland.”

Mayfield sat at a table next to the stage with owner Dee Haslam, general manager John Dorsey and new coach Freddie Kitchens.

“I can’t thank this city enough,” said Mayfield, who went 6-7 as the starter and set an NFL rookie record with 27 touchdown passes. “I can’t thank the Haslam family enough, Coach Dorsey, even Freddie, we’re new friends.

“These people took a chance on me and I don’t know if everybody knows my story. If you believe in me, I’ll probably take a bullet for you. And that’s what this city is all about. It’s a family.”

Mayfield finished a close runner-up to Giants running back Saquon Barkley in the AP Offensive Rookie of the Year voting last week. Barkley’s 2,000 yards from scrimmage won out over Mayfield’s impressive numbers (franchise rookie-record 3,725 yards, 115.7 passer rating in the red zone) and leading the greatest turnaround in franchise history.

“I’ll use it as motivation,” Mayfield said. “But the more important thing is winning football games. Yeah, it’s more frustrating than anything because Saquon, that’s my guy and he’ll hold it over my head forever. But you know what, I’ll use that as motivation and I’ll be better in the long run.”

Mayfield said Barkley has been rubbing in the win, which will come with a chain bought by Mayfield after a bet. The chain will say “Quads,” for the size of Barkley’s legs.

The Browns also won Best Moment of 2018 for their breakthrough, which started with the Week 3 win over the Jets in which Mayfield came off the bench and led a comeback that snapped a 19-game winless streak. The Bud Light fridges popped open late that Thursday night.

“I’m not going to diminish the moment here, but I think these people in the Cleveland Browns table want to tell you one thing: We got a lot more of these moments coming up here in the future, I’m going to tell you that right now,” Dorsey told the crowd.

Mayfield’s presence and the 7-8-1 finish after going 1-31 the previous two seasons have Browns fans eager for next season.

“If they weren’t excited, I think they’d be kind of blind to what was going on,” Mayfield said. “The excitement’s real and it should be.

“That’s our goal, to set our expectations and live up to that hype, but it’s our own hype that we’re building up. We’ve shown what we can do at times, but we need to be more consistent and we need to win more games, that’s just plain and simple and that’s competing for the division and the playoffs every year.”

The first step was taken last season. And it was a giant one.

“I think we’ve kind of knocked off the reputation of Cleveland Browns now,” Mayfield said. “So now you’ve got to have that mentality of we want to be the best, and that’s how you have to handle every day.”

Being the best means winning the Super Bowl. Kitchens and Mayfield have talked openly about that as the goal.

He was an interested observer of the Patriots’ 13-3 Super Bowl win over the Rams and third-year quarterback Jared Goff on Sunday. Goff was the No. 1 pick in 2016, Mayfield in 2018.

“He did a great job all year and so I’m looking forward to it when we get our shot to be there and taking advantage of it,” he said.

Mayfield also has a connection with New England’s Tom Brady after sharing the screen in a commercial honoring the 100 years of the NFL. Brady hands his five Super Bowl rings to Mayfield and leaves to join the scrum after Mayfield says “get out there, old man.”

“Obviously, being a part of something like that is very special,” Mayfield said. “Some of the names in that, if you told me last year that I would be a part of a commercial like that, I would’ve told you you’re absolutely lying.

“So to be able to be a part of a commercial with legends like that and actually be next to Tom Brady, no matter what you think about it, that’s the greatest of all time. So to be able to actually hold those rings — those were the real rings, they are heavy — it’s something fun. Getting to talk to him a little bit and just get to know him and just be around like that, his presence is something that you feel as soon as he walks into a room. That’s the kind of stuff you admire and I want to have when I finish playing.”

The Browns will travel to Foxborough, Mass., this season to play the Patriots.

“That will be awesome, to play against somebody that has been playing for so long at such a consistent level,” Mayfield said. “That’s one of those challenges that you try and rise up to each week, and that will be fun.”

Mayfield had fun Wednesday night, accepting the award from former Browns quarterbacks Bernie Kosar and Paul McDonald. He said Kosar was welcoming and has told him about the good old days of the Browns.

“He was always there and he’d pick up the phone at any time, and so thankful for that because he’s obviously the best quarterback to ever play for the Cleveland Browns,” Mayfield said. “And so that’s something that’s pretty cool for me to be able to call him and get advice from him.”

Baker Mayfield loses out to Saquon Barkley for Offensive Rookie of the Year
Coordinators say they were drawn to Cleveland by young, talented roster, starting with Baker Mayfield