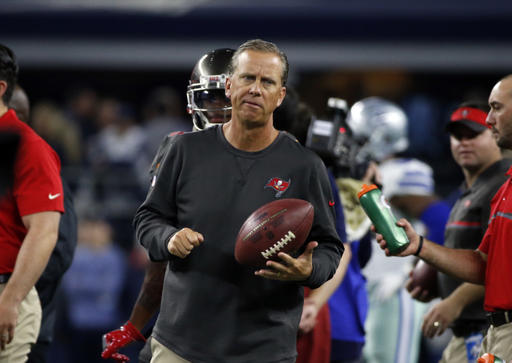 BEREA — Todd Monken interviewed for head coaching jobs with the Jets, Bengals and Packers in January. After he didn’t get them, he became a hot offensive coordinator candidate.

He picked the Browns.

New coach Freddie Kitchens will remain the play caller, but Monken came anyway as coordinator. He had his reasons, and quarterback Baker Mayfield was near the top of the list.

“In order of what I was looking for was opportunity to win and potentially a franchise quarterback, the right people and third was calling the plays,” Monken said Thursday as the three new coordinators were introduced. “When I watched what they did the last eight weeks of the year and how they went about it and organizationally, it was something that I wanted to be a part of.”

Mayfield and Kitchens led the second-half resurgence last season, as the Browns went 5-2 to end the season and Mayfield ranked in the top 10 of numerous statistical categories during Kitchens’ eight games as coordinator and play caller. Kitchens believed his performance in the roles got him the head coaching job and didn’t want to give up the reins.

He was still able to land Monken, who turned 53 on Tuesday. Monken started his coaching career in college in 1989, entered the pros in 2007 and has bounced between levels since, including as head coach of Southern Mississippi from 2013-15. He didn’t know Kitchens or general manager John Dorsey before interviewing.

“To me, it is pretty simple,” he said. “I have always chosen places based on the people and the opportunity to win. When you look at the young roster and when I came and met with Freddie, John and the other people in the organization, it just felt right.

“I felt like I wanted to be part of this moving forward. In the end, it is about winning. It is about being around good people. It is about moving the football, regardless of who is calling it. I have called it in the past, so it is not as if I am not capable of that.”

Defensive coordinator Steve Wilks and special teams coordinator Mike Priefer also pointed to the young, talented group of players as a key reason in choosing Cleveland. The respect for the roster starts with Mayfield, who set the NFL rookie record with 27 touchdown passes.

“You can’t win in this league if you don’t have a quarterback and we have a quarterback,” said Wilks, who was fired as Cardinals coach after one year. “Not only do we have one, but we have one that I consider to be, from my studying, the things I learned from him coming out of college, he’s an alpha male, he affects not only the offensive side of the ball, but this team and that was very attractive coming here.”

Mayfield passed for 3,725 yards, the most by a Browns rookie and sixth all time among NFL rookies. He threw a touchdown pass in each of his 13 starts.

Mayfield says he’ll be motivated by rookie of year snub, will be “better in long run”

“Obviously, on film, it is easy to see his skill set, his ability to make plays outside of the pocket and what he brings to the team in terms of mental toughness and the leadership — he inspires others to play around him and he holds himself and others to a high standard, which is where it has to start at quarterback,” Monken said. “I am excited to get started. Unfortunately, it will be a couple months away, but it is an exciting time.”

Monken spent the last three years as coordinator with the Buccaneers and called plays in 2018 for 15 games. He worked with quarterback Jameis Winston, the No. 1 pick in 2015, three years before Mayfield had the honor.

“The one thing from what I hear about Baker that is similar to Jameis is Jameis is a tremendous young man,” Monken said. “He loves football. He is very intelligent. He is passionate about it. He owns it.

“Those are all of the things that I hear about Baker — a guy that loves football, that loves to compete, that loves to be around the building and owns his mistakes, which is a great start.”

Mayfield and Monken met during Mayfield’s return to town this week. They won’t be able to work together until April but got acquainted and traded good-natured jabs.

“I’ve had some interaction with Todd. He’s actually an Oklahoma State guy at heart, so we’re going to butt heads about that a lot, but he’s a great guy,” Mayfield, an Oklahoma alum, said Wednesday at the Greater Cleveland Sports Awards. “Obviously, they loved throwing the ball. I think we’re going to have to find ways to convince him to hand the ball off to (Nick) Chubb.”

“Oh, I don’t know about that. I think that is a little bit of a stretch,” Monken said of the presumption he’s reluctant to run the ball. “I like scoring points, so however that is.

“Yeah, it does absolutely stink that he is from Oklahoma. That was probably the negative that almost stopped me from taking the job.”

Monken spent two stints as an assistant at Oklahoma State, including with former Browns quarterback Brandon Weeden in 2011. That’s where he got the label of expert in the pass-happy “Air Raid” offense. He was blunt and all business throughout the news conference and bristled when the term was brought up, using air quotes and pointing out his background is more diverse.

“Really what I took away from it was being able to throw to win. That really to me was the Air Raid,” Monken said, adding he believes in spreading the ball among several playmakers. “How do you become explosive? Space players and throwing it over their heads or throwing in intermediate pockets, and running the football adds to that.”

Monken said he’ll remain ready to call plays in case Kitchens decides at some point he doesn’t want to do it. He said their personalities match, including their aggressive styles.

They’ve just begun to start on the playbook for the season and will try to blend the histories of the offensive staff to make a “Browns offense.” Run-pass options (RPOs), used heavily in college and by the Chiefs and Eagles, will be a part of it.

“That has been my background. Hopefully it is something that interests Freddie,” Monken said. “Obviously, me coming here was a part of it being a collaborative decision in what we did.”

A lot at stake as Baker Mayfield tries to end terrific rookie season on high note
Defensive coordinator Steve Wilks eager to get back to work after getting fired by Cardinals, jumped at chance with Browns