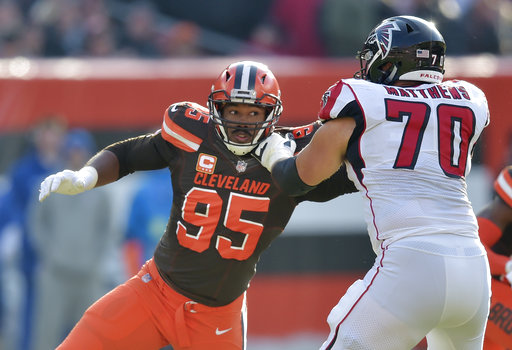 BEREA — The talent evaluation of the Browns defense starts with end Myles Garrett. New defensive coordinator Steve Wilks came away impressed and with a mission.

“A very talented individual,” Wilks said Thursday at his introductory news conference. “I am excited about working with him and trying to really get him to that next level.”

Garrett, the No. 1 pick in 2017, made the Pro Bowl this season and was second-team All-Pro. He was sixth in the league with 13.5 sacks, after seven in an injury-marred rookie year.

What’s the next level Wilks seeks?


“When you look at a player of his caliber being the first overall draft pick and his talent, it is really about trying to get to that All-Pro status and that consistency week in and week out,” Wilks said. “I think that he has the traits and the ability to be a dominant player at this level, but we are looking for that consistency week in and week out.”

Wilks said the film study showed Garrett to be as talented and athletic as anyone he’s been around.

“Very athletic. Very fluid. Quick off the ball. Great skill set,” he said. “I was very excited when I started watching tape and just his ability to be able to anchor and play the run. A lot of time when you have guys with that skill set, it is just a mindset of really trying to get after the quarterback. I know what I just said earlier about this being a pass-happy league, but there is nothing more demoralizing to a defense than having a team run the ball down your throat. That is the one thing we have to pride ourselves in is stopping the run first. I think he does a great job of doing that.

“We just have to continue to add to his repertoire for pass rush.”

A potential way to do that would be having recently retired Panthers end Julius Peppers pay a visit during the offseason or training camp. General manager John Dorsey had Garrett watch film of Peppers because they have similar body types.

“That is always a possibility,” said Wilks, who coached Peppers as coordinator in Carolina. “You always try to look, whether it is former players or coaches with different traits and skills that you would like to try to bring in, so that is definitely a thought.

“I am sure that he is going to have a lot of time on his hands now with retiring. I was very fortunate to have the opportunity to be able to coach him that one year. A great football player.”

Wilks would like to add another elite rusher to give offenses someone else to worry about besides Garrett.

“You can never have enough rushers, whether you complement him from the inside with a strong 3-technique that can rush and get off the ball or where it is another guy from the outside, because I think at that particular time it affects their pass protection. They can’t really lean to one side, and it really takes some pressure off him.”

New special teams coordinator Mike Priefer went to the Naval Academy and flew helicopters for five years after graduation. During his downtime he would study his father’s football playbooks.

He then coached under Jim Tressel at Youngstown State in 1997-98, winning a Division I-AA national championship. He missed flying.

Priefer was born here and stayed for 10 years, living in Middleburg Heights and Brunswick. His dad, Chuck, started his coaching career at Padua High School in Parma before eventually making it in the NFL as a special teams coach. He coached Dorsey with the Packers in 1985 and Mike was a ball boy.

“I grew up a big Browns fan, Indians and Cavaliers,” he said. “Really excited to be here. Huge opportunity. Great time to be a Brown with the team that we have.”

He said the experience in the Navy taught him to be a better leader.

“I learned about how to help young men reach their goals and reach their full potential,” he said.

Priefer was suspended for two games by the Vikings in 2014 after an independent investigation into claims he made a homophobic remark during the 2012 season. He was asked Thursday what he learned from the suspension.

“A situation occurred in Minnesota where I made a comment that I should not have made, and I apologized for that comment,” he said. “I learned a lot from it, and what I learned is that you can’t say hurtful things about people, period — no matter where you are, no matter who you are talking to.”

Priefer revealed he hired Doug Colman as an assistant. A linebacker, he played five games for the Browns in 2000. The team hadn’t announced the hire.

The Browns are expected to bring in competition for kicker Greg Joseph, who went 17-for-20 on field goals and 25-for-29 on extra points as a rookie. Priefer scouted Joseph before the draft last year.

“I really liked Greg coming out of college last year, a strong-legged kid,” he said. “I still think he needs some technique work, but there is something there. I think he has a chance to be a really good kicker.”

Receiver Jarvis Landry told Cleveland.com during Super Bowl week he and quarterback Baker Mayfield were trying to recruit free agents to the Browns. Mayfield had dinner last month with Giants receiver Odell Beckham and Broncos pass rusher Von Miller, who aren’t free agents but have been mentioned in trade rumors.

“Good friends. It’s good to get to know those guys outside of the football field and build relationships with them,” Mayfield said Wednesday at the Greater Cleveland Sports Awards. “No, I’m not directly recruiting, but would I complain if they were both here? No. Absolutely not.”