Defensive coordinator Steve Wilks eager to get back to work after getting fired by Cardinals, jumped at chance with Browns 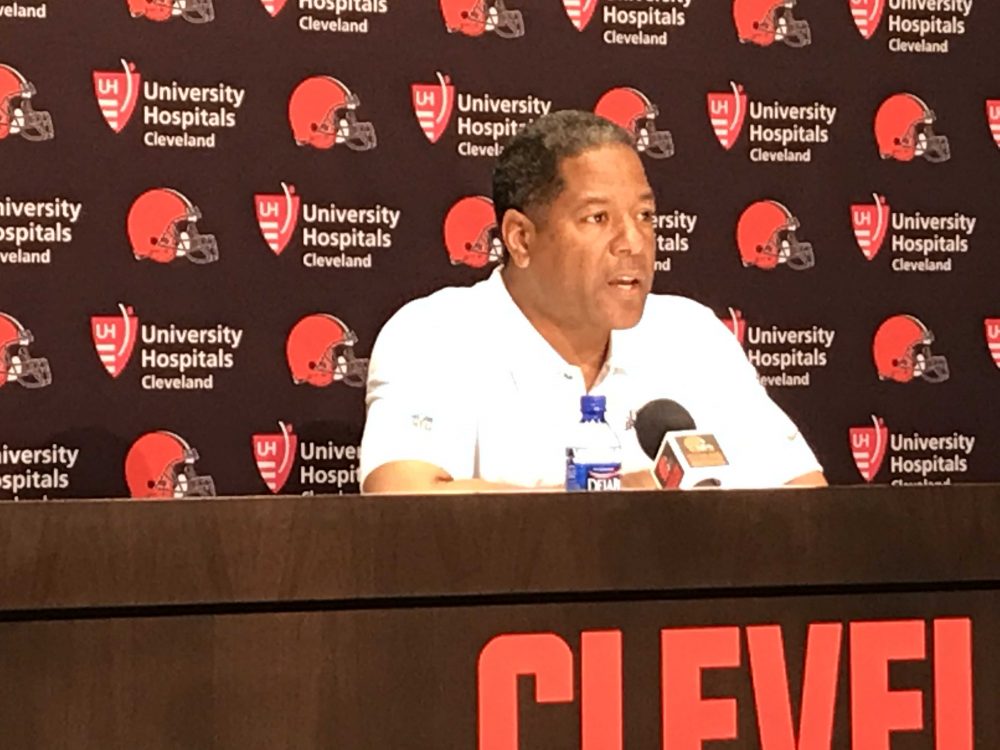 Steve Wilks was disappointed he didn’t get a longer opportunity as Cardinals head coach. But when he was fired after going 3-13 in his lone season in the desert, Wilks didn’t hesitate to look for a job as defensive coordinator.

“That is just what I love to do and having the passion and love to be around the game and, to be honest, when things like that happen you want to get right back to work,” he said Thursday at an introductory news conference. “I was very excited to do that and most importantly do it here.”

Wilks, 49, was wanted by other teams but picked the Browns as his first interview. He didn’t make it to No. 2.

“When you look at personnel and the direction with the things that (General manager John) Dorsey is doing and his crew, it was a no-brainer,” he said. “When you are looking at the opportunities that I had out there, I wanted to be here and I am glad that things worked out.”

Wilks refused to rip the Cardinals organization, saying it’s a production business and they didn’t win enough games. He believes his time in charge will make him more of an asset to first-time head coach Freddie Kitchens.

“That is the communication coming in daily on the things we are doing, whether it is scheduling or whether it is the pitfalls that come up as a head coach,” Wilks said. “I talked to him about some of the things already that you are going to get pulled away with, things that really don’t have anything to do with football. Our makeup as coaches, we want to be in there scheming, talking ball, getting with the coaches and being around the players, but there are so many other things that may come up. Being around him, I can definitely help him out with those things.”

Wilks coached defensive backs for years and was associate head coach with the Panthers from 2015-17, including serving as defensive coordinator in 2017. He said he’s had a chip on his shoulder since his start in Division II, so the firing doesn’t give him extra motivation.

“I am about trying to be the best that I can be at my craft,” he said. “I want to try to make this defense the best in the National Football League.”

“I like guys that strive to be great and I think that Steve does that,” he said last month.

The Browns defense ranked 30th in yardage (393.0) and 21st in scoring (24.5 points) in 2018 under coordinator Gregg Williams, who wasn’t retained despite going 5-3 as interim coach. Wilks will keep the 4-3 scheme, which should make the transition to a new staff and playbook much simpler for the players.

“It is going to be more terminology and really trying to get those guys to understand how we do things and how we call it,” he said.

He stressed his scheme will be aggressive and multiple, with the flexibility to adapt every week to the opponent and game plan.

“It is all about trying to create negative plays on first and second down so you can get exotic in some of your third-down pressures and things you want to do,” Wilks said.

He’s excited about the roster he inherited and is eager to add more pieces. He wants to take Pro Bowl end Myles Garrett to the next level and further develop cornerback Denzel Ward, who made it to the Pro Bowl as a rookie but suffered two concussions at the end of the season. They will work on making his tackling technique safer.

Notes: Wilks wants Garrett to be All-Pro, consistent every week

Jabrill Peppers took a leap in his second year after moving to the more comfortable strong safety spot. Wilks expects even more from him.

“I think he is a guy that is going to be able to fit well within our system,” he said. “You have to have guys that have linebacker traits but also DB skills because the game is so fast and they try to spread you out. You need those guys that are athletic in space, and I think he is going to bring that element.

“I’m very intrigued to work with him and see if we can really get him going in the system and the schemes that we have done before, whether it has been Budda Baker at Arizona or Shaq Thompson at Carolina. I think he has that same skill set.”

Wilks said stopping the run will be a priority, with an emphasis on gap integrity, technique and fundamentals. He wants to pick up where Williams’ defense left off in creating turnovers, ranking second with 31 takeaways.

“It is very important, and that has been a part of my background and my makeup ever since I came into the league with the Chicago Bears,” Wilks said. “We pride ourselves not only on taking the ball away but scoring on defense. We just want to be able to build on what those guys did last year.”