Despite violent video, torn ACL, Mississippi State DT Jeffery Simmons could be “too tempting” for Browns to pass on at No. 17, says NFL Network’s Daniel Jeremiah 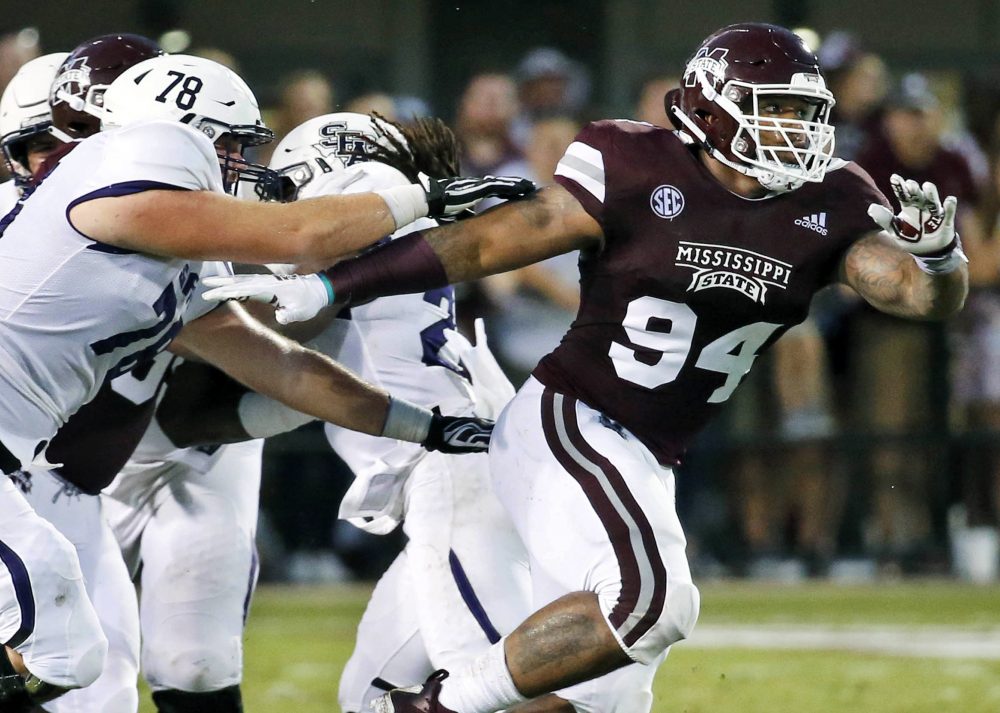 Would general manager John Dorsey bring in another player caught on video striking a woman?

Is the Browns’ rebuild far enough along for Dorsey to draft someone in the first round who probably won’t play as a rookie?

He might have to answer those questions if Mississippi State defensive tackle Jeffery Simmons is still on the board when the Browns pick at No. 17. NFL Network draft analyst Daniel Jeremiah thinks the Browns could be in that position and tempted to take Simmons.

“If healthy — now he’s coming off the ACL, just happened — he’s a top-five player in the draft, no doubt,” Jeremiah said Monday on a conference call. “To me, he’s one of the three best players in the whole draft.

“So if you look at John Dorsey and kind of going on upside and trying to go for it and be aggressive, that’s kind of his mantra as of late, Jeffery Simmons would be a home run pick.”

Simmons (6-foot-4, 300 pounds) tore the anterior cruciate ligament in a workout early this month and could miss the entire 2019 season following surgery. Even if the Browns are willing to accept that, they must consider a disturbing incident he had in high school.

Simmons was caught on video punching a woman several times as she lay on the ground. He later said he was defending a family member in an altercation but regretted his actions. He pleaded no contest to simple assault, was found guilty of malicious mischief and fined.

The Browns dealt with some public relations backlash after signing running back Kareem Hunt on Feb. 11. He was cut by the Chiefs on Nov. 30 after video was released of him shoving and kicking a woman at The 9.

Dorsey has shown throughout his career he’s willing to provide second chances for the talented.

“Everything I’ve been told by people that have gone to the school there at Mississippi State, he’s been a model citizen,” Jeremiah said. “There have been absolutely no issues there. He’s been on the honor roll. You won’t find anybody to say anything bad about him. But they have to kind of navigate through that.

“But as a talent, where they’re picking, if for some reason at 17 Jeffery Simmons was there, even though you have to potentially redshirt him for the year, that might be too tempting to pass up in that situation.”

Simmons won’t be at the scouting combine this week after the surgery, but here are a few things to watch at the event in Indianapolis, which begins Wednesday with interviews and ends Monday.

For the first time in what feels like forever, the Browns don’t head into the combine desperate to find a starting quarterback.

Let that sink in for a minute.

While the Browns and their fans can focus their attention elsewhere, the rest of the league will still be obsessed with quarterbacks, starting with Oklahoma’s Kyler Murray. He replaced Baker Mayfield and won the Sooners’ second straight Heisman Trophy but will face a multitude of questions from NFL teams.

The comparisons with Mayfield are natural — who would’ve thought Mayfield would have a distinct height advantage — and Jeremiah revealed his rankings of quarterbacks from the 2018 and ’19 classes, based on his grades after their college careers.

His top three were in last year’s class — Sam Darnold, Josh Rosen and Mayfield — followed by Murray in a tie with Josh Allen, who was picked by the Bills last year.

Ohio State’s Dwayne Haskins is the toughest competition for Murray in the battle to be the first quarterback drafted. It’s a big honor, and Jeremiah believes Murray has pulled in front in the close race.

“Prototypical size for Haskins, pure pocket passer, can make every throw,” Jeremiah said. “Really turned it on late in the year, which was good to see.

“Kyler Murray can do a lot of the things that Dwayne Haskins can do throwing the football, but then Kyler has that extra element with what he can do athletically.”

Haskins will see plenty of familiar faces, with nine Buckeyes teammates invited to the combine.

Defensive end Nick Bosa, who’s expected to be the No. 1 pick despite missing much of the season after surgery on a core muscle, leads the contingent. Receivers Terry McLaurin and Parris Campbell and defensive tackle Dre’mont are other intriguing prospects.

Kentucky tight end C.J. Conrad, a Keystone graduate, received the coveted invite to Indianapolis. Now he has to take advantage as he tries to improve his draft stock.

His week will be busy. He’s scheduled to interview with teams Wednesday through Friday, bench press 225 pounds as many times as possible and talk to the media Friday, then run the 40 and go through positional drills Saturday.

Conrad is part of a deep and talented tight end group and the scouts will be watching to see how athletic he is.