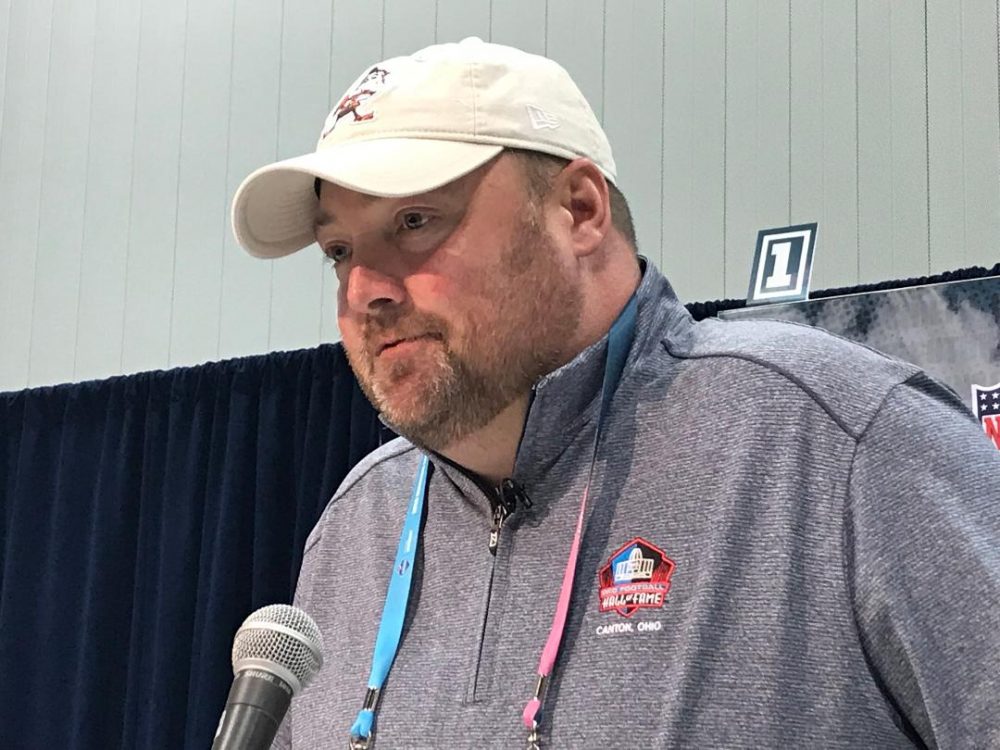 INDIANAPOLIS — The challenges of signing with his hometown team are serious and obvious for Browns running back Kareem Hunt as he tries to turn around his life.

He was cut by the Chiefs on Nov. 30 after a video was released of Hunt shoving and kicking a woman. The ugly incident happened last February at The 9 in downtown Cleveland.

His family remains in Northeast Ohio and has a long history of criminal behavior and jail time. The history is fresh, too.

His father, also named Kareem, was arrested in Elyria on Jan. 23 and admitted selling a small amount of crack cocaine and marijuana for profit, according to the police report.

Despite questions about Hunt being able to make the necessary life changes in a difficult environment, new coach Freddie Kitchens believes the return home offers the chance for the greatest redemption.

“We want to truly support him in every way moving forward,” Kitchens said Wednesday at the scouting combine. “In saying that, there’s a great opportunity in Cleveland, that he can change and impact more lives in Cleveland by making this turnaround and moving forward.”

“We do not ever condone what happened,” Kitchens said. “Kareem Hunt has an opportunity in Cleveland that he wouldn’t have in other places. Kareem Hunt used to play on the football field before the Cleveland Browns. He grew up like that. So maybe Cleveland supports Kareem like the Cleveland Browns are going to support Kareem. And maybe that’s what he needs to live the rest of his life after football.”

The Browns signed Hunt on Feb. 11. General manager John Dorsey called the incident at The 9 “egregious” and said he was “appalled,” but also reiterated his believe in providing second chances. Dorsey drafted Hunt out of the University of Toledo in the third round in 2017 as GM of the Chiefs.

“Right now Kareem Hunt is a Cleveland Brown and it’s our job to support him to be a better person,” said Kitchens, who was discussing Hunt for the first time. “Listen, at some point football is going to end for all these guys, and it’s our job as coaches and as people and as mentors to give them something to do in a good nature the 50 years after the fact that their football careers have ended.

“We’re in the people business to make him a better person and give him the resources and the support system that he needs to become a better person.”

The Chiefs cut Hunt the same day the video was made public by TMZ. They said he had lied to them about what happened.

“Most important is I care about Kareem just that his life is in order, that’s the important thing,” he said. “And he’s worked hard at that. So John doesn’t miss that. John understands how that works and he’s sensitive to that.

“I think Kareem’s in good hands and I think he’s going to do a great job when he gets around to having that opportunity to play again.”

The Browns received criticism for adding Hunt, especially so soon after he was released. But Reid said Hunt’s headed down the proper path.

“I’m into second chances if guys do the right steps to get there,” he said. “If you’re wrong, we’re lucky enough in this country where you can right a wrong. And normally somebody will give you an opportunity if you handle it the right way.

Hunt is expected to be suspended by the National Football League but the punishment hasn’t been announced.

Dorsey said Feb. 11 he expected Hunt to participate in the start of the offseason program April 1, and Kitchens said he’s talked to Hunt on several occasions inside team headquarters. He said Hunt is getting help inside and outside of the organization.

“We have to have support system in place,” Kitchens said. “Kareem has to be willing, has to show remorse and be willing to make a change. And he’s shown us that.

“In a lot of ways you know it’s more important for Kareem to make those advances and to evolve into a better person in his hometown. That’s where he’s going to do the most good. We never justify anything that’s happened, but there’s some good that can come out of this if he keeps evolving and keeps doing the things he’s supposed to do to become a better person. And we’ll worry about the football stuff later.”

Kitchens said Hunt needs to avoid spending time with negative influences, which might be more difficult back home.

“That all goes with decision-making and you have to make decisions in your life on people you associate with and people you don’t,” he said. “You’d like to surround yourself with people that have your best interests in mind, no different than me or anybody else.”

Dorsey has a history of picking up players with character concerns. The most obvious example is when he drafted receiver Tyreek Hill in Kansas City in 2016 after Hill had pleaded guilty to choking his pregnant girlfriend. Hill has remained eligible with the Chiefs while earning three trips to the Pro Bowl.

“Tyreek’s done a nice job of staying on top of himself with that,” Reid said. “Do we communicate with him? Yes. And we have things set up for him if there’s issues, but he’s been phenomenal.

“Every team has that but it gives you confidence in human beings that they can make a change when they put their mind to it and do things the right way.”

That’s the hope for Hunt. In his hometown.

Despite violent video, torn ACL, Mississippi State DT Jeffery Simmons could be “too tempting” for Browns to pass on at No. 17, says NFL Network’s Daniel Jeremiah
Manziel era ends in Canada as former Browns QB released, barred from CFL