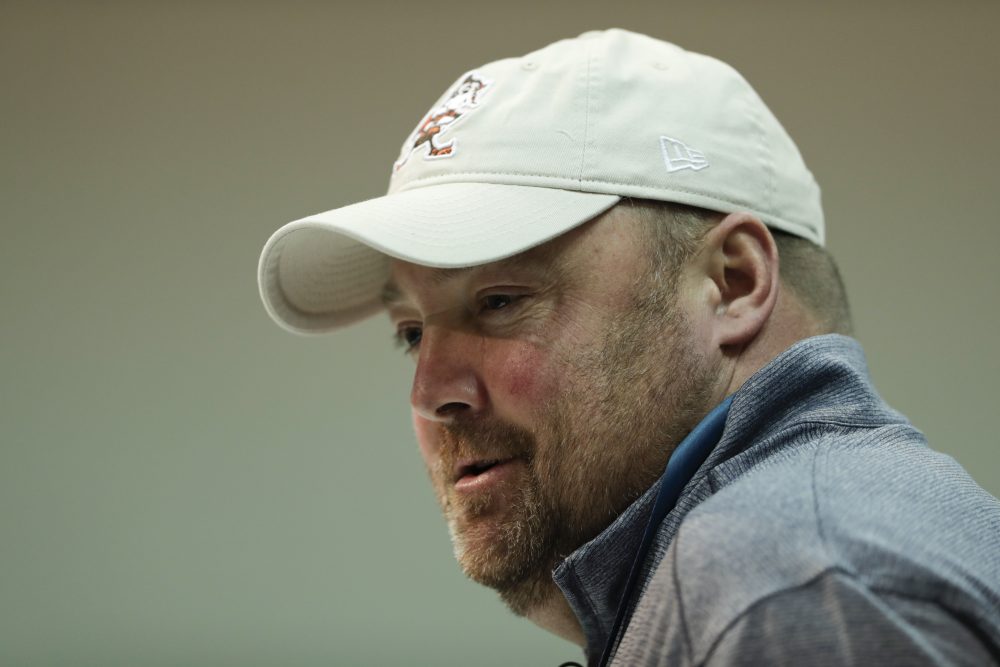 INDIANAPOLIS — Freddie Kitchens stopped to talk to Super Bowl-winning Eagles coach Doug Pederson. He was a guest on NFL Network and SiriusXM Radio. He drew a nice-sized crowd for his news conference at the podium.

Kitchens, hired by the Browns in January after an unlikely two-month rise from running backs coach, didn’t seem intimidated on the national stage for the first time as a head coach.

In fact, he opened the scouting combine by doubling down on his lofty expectations, again bringing up the Super Bowl for a franchise that’s never been to one and is only 14 months removed from the second 0-16 season in NFL history.

“The narrative’s changing in Cleveland. It changed the second part of the year, but it’s going to change moving forward also.”

The Browns went 7-8-1 last year, boosted by a 5-2 finish with Kitchens as offensive coordinator. He said he liked being able to interview draft prospects at all positions in his new role.

“So that’s the exciting point, and that’s how things have changed mostly for me,” he said.

Not exactly. He was stopped often by national media and earned a spot on Podium 1 inside the giant interview room, things that don’t happen to an assistant coach.

Buccaneers coach Bruce Arians, who was Kitchens’ coordinator at the University of Alabama and his boss with the Cardinals, said Kitchens is ready for the step up.

“No doubt. He’s a leader. He’s tough as nails. He’s one of the toughest players I ever coached in college, and he’s paid his dues,” Arians said. “He’s more than ready, and what he did last year I think proved how he can handle offense. And I think his personality will fit Cleveland perfectly.”

Cardinals general manager Steve Keim worked with Kitchens for 11 years and said he’s the right guy to take the Browns to the next level.

“Freddie is not only extremely knowledgeable but he’s got a certain way that he connects with players and he makes it fun as well, which I love about Freddie,” he said. “It’s hard enough to win at this level and to go through the daily grind but to do it with somebody who has got passion like Freddie does and has such a love for the game to me certainly is extremely valuable and I think the Cleveland Browns are going to continue to ascend under Freddie.”

Giants general manager Dave Gettleman had some bad news for fans dreaming of a Jarvis Landry-Odell Beckham Jr. reunion in the Browns receivers room, buoyed by recent rumors that the Giants are open to dealing the superstar.

“I’ll say this, it’s a repeat of what I said at my postseason presser: We didn’t sign Odell to trade him. OK?” Gettleman said of a five-year, $90 million deal signed before last season.

Fans distraught over the Gettleman comment may take solace in remarks from Steelers general manager Kevin Colbert, who didn’t rule out trading receiver Antonio Brown to an AFC North rival.

“Ideally you want to trade him to somebody you will never play, which you can’t know,” Colbert said. “The less you would have to play against him the better, but if a team comes through with the best compensation we have to balance that out.

“OK, we have to play him twice a year but we are going to get the best compensation, so then it’s our job to do the better job with the compensation. You have to weigh all that into the discussions. We haven’t eliminated anybody.”

Drew Stanton, 34, was the No. 3 quarterback last season and didn’t take a snap. With backup Tyrod Taylor headed out the door in free agency, Kitchens was asked if Stanton could serve as the No. 2 or the Browns needed to find an improvement.

“We’re always trying to add and upgrade the position as a whole. But Drew Stanton’s last 16 games that he started in the National Football League now, he’s 10-6. So we feel like Drew can play,” he said. “Drew’s not there to be a secular coach or whatever. Drew can play. So if there’s somebody out there that betters our football team, I’m sure that’s what John and his staff and the coaches will do.”

Receiver Breshad Perriman is eligible to become a free agent March 13. The Browns would like to re-sign him, but he may choose to test the market.

“Breshad’s a good football player,” Kitchens said. “Breshad had more success with us than he has with anybody else so, of course, we’ve got plans for Breshad moving forward and hopefully we get him back.”

Perriman (6-foot-2, 211 pounds) was the No. 26 pick of the Ravens in 2015 but missed his rookie season with a knee injury and caught only 43 balls in the next two seasons before being cut. In 10 games and two starts with the Browns last season, he caught 16 passes for 340 yards, a 21.3 average and two touchdowns.

Left tackle Greg Robinson on Monday signed a one-year, $7 million contract to return in 2019 and avoid free agency. All five starters on the line are slated to return.

“Greg was a big boost for our offensive line, everybody knows that,” Kitchens said. “But what I like about Greg the most is the type of competitor he is. And he competes on a day-in, day-out basis and we need players like Greg Robinson to get to where we want to go.”

Notes: New defensive coordinator Steve Wilks wants to take Myles Garrett to the next level
Notes: Browns hoping for extension with WR Breshad Perriman, will meet with agent at combine