Notes: Browns hoping for extension with WR Breshad Perriman, will meet with agent at combine 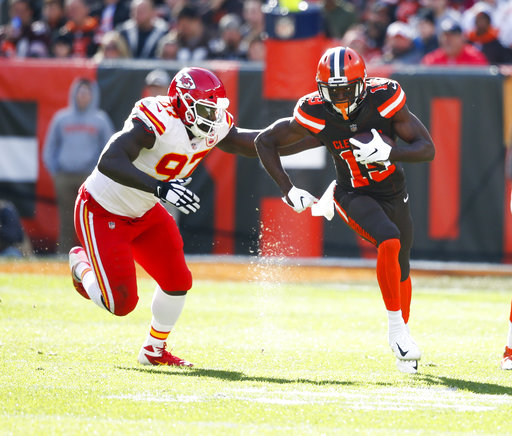 INDIANAPOLIS — If the Browns are going to keep receiver Breshad Perriman from reaching free agency, a conversation with agent Drew Rosenhaus this week will be key.

Perriman is eligible to become an unrestricted free agent when the league year starts March 13, but the Browns would like to sign him to an extension before he hits the market. The team and Rosenhaus have had discussions but a deal remains elusive.

Dorsey said he’d meet with Rosenhaus during the scouting combine.

“We’ve had numerous conversations with his agent,” Dorsey said Thursday. “I’ve spoken to him directly and he’s expressed a willingness to be here in Cleveland.

“So I think what you do is you let that process unfold. I would love to have that player here. We’ll wait and see at the proper moment.”

Perriman, 25, was signed off the street Oct. 13 after the Browns suffered a rash of injuries at receiver. He was a pleasant surprise, making two starts in 10 games. He caught 16 passes for 340 yards, a 21.3 average and two touchdowns.

Perriman, the No. 26 pick of the Ravens in 2015, has sprinter’s speed and good size (6-foot-2, 211 pounds). The Browns are already in the market for another receiver, and the need would increase if Perriman left.

He was considered a bust in Baltimore — 43 catches, 576 yards, three touchdowns in two years and another missed with injury — and was cut before last season.

“Breshad’s a good football player,” coach Freddie Kitchens said Wednesday. “Breshad had more success with us than he has with anybody else so, of course, we’ve got plans for Breshad moving forward and hopefully we get him back.”

After the Browns signed running back Kareem Hunt on Feb. 11, Dorsey said third-down back Duke Johnson wasn’t “expendable yet.” He tried to walk back the last word Thursday.

When pressed, Dorsey called Johnson “a really good player” and said he was “absolutely” committed to him going forward. Johnson was Nick Chubb’s backup for most of last season, rushing 40 times for 201 yards and catching 47 passes for 429 yards and three touchdowns.

“I mean, there’s teams in the National Football League that actually we’ve evolved now to where it’s a three-headed monster,” Dorsey said. “So if that helps your offense score points, why not do it?”

Dorsey said the NFL hasn’t notified the Browns of punishment for Hunt following its investigation into three off-field incidents. The most notable came at The 9 in Cleveland, with a video showing him shoving and kicking a woman.

“I think right now the league is in the final steps of making determinations,” Dorsey said. “At the appropriate time, they’ll contact us and let us know.”

Dorsey wouldn’t divulge his plans, but the Browns are expected to tender Higgins at his original round (fifth) and not tender Boddy-Calhoun.

With the tender of Higgins, the Browns would be allowed to match any offer he agreed to with another team or receive a fifth-round draft pick if they allowed him to leave. If he’s not tendered, Boddy-Calhoun would be free to sign with anyone and the Browns would have no right to match and receive no compensation in return.

The tender must be placed by March 13.

Greg Robinson will return at left tackle after signing a one-year, $7 million deal Monday. Dorsey said the short-term deal gives Robinson the opportunity to earn a longer one.

“Absolutely,” he said. “When Greg stepped in to his role as the starting left tackle, I thought he did a great job. The one thing I admire about him is how competitive he is. We tend to forget he’s only 25 years old. I couldn’t be happier in terms of keeping those five (starters) together and beginning to keep that foundation in place. I think that’s really important.”

But Dorsey wouldn’t rule out drafting a left tackle, possibly in the early rounds.

“We’ll look at every position in this draft and that would definitely be one of them,” he said.

Dorsey complimented the strength, size, route-running and hands of recently signed receiver Jaelen Strong (6-2, 220). He was out of football last year with a torn anterior cruciate ligament.

“I’m willing to take a shot because I think there’s some talent to unearth there,” Dorsey said.

** The Browns haven’t decided whether to sign a veteran or bring in an undrafted rookie to compete with kicker Greg Joseph.

** Dorsey said former NFL GM Scot McCloughan isn’t working for the team this draft. He was a consultant last year.