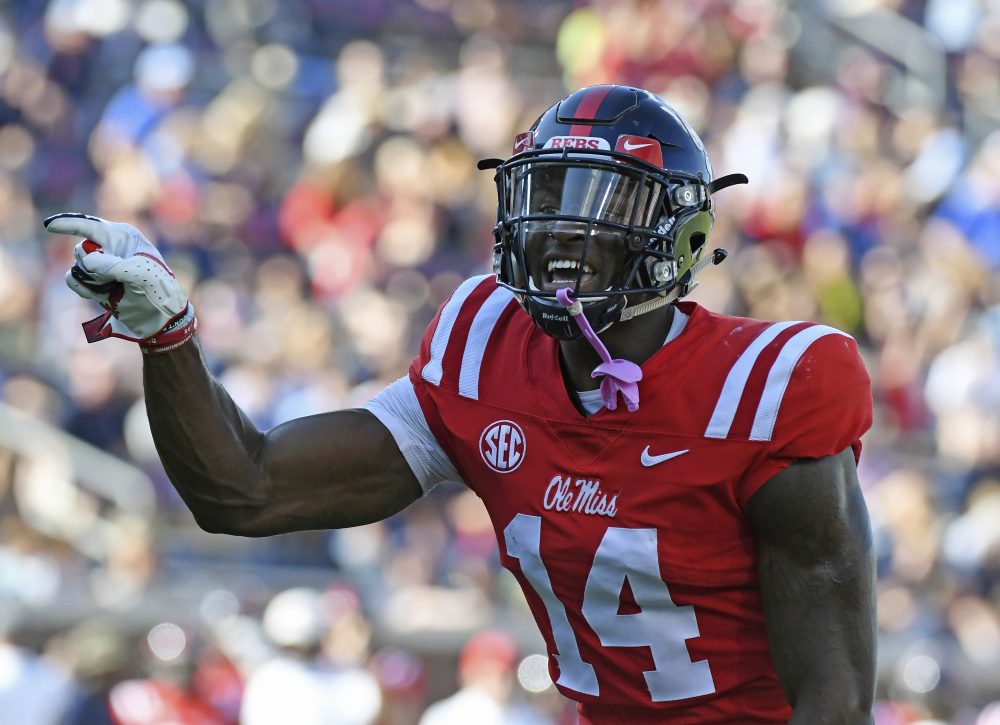 INDIANAPOLIS — The Browns could use size at receiver.

At 6-foot-3 3/8, a chiseled 228 pounds and 1.9 percent body fat, Metcalf is built like a house, according to Raiders coach Jon Gruden.

“Coming from him, makes me feel great,” he said Friday at the scouting combine. “Lets me know I’m doing good in the weight room.”

Metcalf, a cousin of former Browns running back Eric Metcalf, is in the mix to be the first receiver drafted. Oklahoma’s Marquise Brown (5-9 3/8, 166), the other top contender, is a completely different type of wideout.

Most of the Browns’ obvious needs are on defense, but depending on how the first half of the draft falls, general manager John Dorsey could consider Metcalf the best player available at No. 17. He would add a dimension Jarvis Landry (5-11, 196) and Antonio Callaway (5-11, 200) don’t have.

Metcalf said he shouldn’t be defined by just his size and muscular definition. He also brings speed and hands.

“I’m expecting to run fast (Saturday) and shock at lot of people,” he said of the 40-yard dash.

And the best part of his game?

Cleveland’s Baker Mayfield doesn’t throw a lot of bad balls, and Metcalf was asked what it would be like to play with someone like him.

“Just to play with a quarterback like Baker Mayfield is going to be great,” said Metcalf, who had a formal interview scheduled with the Browns. “You know, it’s just another blessed opportunity just to get drafted by the Cleveland Brown organization so I’m gonna take it one step at a time right now.”

The Metcalf genes are strong. His father, Terrence, played guard for the Bears and has been a valuable resource. Terry Metcalf, Eric’s dad, played running back and receiver for St. Louis.

“From the time I left Ole Miss, just hearing about, you know, Eric and Terry Metcalf and what they did in the league,” DK Metcalf said. “I mean, I’ve seen highlights of them and they were extraordinary players. But obviously my last name carries some weight.”

Oklahoma quarterback Kyler Murray said he won’t throw, run, jump or lift at the combine. Ohio State quarterback Dwayne Haskins said he never considered not throwing. That’s what he does.

“I was going to throw no matter what,” he said. “I’m going to throw really well tomorrow. So I’m just looking forward to showing I’m the best quarterback in the class.”

ESPN’s Stephen A. Smith took some grief on Twitter recently when he said Haskins was “more of a runner than a thrower, I could be wrong about that.” Haskins (6-3 3/8, 231) said he’s definitely wrong.

He threw for 4,831 yards and 50 touchdowns last season while rushing for 108 and four touchdowns.

“I can maneuver if I need to but I’m deadly in the pocket,” Haskins said after a laugh. “I was working out when I’ve seen that. My coach told me about it. I just laughed at it because obviously it’s not true. So whatever.”

While Murray (5-10 1/8, 207) is clearly the better runner, Haskins doesn’t agree with the perception he’s not mobile.

Murray matched Mayfield’s success at Oklahoma, taking over the starting role, leading the Sooners to the College Football Playoff and winning the Heisman Trophy.

“I learned a lot from Bake,” Murray said. “Aside from him being one of my good friends, it wasn’t really anything he told me as far as, ‘You need to do this to be good, you need to be that to succeed.’

“He knows talent when he sees it. We have this respect for each other off the field and on the field. I think more so getting to watch him operate, see how he works.”

Brown played with both quarterbacks at Oklahoma.

“Baker is more of a talker. Kyler is more, he lets his play do the talking,” Brown said. “They’re two different personalities, but they’re two great quarterbacks.

“Baker really motivated me to get out there and make plays. Baker always pushed me to be great and I love that guy.”

Browns strong safety Jabrill Peppers isn’t a suspect in any matter, but the Cleveland Division of Police is conducting an internal investigation as to whether proper procedures were followed after he reported a theft in January.

Sgt. Jennifer Ciaccia confirmed the internal investigation in an email to The Chronicle-Telegram. Cleveland.com was first to report it.

Peppers’ white Range Rover was broken into Jan. 29 in a garage on East 12th Street in Cleveland. The next day he reported stolen a 9mm Glock in a case, a $500 backpack, an iPad and sunglasses.

In a secretly recorded phone call with a man he said claimed to be Peppers’ uncle and financial adviser, lawyer Kevin Spellacy mentioned a homicide detective told him officers removed marijuana from the stolen backpack. The recording was posted on social media Thursday, but Spellacy told cleveland.com and ohio.com the marijuana reference was a joke and no drugs were found.

“At this time, the investigation does not have anything to do with marijuana or any other narcotics.

Marsha Carroll, a homeless woman suspected of the theft of Peppers’ property, died after a beating eight days following the theft. A man has been charged with the murder, according to cleveland.com.