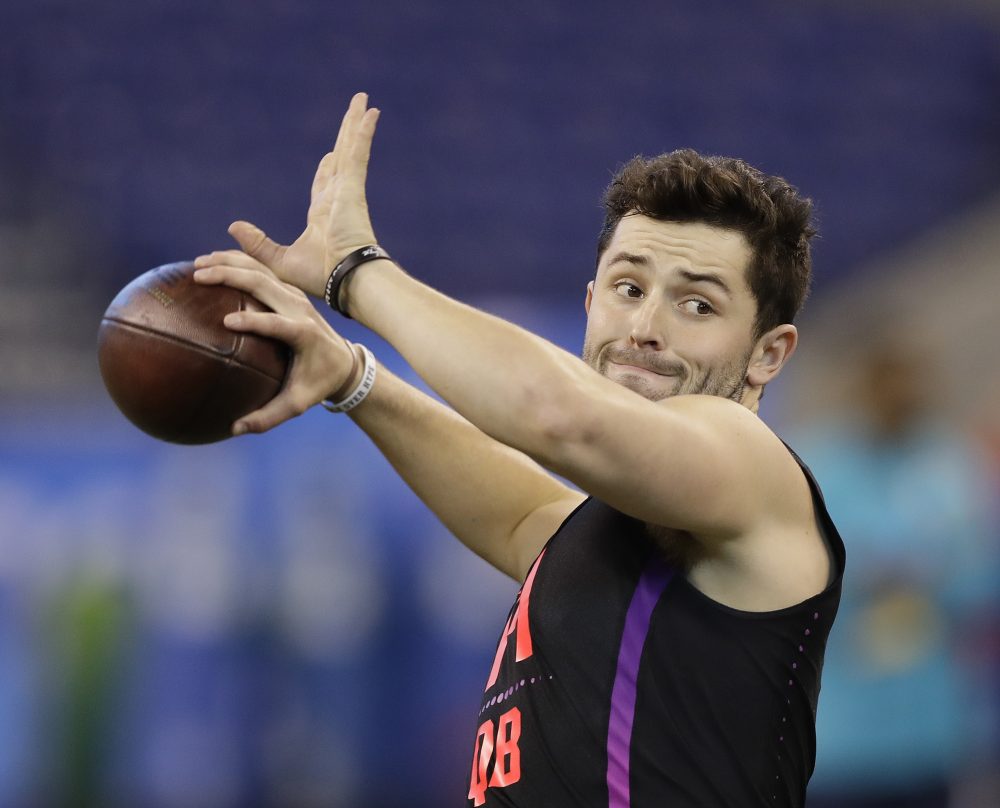 INDIANAPOLIS — Baker Mayfield was nowhere near the scouting combine this time around, as he continues to decompress and enjoy his offseason.

His presence was felt anyway.

A year ago, Mayfield confidently took the podium and declared himself the man to save the Browns.

“I think if anybody’s going to turn that franchise around it would be me,” Mayfield said.

He’s off to a strong start.

He played the critical role, as a rookie, in the turnaround from 0-16 to 7-8-1. The organization — along with plenty of fans — believes he’s the right guy to continue the revitalization and lead the march to the playoffs and, eventually, the Super Bowl.

If Mayfield wins the first Super Bowl in franchise history, he will become a Cleveland legend and earn a statue next to Jim Brown’s outside FirstEnergy Stadium.

His impact on the NFL might be even greater.

“I think Baker killed that myth a little bit last year about being too short,” Buccaneers coach Bruce Arians said this week.

If that’s true — if scouts, general managers and owners stop putting so much weight into a quarterback’s height — that would be a huge piece of Mayfield’s legacy. (This is assuming he winds up having a legacy. He’s played less than one full season and has beaten one team with a winning record, the Ravens.)

And it was considered a win.

A great number of people — including this quarterback “expert” — thought Mayfield would be good in the NFL but was simply too short to be the No. 1 pick just a year ago. (Luckily for the Browns, general manager John Dorsey trusted his evaluation and didn’t get distracted by a single measurable.)

Mayfield isn’t the first short quarterback in the NFL to have success. But Drew Brees didn’t change the perception. Neither did Russell Wilson. Or Michael Vick.

“I think that’s been proven to not be as much a factor as maybe it was years ago,” Raiders coach Jon Gruden said. “If you ask Russell Wilson or Brees, or the kid in Cleveland, I don’t know that it’s a true impact on the position or the performance.”

The NFL will always be about size, strength and speed. Bigger is better.

But at quarterback, in 2019 and beyond, height isn’t a deal-breaker. Mayfield made sure of that.

Here are a few more things we think after a long week at the combine.

** The most interesting thing Dorsey said was that he doesn’t think the Browns are ready to “go for it.”

That doesn’t mean they can’t win a Super Bowl this year. Teams exceed expectations, even their own, all the time.

But for those assuming the Browns will amass double-digit wins and make the playoffs, the man who knows the roster best says it’s not a finished product. And as free agency approaches, isn’t one player away from joining the elite.

The turnaround orchestrated by Mayfield was fun and necessary. It was also just a start.

Winless to Super Bowl takes time, and Dorsey deserves credit for respecting that. He’ll be aggressive again in the offseason. He’ll field a team capable of contending in the AFC North. He just won’t be reckless.

** With the successful roster overhaul of last offseason, Dorsey put himself in a position to be open to everything. That includes drafting a left tackle at No. 17 despite re-signing Greg Robinson.

I wouldn’t predict Dorsey spending his first-round pick on a position where he has a 26-year-old starter coming off a solid second half of the season. I just know Dorsey trusts his evaluations, and if Washington State’s Andre Dillard is the top player left on his board he wouldn’t be afraid to pick him.

** Speaking of keeping an open mind …

Mississippi State defensive tackle Jeffery Simmons likely won’t play as a rookie after recently tearing his anterior cruciate ligament. He was caught on video in high school repeatedly punching a woman as she lay on the ground, later saying he was defending a family member but regretted his actions.

Don’t rule him out for the Browns.

I’m convinced Dorsey would take him at No. 49 and even try to move up to get him in the second round. I think he would give him strong consideration at No. 17.

Given the chance to eliminate Simmons as a possibility, Dorsey refused.

I don’t think the video is the concern for Dorsey — even after taking a chance on running back Kareem Hunt last month — it’s not getting any production from a first-round pick as a rookie. But if Dorsey ranks Simmons as a top-five talent, he might be bold enough to make the move.