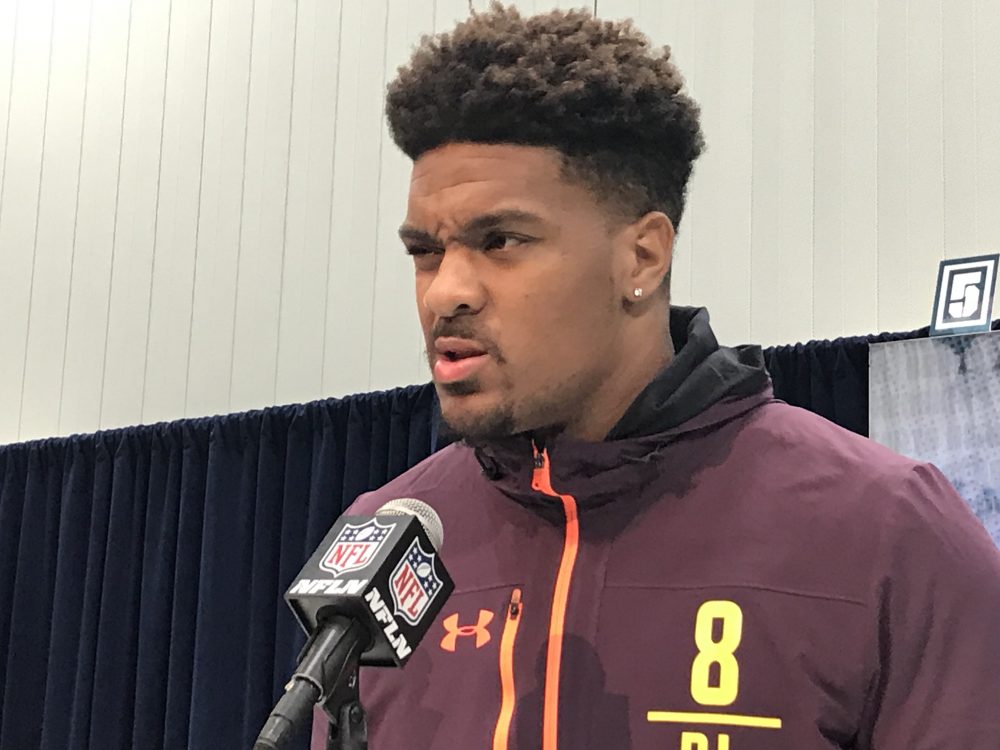 INDIANAPOLIS — In a draft class deep in dominant defensive tackles, Ohio State’s Dre’Mont Jones declared himself the best pass rusher in the group.

“It shows how confident I am in myself,” he said Saturday at the scouting combine. “I believe in myself. I’ve worked extremely hard and you can ask any other player at Ohio State and my coaches about how hard I work. I feel like I’m built for the moment.”

Ohio State defensive end Nick Bosa started the discussion when he labeled Jones the best interior pass rusher in the draft. Standing yards away from Alabama’s Quinnen Williams and Clemson’s Christian Wilkins — tackle prospects who could go in the top five — Jones wasn’t bashful about agreeing.

“I definitely feel that way. I’m not surprised that he feels that way,” said Jones, who’s 6-foot-3, 281 pounds. “I’ve been proving it in practice from Day 1 when we first met and we competed against the offensive line. And I definitely proved myself this year and in past years about my pass-rushing ability.”

He described his pass-rushing talent as “unique” and “uncanny.” Some analysts have him as a second-round pick, but he wants the spotlight of the first round.

“It’s very important,” he said. “I look forward to this all my life, I want to be there in Tennessee on the stage, holding up a jersey and smiling at the camera and just being proud of all my hard work.”

Jones is from Cleveland and went to St. Ignatius High School.

“Dang just realized this was my last season as a crazy Browns fan,” he tweeted last month with a “pensive face” emoji.

Unless the Browns draft the hometown kid. They have the Nos. 17 and 49 picks, and he had met informally with members of the organization.

“For me, that would be super surreal, being from that city,” he said.

“Yeah, just like I’m still a big Cavs fan even though we’re not that good yet,” he said, adding he was “very pumped” to see the Browns win last year.

Bosa, a candidate to be the No. 1 pick, is itching for the workout Sunday and to show teams he’s back to himself. He was injured against TCU in the third game of the season, had surgery to repair the core muscle and didn’t play the rest of the year.

“I’ve been talking myself up pretty good to them, so I’m definitely ready to get out on the field and definitely leave no doubt,” he said.

Bosa said he had a difficult time dealing with the injury physically and emotionally. Because it’s a core injury, everything was affected, from breathing and coughing to going to the bathroom. It also robbed him of his final season in Columbus and the chance to prove himself to NFL teams.

“When it happened, when I got home from that TCU game, I was laying in bed, I could barely get it. It was one of the darkest moments of my life so far,” he said. “It took me a couple months (to get over it). Just watching the games, watching the Team Up North game, all that was painful, even though we whupped ’em. That made it a little bit better, but it was tough.”

Mississippi State defensive end Montez Sweat (6-6, 260) is an option for the Browns at No. 17. He met with them during the combine and loves the idea of being the bookend to Pro Bowler Myles Garrett.

“Playing across from Myles Garrett would be a blessing,” he said. “I would just want to soak everything up from him. Just being an athletic freak and the pass rusher that he is, that would be great.”

Clemson end Clelin Ferrell said it would “mean the world” to be paired with Garrett.

“I know one thing, what I’d like to see, I’ll say it right now: Improve your run blocking,” Dorsey said Thursday. “Everything else from a pass-catching standpoint, I think David has got all the elements to be a really nice pass-catching tight end who can run after the catch. So I challenge him here today, you know what, improve your run blocking.”

“I love his passion. I love his competitiveness,” Dorsey said. “I mean, here’s a guy who’s willing to go work day in and day out to try to master his craft. I have high expectations, we have, moving forward and he rightfully has high expectations of himself.”