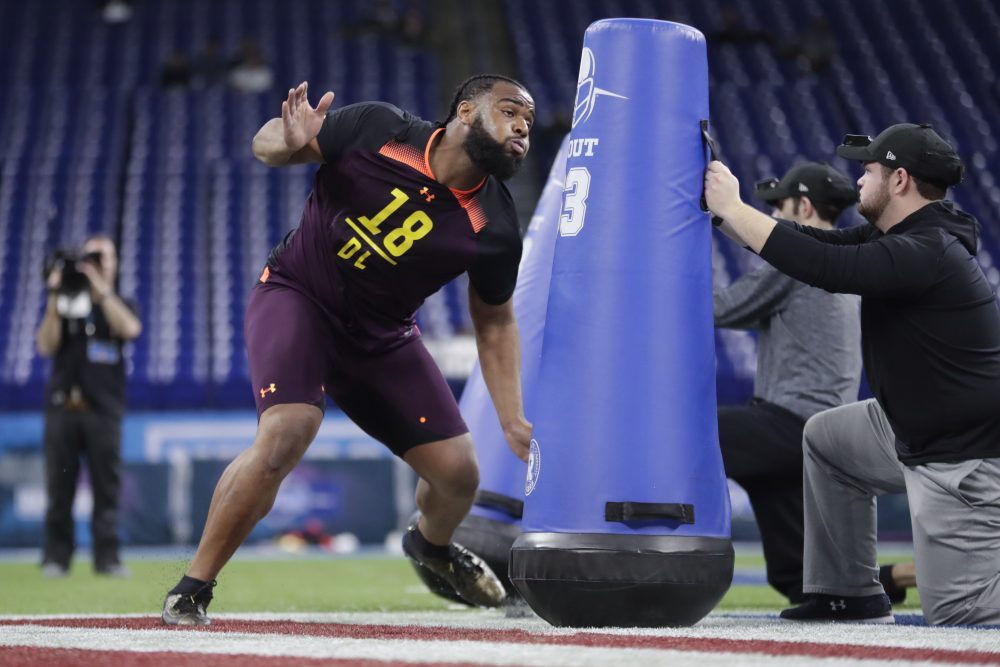 Impressive stats for sure, but not close to No. 1 on his resume.

Wilkins graduated in 2½ years with a degree in communications, then got a master’s in athletic leadership, all while playing at the highest level of college football.

“Just a lot of long, hot hours of studying and being committed to academics,” he said Saturday at the scouting combine in Indianapolis. “I wouldn’t do it again. It was hard. I was there all year long, too.

“I just figured make the most of my opportunity while I was there and while they were paying. And I just wanted to be prepared if I was in a situation where I was going to leave after my junior year, I at least had my degree.”

Wilkins (6-foot-3, 315 pounds) stayed and was a first-team All-American as a senior with 51 tackles, 14 tackles for loss, 5.5 sacks, a forced fumble and two fumble recoveries on the best defensive line in college football. Tackle Dexter Lawrence and end Clelin Ferrell are expected to join Wilkins in the first round of the draft, and end Austin Bryant and tackle Albert Huggins were also invited to the combine.

Wilkins is the top prospect among the pack, with NFL Network’s Daniel Jeremiah ranking him No. 4 in the draft class. He also led the way off the field, winning the William V. Campbell Trophy, which recognizes academic success, football performance and community leadership.

“He brings guys in with him,” Lawrence said. “He’s a great leader. He brought me in and that’s who I looked up to.”

The Browns are desperate for a three-technique defensive tackle to line up inside next to Larry Ogunjobi and collapse the pocket from the interior in the mold of Jacksonville’s Calais Campbell, Tampa Bay’s Gerald McCoy and Cincinnati’s Geno Atkins. End Myles Garrett needs more help in the pass rush, especially inside, where the route to the quarterback is the shortest.

“It could be something pretty lethal,” Wilkins said of a pairing with Garrett. “I just want to be the best player I can be so I can help any team hopefully kind of create that same culture and that same mindset, get everyone to the same level of accountability that I did at Clemson by bringing those tools and everything that worked for me there to a professional team.”

The Browns went from 0-16 in 2017 to 7-8-1 in quarterback Baker Mayfield’s rookie season. Wilkins believes he can help with the next step.

“I’d love to. I feel like I could be a guy who could do that,” he said. “I feel like they’ve done great for themselves, drafting the right players and turning things around and doing what they need to do as an organization. I think that was pretty awesome and pretty rare on their part.

“They’ve got guys like Myles Garrett and Baker who have done great. Drafting those guys kinda helped changing that culture. I feel like if I were to get drafted to that team I could be someone to help improve that new culture and that new winning ways and how they’ve improved and continue to help them do that.”

General manager John Dorsey said he wants to get “longer” across the front four to fit new coordinator Steve Wilks’ scheme. Wilkins doesn’t qualify at 6-3, but he shouldn’t be dismissed because he’s effective as a run defender and a pass rusher.

The Browns might need some luck for Wilkins to make it to them at No. 17.

“Christian Wilkins is very disruptive, as a pass rusher inside as well as a run defender just getting in the backfield generating some negative plays, generating pressure,” Jeremiah said on a conference call. “Quick hands, quick feet. He’s somebody that I think is going to be very highly thought of around the league because of his ability to play in the backfield.”

Wilkins described himself as fun-loving and “extremely committed.” The devotion was obvious in his academic pursuits.

“I took a lot of class, it’s just all about time management and what you do with your time,” he said. “Just knowing what’s important. Didn’t have the biggest social life because it was academics and football, sleep and eat. That’s kind of my days. But I enjoyed it. I had a lot of fun being around the guys.”

He set an example in the classroom that extended beyond school and the football field.

“That’s just a basis of motivation for me to give people hope,” he said.

Freddie Kitchens happy Baker Mayfield is taking a break from football, wants him refreshed and ready to take jump in Year 2
Baker Mayfield excited to have Odell Beckham Jr., embraces his powerful personality: “You don’t want to tame it”