Mailbag: Does John Dorsey have another big trade up his sleeve? How many picks will Dorsey make? Is Clay Matthews a fit? 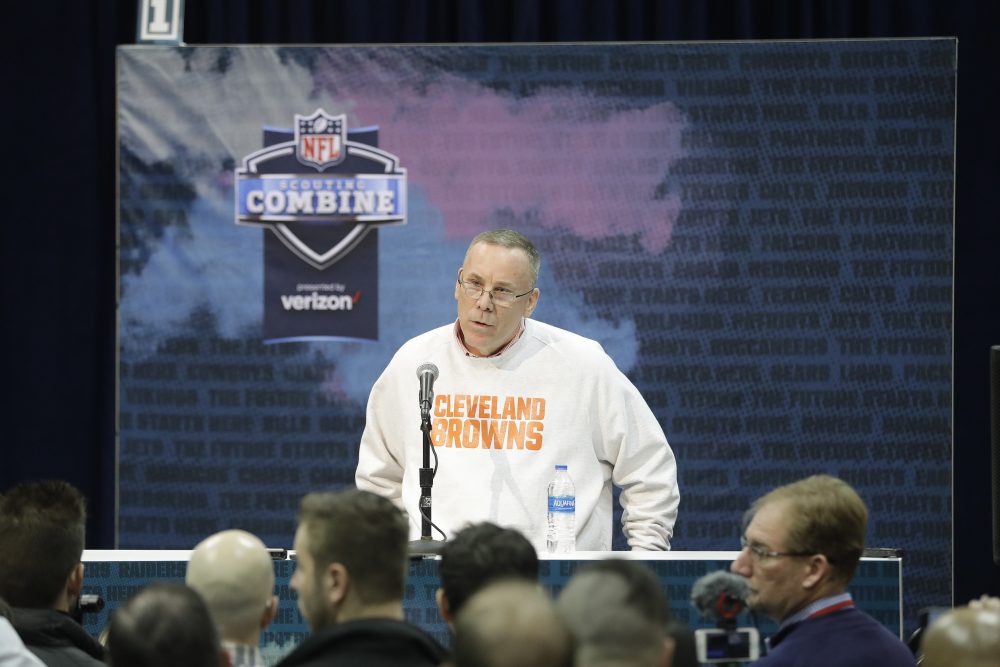 Q: Since general manager John Dorsey has said he doesn’t believe in breaking the bank in free agency, do you think we could see a blockbuster trade for a high-impact player?

A: You sent the question before the internet went wild with Odell Beckham Jr. speculation.

My answer is the same then and now: without a doubt.

However, I’m not convinced Dorsey’s target is Beckham. Yes, he’s a top-five receiver in the league, but almost $70 million remains on his contract, including $31 million over the next two seasons, and the Browns would likely have to give up multiple draft picks, including at least one first-rounder. I don’t believe the Giants would want guard Kevin Zeitler or running back Duke Johnson — and I wouldn’t be in any hurry to trade either.

So if we think Dorsey will pull off another trade — he doesn’t get enough credit for getting free safety Damarious Randall in exchange for quarterback DeShone Kizer last March — the trouble is figuring out whom he covets. I’m not privy to a list of names but believe he’d target a defensive end, linebacker, cornerback or receiver.

I fully expect to be surprised by a trade as free agency gets going next week.

Q:
How many picks do you think the Browns will actually make in this year’s draft and who is the one player you could see them moving up to select. Is a two-fer permitted?

A: Yes, two-in-one questions are allowed.

The Browns have 10 picks, including four in the first three rounds. With a young roster and playoff expectations, I don’t expect GM John Dorsey to make any more than seven selections.

As for the one player Dorsey may want enough to move up, I’ll say Mississippi State defensive tackle Jeffery Simmons. I don’t think Dorsey would use the No. 17 pick on a guy who likely won’t play as a rookie after tearing an anterior cruciate ligament and who has character concerns, but I could see him move up from No. 49 in the second round if Simmons makes it to No. 35 or 40.

The other scenario I see for an early trade-up would be moving inside the top 15 for LSU linebacker Devin White. I don’t know if Dorsey loves him, but that’s a position of need and White appears to be the clear-cut top choice.

Q: Is it likely that #InDorseyWeTrust pulls off an exchange of troubled talent to move linebacker Jamie Collins and add a second-round or better pick? Would Collins be worth a late first-rounder, or an unhappy WR?

A: Sorry I didn’t get to this before Collins was released Wednesday. But the fact the Browns cut him rather than trade him — especially with no time crunch regarding his salary — speaks to the lack of interest in Collins and the Browns’ desire to part ways.

Media and fans are often guilty of overvaluing the players on their teams. In this case, Collins is talented enough to bring back a third-round pick in a trade, but his $10.5 million salary for 2019 was too much for another team to swallow.

Q: The vet OLB I still feel fits well here and has an invitation to evolve his profile in the mode of his father’s all-around game is Clay Matthews. Though he’s primarily been a 3-4 edge rusher for the Packers, he played in the 4-3 at USC and has a well-rounded skill set to help lead a young defense here in Cleveland. Like dad, he’d be consistent, always in the right place, dependable, heady, alert, mobile, physical, clutch and beloved by the fan base. A spirited playmaker, leader, winner and difference-maker.

The Browns surely could use prototypical developmental additions at MLB and WOLB, but they don’t need a raw, unproven youngster in the strongside spot Collins has vacated. Clay is virtually ideal and may well be endorsed by the Green Bay administrators now working in Berea.

And the romance would go over well in NE Ohio, though that would not justify the maneuver.
— Mark Leonard

I strongly feel the Browns should sign a veteran pass rusher to pair with Myles Garrett and teach him a few things. I’d prefer that comes in the form of a defensive end rather than outside linebacker.

But I won’t dismiss Matthews out of hand, even though he’ll turn 33 in May. Perhaps Cleveland is the right place for a bounce-back following a career-low 3.5 sacks in 2018 despite starting all 16 games. But in the 4-3 scheme of the Browns, Matthews must still be able to run with a tight end.

Mailbag: What move would jump Browns to top of North? Who’s the can’t-pass-up player in draft? Why did John Dorsey give up on Jason McCourty?
Mailbag: Will Kareem Hunt become the No. 1 RB? Is the salary cap becoming a concern? Over or under 8.5 wins?