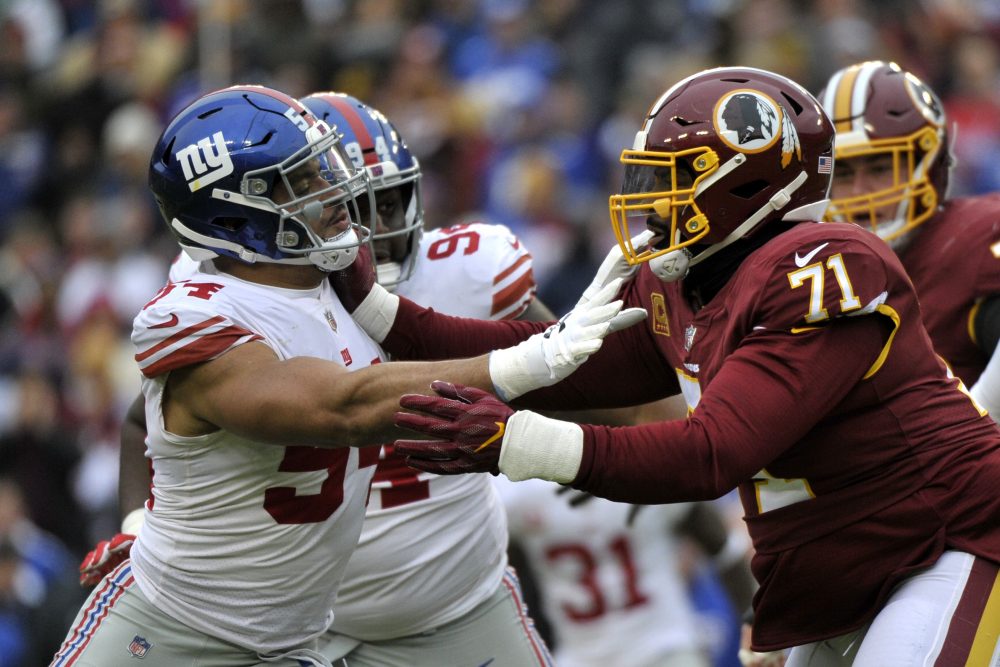 The Browns had an obvious need for an edge rusher to complement Pro Bowl defensive end Myles Garrett. They had a logjam on the interior of the offensive line.

The Browns agreed to a trade in which they will acquire defensive end Olivier Vernon from the New York Giants in exchange for right guard Kevin Zeitler. The Browns will also receive pick No. 132 in the fourth round of the draft and the Giants get No. 155 in the fifth round.

A league source confirmed the terms of the deal to The Chronicle-Telegram, but the trade can’t be official, and the team can’t comment, until the league year starts Wednesday.

The trade shouldn’t come as much of a surprise. Last year in his first offseason as Browns GM, Dorsey made three significant trades before the league year began, adding receiver Jarvis Landry, free safety Damarious Randall and quarterback Tyrod Taylor.

A side note to the deal Friday was that it didn’t involve Giants superstar receiver Odell Beckham Jr. Talk radio and the internet were abuzz for much of the week with speculation he was headed to Cleveland.

Instead, the Browns got a pass-rushing defensive end to bookend Garrett. They also cleared the way for Austin Corbett, the No. 33 pick last year, to step into the starting lineup in place of Zeitler.

With the free agent market for ends depleted by teams using the franchise tag — Seattle on Frank Clark, Dallas on DeMarcus Lawrence, Houston on Jadeveon Clowney — Dorsey went the trade route to land a talented and proven commodity.

The Giants wanted to unload his contract that calls for a $15.5 million salary in each of the next two seasons. The Browns can absorb that, with more than $70 million in salary cap space even after the trade.

Vernon (6-foot-2, 262 pounds) was a third-round pick of the Dolphins in 2012 and joined the Giants in 2016 after signing a five-year, $85 million free agent deal, the richest in league history for a defensive end.

He played and started 39 games in three years with New York, totaling 22 sacks, 131 tackles and four forced fumbles as he was slowed by hand and ankle injuries. He missed the first five games last season with a high ankle sprain, then had seven sacks in 11 games and made his first Pro Bowl.

Vernon was moved to outside linebacker in New York’s 3-4 scheme last season but is expected to go back to end in Cleveland’s 4-3. His addition could make Emmanuel Ogbah expendable. The No. 32 pick in 2016 has 12.5 sacks over three years, including only three in 14 games last season.

Zeitler is one of the league’s top guards and was Pro Football Focus’ top-ranked pass blocker at the position for 2018. Zeitler, who turned 29 Friday, spent two years with the Browns after signing a five-year, $60 million free agent deal to leave the Bengals. Three years and $32 million remain on the contract.

Zeitler didn’t miss a snap in two years with the Browns and was given the Ed Block Courage Award in 2017 after playing through a thumb injury that required surgery.

The Browns had the chance to bring back all five starting offensive linemen from the unit that allowed a league-low five sacks over the final eight games. But Corbett was waiting in the wings.

Dorsey drafted Corbett with the first pick of the second round. He played left tackle at Nevada, and Dorsey liked him so much he took him knowing a switch to guard was possible.

Corbett saw extremely limited action as a rookie. He started one game as an extra lineman, was inactive for three with a foot injury and inactive for two as a coach’s decision. He should benefit by being surrounded by veteran starters in left tackle Greg Robinson, left guard Joel Bitonio, center JC Tretter and right tackle Chris Hubbard.

The Browns placed an original-round tender (fifth round) on receiver Rashard Higgins, a restricted free agent. He’s allowed to negotiate with other teams, and if he reaches a deal, the Browns have the right to match. If they decline, they would receive a fifth-round pick as compensation.

The Browns didn’t tender defensive back Briean Boddy-Calhoun, a restricted free agent. He will be free to sign with anyone Wednesday.