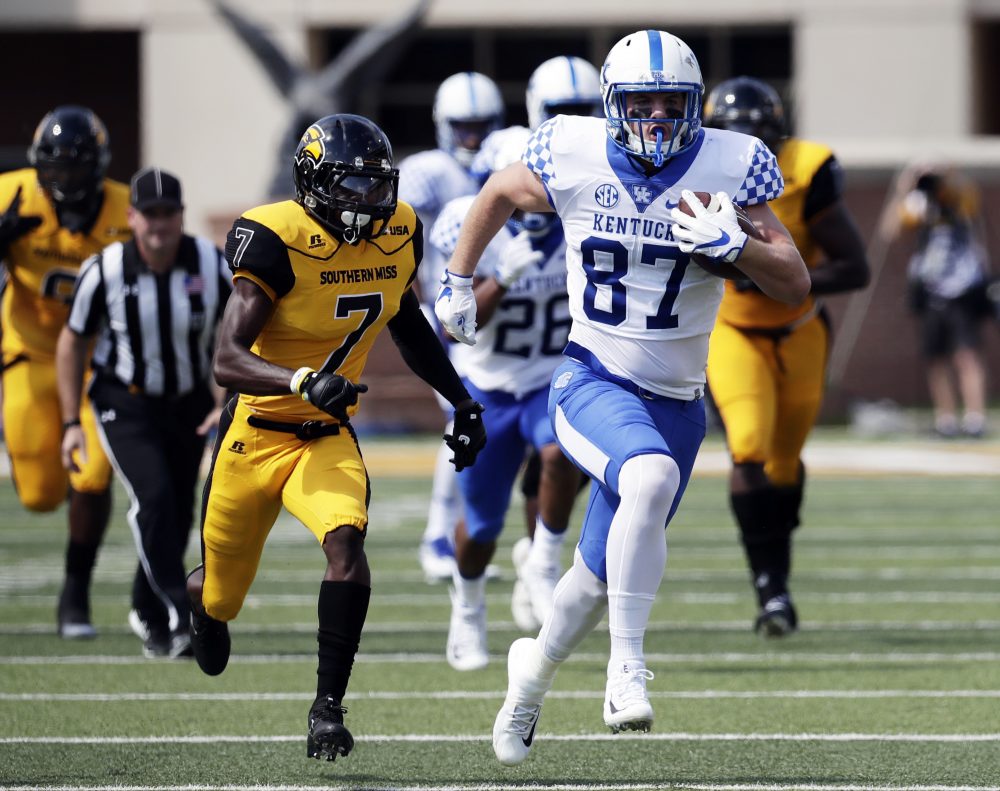 C.J. Conrad’s range of emotions over the last three weeks stretched wider than his arms reaching to haul in a wayward throw. Shock, anger, disappointment and fear were the original points on the compass.

Conrad was cleared to pursue his dream of playing tight end in the NFL.

“My prayers have been answered!” he tweeted. “I’m back!”

Doctors at the NFL scouting combine in Indianapolis last month detected a potential heart issue during extensive tests and wouldn’t let Conrad work out for general managers, coaches and scouts. The concern was so serious Conrad was told not to train until a final diagnosis despite feeling great the entire time.

“They were able to rule out what put me in danger zone, for a lack of a better term,” Conrad, who played for the University of Kentucky, said Tuesday night by phone. “I do have something. But it’s nothing that will keep me from playing football. It’s something that many athletes have.”

He declined to reveal his condition or the one discarded.

Conrad (6-foot-4½, 249 pounds) was in the best shape of his life when he arrived at the combine, ready to impress and move up draft boards across the league. Then came three days of tests, a crushing ruling and more than two weeks of waiting and wondering.

“Oh, I mean, there’s no doubt — it did scare me,” he said. “But I’m just such a competitive person, such a guy that I was just so optimistic through the whole process that I was going to eventually get cleared, even though maybe my parents thought differently because they’re just being parents and they cared and they’re scared.”

Conrad said the thumbs-up from Baggish confirmed his belief.

“I went and saw the best and I got cleared by the best and that’s why I don’t have any fear in my mind,” he said.

Disappointment for father and son after Conrad sent home from combine

He worked out for the first time in nearly three weeks Tuesday and won’t be ready for the Kentucky pro day Friday. That’s two missed chances to perform in front of NFL talent evaluators, although Friday he’ll talk to teams and hand out the medical clearance forms.

Conrad will play catch-up by holding a personal workout April 8 in Lexington along with teammate Mike Edwards, a safety recovering from a broken thumb. He’s confident a good number of teams will attend and he’ll be back to normal.

“I fully expect to be right where I need to be by April 8, no problem,” he said.

While it was agonizing for Conrad to watch the tight end workouts on TV after he left Indianapolis, the combine wasn’t a complete loss. He met with the tight ends coaches of all 32 NFL teams.

“And it went really well. Really well,” he said. “That was the best part of the combine for me.”

The strong impression was only partial because he wasn’t allowed to step foot on the field.

“They were really looking forward to watching me work out,” Conrad said. “That was probably the most disappointing thing was how well I did in my interviews, for them not to be able to see me work out really bothered me.”

The NFL teams have watched his game film — 80 catches for 1,015 yards and 12 touchdowns in four years — but the gaping hole in the profile is the predraft workout that includes the 40-yard dash, vertical jump, agility drills, route running and pass catching.

“I know the type of football player I am and not being able to show that has been probably the toughest thing of this whole thing,” Conrad said. “You have no idea my excitement for April 8.”

Without the medical red flag, the No. 1 question among teams would be about his athleticism. Does he have the physical tools to complement his strong hands, blocking ability and intelligence?

“I didn’t get to show a ton of that at Kentucky,” said Conrad, who stayed busy the last couple of weeks by helping coach the Wildcats during spring ball. “But that excites me because I know the type of athlete I am and I know the type of time I would’ve ran if I would’ve been able to run at the combine. And it would’ve been good. So I know what I need to do now for April 8 and I’ve got all the confidence in the world that I’ll be just fine.”

He wouldn’t offer a specific prediction for his 40 time.

“It’s going to be above average for tight ends,” he said. “It’ll answer that question of my athleticism.”

Conrad said he can’t help but check out mock drafts but has been trying to avoid them since the combine.

“I know things have changed,” he said.

He acknowledges the heart issue will hurt his draft stock. Last year Michigan defensive tackle Maurice Hurst went through something similar and slid from a potential first-round pick to the fifth round.

Before the combine Conrad was considered a midround pick.

“There’s so much there that upsets me. But the same time, when I got the news yesterday that I was cleared, that didn’t even really cross my mind,” he said. “I’m just so happy that I’m going to be given the opportunity to play football again. I know the type of football player I am and I understand all the draft stock thing, I cannot look at it that way. When the draft day rolls around if I get my name called or not, I’m still going to get an opportunity and that’s all I need.”