Baker Mayfield out to show rookie season wasn’t a fluke, and driven to work harder after acquisition of Odell Beckham Jr. 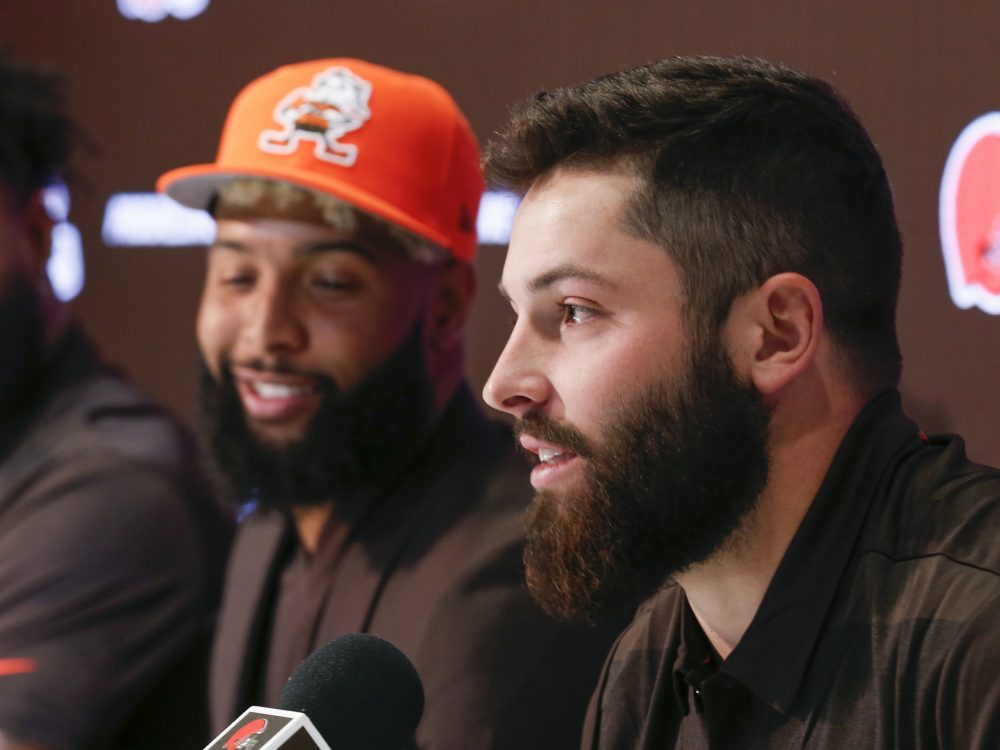 BEREA — Baker Mayfield only had to look a couple of feet to the right to realize how much had changed for him during the three months away from Browns headquarters.

The trade for three-time Pro Bowl receiver Odell Beckham Jr. made Mayfield’s job more fun and exciting. It also cranked up the pressure.

Mayfield is good with that.

“The more talent I have around me it’s going to make my job a lot easier, but that means I have to work that much harder for it,” he said Monday at the start of the offseason program as he sat next to Beckham behind the dais.

The Browns are the NFL’s hot team right now, with oddsmakers installing them as the favorite to win the AFC North. Mayfield said the organization must set expectations internally but acknowledged the acquisition of Beckham from the Giants raised the bar in his mind.

“Absolutely. And my expectations were changing drastically,” he said. “I’m absolutely not satisfied with how last year ended by any means.”

He wasn’t just talking about the 7-8-1 finish that had fans buzzing after 1-31 the previous two years. He wants to accomplish more than the NFL rookie-record 27 touchdown passes that accompanied 3,725 yards, a franchise rookie record and sixth among NFL rookies all time.

“Then you start to realize what jump you want to make from Year 1 to Year 2,” he said. “For me, it’s really important for people to realize that it’s not just a fluke season. This is real and I want to improve.

“I’m not satisfied with setting one record. I want to win Super Bowls. I want to do a lot more. That’s why you combine that with guys like these guys (Beckham and receiver Jarvis Landry) who talk about legacy and leaving something behind that they can be proud of and look back on. That’s about setting your own expectations. So, yeah, they keep increasing.”

New coach Freddie Kitchens instructed Mayfield to take a break from football after the season. Mayfield had been going almost nonstop since his Heisman Trophy-winning senior season at Oklahoma.

“He has been chomping at the bit to get back,” Kitchens said. “The good thing about getting away from the game is that you kind of have a renewed eagerness to get back when you do that.

“I think he falls into that. We hit the ground running today with him, and we will see where he is at.”

Mayfield developed a friendship with Beckham last offseason and they worked out together in Los Angeles.

“We feel like we’ve talked about being here and then it’s here,” Beckham said. “So it’s just hard for me to put into words being here today, but I’m just thankful for the opportunity.”

“The thing we kept saying is this can’t be real,” Mayfield said of their phone conversation after the trade.

Mayfield said he screamed like he was on the field for gameday when he heard about the blockbuster.

“It’s knowing exactly who he is and knowing what type of guy he is,” Mayfield said. “His play and his ability speaks for itself with him, but the things that we talked about all throughout last year of what we need, the types of guys we need in this locker room to go in the right direction, that’s the best thing about that. He’s a team guy and he’s going to be a great presence for us in this locker room.”

Mayfield and Beckham met through Giants receiver Sterling Shepard, a teammate of Mayfield’s at Oklahoma. They hit it off right away.

“Dancing together,” Beckham said. “Now I’ve got somebody who’s going to show me up dancing, so I’ve got to get my moves right.”

Beckham arrives with the reputation of being a diva but also as an extremely hard worker.

“Oh, he’ll get a run for his money on the competitive work ethic nature,” Mayfield said. “But that’s the type of guy we’re getting. That’s why I say it’s great for the locker room and the impact that he can have with who he is as a person speaks much more than anything that he will ever do on the field. That’s why it’s such a big deal to us and that’s why we’re all excited and pumped up.”

Beckham is the headliner in an offseason that also brought defensive end Olivier Vernon and defensive tackle Sheldon Richardson, and leaves the Browns dealing with plenty of expectations from the outside.

“Something that needs to be set forth for our team mindset-wise is everybody’s going to say that we could be and should be Super Bowl contenders,” Mayfield said. “Yeah, we know that. Every person that plays in the NFL should believe that, but I have always firmly believed you set your own expectations. Nobody else really matters.”