Mailbag: Will Kareem Hunt become the No. 1 RB? Is the salary cap becoming a concern? Over or under 8.5 wins? 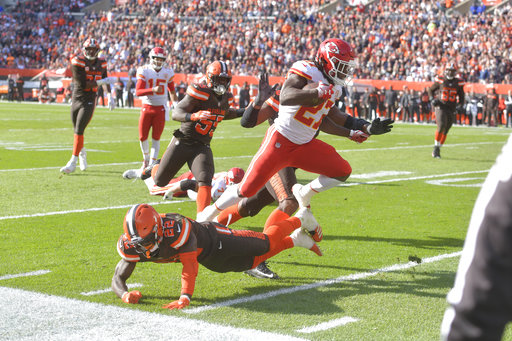 Q: Do you think Kareem Hunt might take over the No. 1 running back spot by the end of the year? Or do you see it as more of a committee approach?

A: Committee. The Browns made a commitment to Nick Chubb by taking him with the No. 33 pick last year, and he earned their trust with a strong rookie year. He will be the starter in 2019, I think even after Hunt is eligible.

But Hunt is immensely talented, versatile and led the league in rushing as a rookie in 2017, so if he avoids trouble off the field in 2019, he could start 2020 as the No. 1 back.


Q: In the need to re-sign our own free agents and possibly sign free agents in 2020, how much of a concern is our cap space going into 2020? I love what GM John Dorsey has done, but I am afraid that the rumor to why he was chased away from KC will transfer over to Cleveland with the salary cap issues.

A: I get where you’re coming from but think it’s too early to start worrying about the cap.

The Browns have about $30 million in remaining space, and Dorsey has already said he’ll be careful over the rest of the offseason when he considers adding veterans — although he did sign strong safety Morgan Burnett to a two-year deal reportedly with nearly $4 million guaranteed.

The days of free spending will come to an end sooner rather than later. That includes tough decisions on which players to extend, starting with free safety Damarious Randall and middle linebacker Joe Schobert. But Dorsey still has the flexibility he needs to add talent, and will for the next couple of years.

Q: What’s most likely: Mississippi State defensive tackle Jeffery Simmons falls enough to trade up for, Browns get a WR in second or third round, or GM John Dorsey makes no trades until the third round?

A: Given those choices, I’ll say Simmons.

Receiver isn’t a priority after trading for Odell Beckham. The Browns liked their young receivers before last season, so I don’t think they feel the need to draft anyone early.

And I can’t imagine the wheeling-and-dealing Dorsey standing pat until the third round.

So that leaves Simmons. Dorsey continues to praise him and downplay his issues — repeatedly punching a woman during a fight in high school and a torn anterior cruciate ligament that will likely sideline him for his rookie season — so if there’s a way for Dorsey to draft him, I believe he will do all he can to make it happen.

Q: Defensive end Emmanuel Ogbah’s pact is very affordable and he’s a good dude. Shouldn’t they be retaining him for depth insurance?

A: You asked before he was traded Monday. So, sorry.

I’m not going to argue with your premise. But it’s almost inevitable when a starter loses his job to a new addition to the roster — Olivier Vernon in this case — that the player is sent packing. The team obviously doesn’t think Ogbah’s good enough, and he knows that. Plus the Browns believe they have depth at end in Genard Avery, Chad Thomas and Chris Smith.

All of the above doesn’t mean the Browns should’ve traded Ogbah, or got good value. They got a player John Dorsey knows well, safety Eric Murray, but he’s more of a depth addition and special teamer. While Ogbah was a disappointment last year, he’s still a legitimate starter in the league.

A: I can’t believe I’m saying this, but give me the over.

I expected 8.5 to be the over/under since last year’s 7-8-1 finish and I thought under was the wise pick. Then John Dorsey traded for receiver Odell Beckham Jr. and defensive end Olivier Vernon and signed free agent defensive tackle Sheldon Richardson. I expect the over/under to climb to 9.5 by the start of the season. That’s a tougher call.

There’s no guaranteed the Browns will jump to nine wins after the huge leap from 0-16 to 7-8-1, but as the favorite to win the AFC North they’ll need at least nine wins. So give me the over.

And congrats on your new gig.

Q: What big changes might we expect from the new special teams coach?

Those are the obvious goals for Mike Priefer, who took over for Amos Jones, who was in over his head. The Browns had one of the league’s worst special teams last year, so I’d expect a huge upgrade.

That should come through greater discipline and attention to detail. The roster is also more talented and deeper, which benefits special teams.

Q: Who is the better owner, Jimmy Haslam or Randy Lerner?

A: Their styles couldn’t be more different. Lerner hated the spotlight and stayed out of the way of his football people. Haslam is front and center and has been often criticized for taking too active a role in the football decisions.

Despite the contrast, it was a dead heat for a long time. But Haslam took the lead when he hired John Dorsey, who drafted Baker Mayfield. Lerner never found a stable GM, although Phil Savage had a brief run before imploding.

Dorsey and Mayfield need to continue on their trajectory. But if they do, Haslam will have the clear edge.

Mailbag: Does John Dorsey have another big trade up his sleeve? How many picks will Dorsey make? Is Clay Matthews a fit?
Mailbag: Any holes left in the starting lineup? When is help coming at LB? Extensions for Damarious Randall, Rashard Higgins?