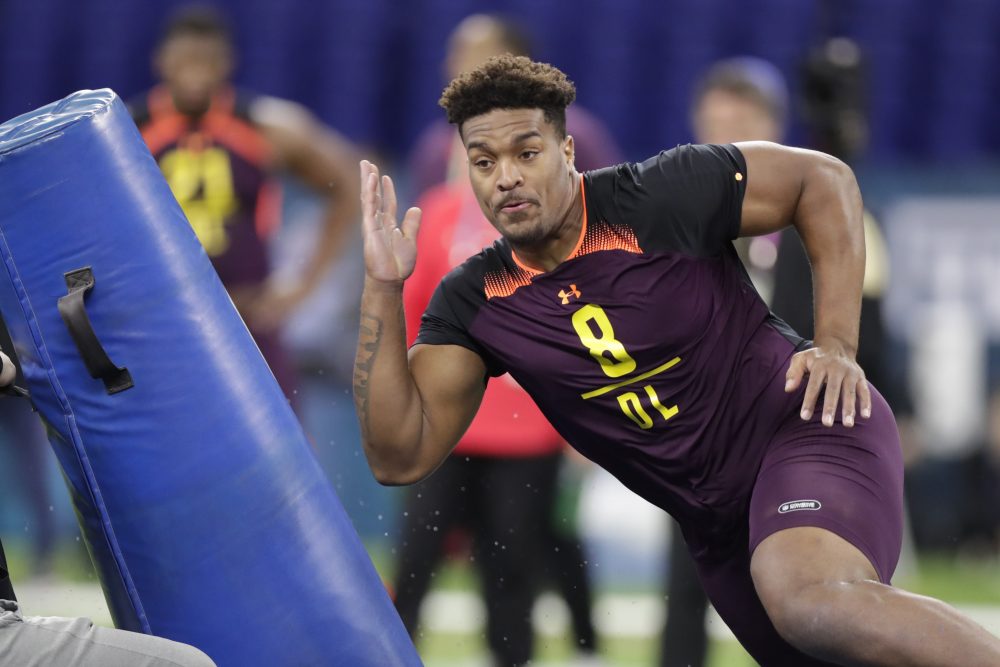 Not only is he a 6-foot-3, 281-pound defensive tackle with elite explosion and boxer’s hands, he lights up when the Drug Enforcement Administration is mentioned.

Jones, a graduate of St. Ignatius and Ohio State, interned with the DEA in New Hampshire last year.

“He was really excited about doing it,” Ohio State defensive line coach Larry Johnson told The Chronicle-Telegram by phone. “It really turned him on to see a way he can help people. That’s Dre’Mont Jones. He wants to make a difference.

“He came back, he was glowing, the fact that he had an opportunity to do that in a special way.”

Jones got connected with the DEA because OSU coach Ryan Day’s brother works for a national law enforcement agency.

“That was really fun,” Jones said at the scouting combine. “Just seeing everyday life of what they do, how they handle dangerous situations and how they prep for things, it’s just almost like football.”

The serious side of Jones is evident in more than his choice of internships. He earned Academic All-Big Ten honors and a degree in sociology with a 3.45 GPA and was detailed in his preparation for Saturdays.

But coaches and teammates also describe someone with a lot of personality.

“He’s goofy, he’s energetic, he’s a fun guy to be around,” said Tracy Sprinkle, an Elyria High graduate who played with Jones and mentored him at Ohio State.

The ability to adapt on the field was crucial to Jones being on the verge of getting drafted into the NFL, possibly in the first round. He headed from Cleveland to Columbus as an end but made the move to tackle after sitting out his freshman year with a torn ACL suffered playing basketball as a senior at St. Ignatius.

He’s slightly undersized for the brutal interior but is the playmaker college and NFL coaches desire in a sport increasingly reliant on passing. The most effective way to bother a quarterback is inside pressure, and Jones brings it.

“He can change direction really fast,” Johnson said. “That’s the thing he does really well, is really attack the line of scrimmage. So when it’s a pass he’s already at full speed, he doesn’t have to restart his feet.”

As a redshirt junior in 2018, Jones had 43 tackles, 13 for loss, 8.5 sacks, an interception and three fumble recoveries. He agreed at the scouting combine with teammate Nick Bosa, the defensive end likely to be the No. 2 pick, that he’s the best pass-rushing tackle in a stacked draft class.

“It’s really uncanny and I do it at a high level every game,” Jones said.

He wanted to attend the draft in Nashville, Tenn., but isn’t on the NFL’s list. If he doesn’t go in the first round April 25, it’s because general managers are worried about his ability to take on double teams and stop the run.

“There’s definitely no question that I can play the run,” Jones said. “I wouldn’t be playing, I wouldn’t be starting. It’s not like I gave up big plays.”

He put on 25 pounds since the Ohio State coaches decided on the move to tackle. Johnson believes he can add 10 or 15 more but wants him to stop there.

Johnson doesn’t want the quickness and athleticism — developed on the basketball court — compromised with too much weight gain.

“His get-off is unbelievable,” Sprinkle said. “His get-off, his quick twitch, he has great hands, and his effort is still there.

“Sometimes when you become that player that you always wanted to be, your effort might slip, but his effort still hasn’t slipped, he’s still running down screens, running down the same way he did when he first got there. So he’s going to have a great career in the NFL.”

Jones was forced into the starting lineup as a redshirt freshman when Sprinkle suffered a torn patellar tendon in the 2016 opener. Sprinkle took Jones under his wing and watched him soar.

The athleticism, keyed by special hips and feet, was on display against TCU last season when he sliced into the backfield and intercepted a shovel pass. He stiff-armed the quarterback, broke a tackle and cut back inside to complete the touchdown return.

He started to develop his handwork under veteran assistant coach Dan Corrigan at Ignatius and Johnson helped take it to another level after Jones decided to return for the 2018 season. He had just one sack in his first two years and was projected as a midround pick.

“The thing that really stood out is that he realized he wasn’t ready yet,” Johnson said. “And he made a decision, which was a great decision for him, because now he gets to get everything he really wants. He’s in a great position right now. And he had a heckuva year.”

Jones graduated in December and, despite the advice of some to protect himself from injury, played in the Rose Bowl, coach Urban Meyer’s last game with the Buckeyes.

“I got a nice email from Urban that he really appreciated that Dre’Mont did that,” Kyle said. “And I hope that the NFL teams appreciate that. I hope they see that was a good statement by that kid.”

The Browns aren’t scheduled to draft until No. 49, which may be too late for Jones. But if he’s there, general manager John Dorsey could pounce and add him as the heir apparent to recently signed free agent Sheldon Richardson.

“He’s a Cleveland kid, there’s no doubt about it,” Kyle said. “I could see him getting really excited about that, a lot of energy with that.”