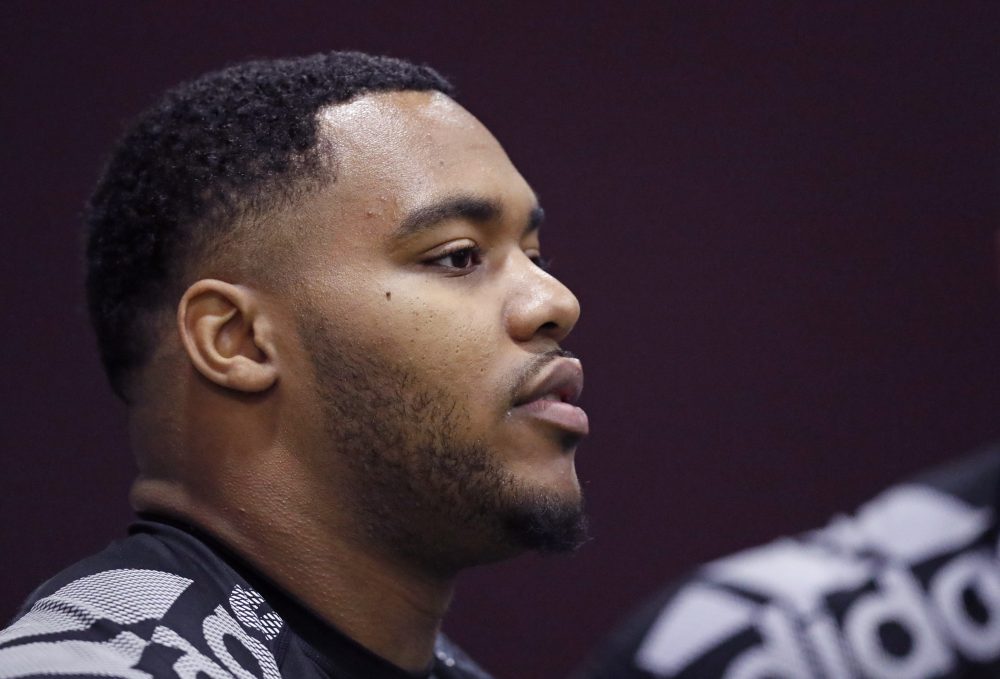 Tyrone Shorter’s phone has been blowing up with calls from NFL teams.

“They’re just trying to make sure they’re not drafting a monster,” Shorter told The Chronicle-Telegram by phone Monday.

He coached Mississippi State defensive tackle Jeffery Simmons at Noxubee County High School in Macon, Miss., and was one of the first people Simmons called after the incident that threatened to derail his life and follows him three years later.

A video captured Simmons repeatedly punching a woman as she lay on the ground while he was a senior in high school. He was found guilty of malicious mischief and pleaded no contest to a simple assault charge.

Brian Baker was Simmons’ defensive line coach for all three years at Mississippi State and helped develop him into a top-10 talent in the NFL Draft. He vouched for Simmons as a person and player — “This is one that I would definitely stand on a table for,” he said — and said his family, including college-age daughters, rave about Simmons after spending time with him.

But Baker admitted it’s tough to get past the video.

Shorter and Baker said they hadn’t heard from Browns general manager John Dorsey, but there’s no denying his interest. Dorsey used one of the team’s 30 pre-draft visits on Simmons (6-foot-4, 300 pounds) and has repeatedly defended him when questioned about his character.

“What you should do is you should talk to the coaches and the support system at Starkville, Mississippi State, and just see what kind of man that guy really is,” Dorsey told reporters at the league meetings last month. “We’re still doing our research with regards to some other stuff, but I know on the film when you watch (Simmons) play the game of football, he’s a really good football player — really good.”

Mississippi State was criticized for not revoking Simmons’ scholarship and suspending him for only one game to start his career. He seized the opportunity and refused to be defined by one day in his past.

He was an All-American on the field, and a two-time member of the SEC Academic Honor Roll. He was a team leader in community service, visiting schools to give kids motivational support before testing.

“He said, ‘Coach, you’ll never have to worry about me again.’ And he was a thousand percent correct,” said Baker, who coached outside linebackers for the Browns in 2013. “The incident was atypical, not a real representation of who he is.”

The video is startling, as a giant man pummels a woman on the ground. But those who know Simmons best believe context is important.

Shorter said Simmons’ mom and sister were in a fight with the woman on the video when Simmons arrived on the scene.

“I’d never seen that anger in him at all. Ever,” Shorter said.

“He said he doesn’t apologize for defending his family but he does apologize for doing it that way,” said Baker, who’s now at Alabama. “And you could see it on his face, it was a regrettable thing that happened.”

Baker said Simmons had no off-field issues once arriving in Starkville.

“None. Period,” he said. “What he’s done has proved to me he’s going to be an asset to any community, particularly one like (Cleveland) where they covet their athletes.

“I always said of all the places I’ve been, Cleveland deserves a champion. I really believe that because of the people. The organization’s been jacked up. But the people, from barbershop to barbershop, I used to go to a cigar bar out there in Avon, and to hear those guys talk, good people, man, good people.”

Baker raves about Simmons’ strength, comparing it to that of former Browns defensive tackle Ahtyba Rubin, and his competitive nature. NFL Network draft analyst Daniel Jeremiah ranked Simmons as high as No. 5 in his ratings, citing his athleticism and explosion.

The video will likely hurt his draft stock. So will a torn ACL suffered during a workout in February that is expected to sideline him for his entire rookie year.

Dorsey, a big believer in second chances, signed defensive tackle Sheldon Richardson to a three-year, $37 million free agent deal in March and could afford to wait a year on Simmons if he’s willing to give up what it takes to move into the bottom of the first round — assuming Simmons is still available. The Browns’ trade package would likely have to include their top pick — No. 49 — a second-round pick in 2020 and either frustrated running back Duke Johnson or another draft pick.

“Seeing a kid with his skill set and understanding his intangibles, if I’m John Dorsey, I would be excited, too.”

Shorter said Simmons’ dedication was obvious in high school. He stated his goal of becoming a five-star recruit and achieved it, often getting in a second workout by himself after the team’s morning summer practice.

“His work ethic has always been unbelievable,” Shorter said.

Baker believes he’s most devastating lined up over the center, using power and speed moves to get to the quarterback.

“I’m not exaggerating, not even in the least, he would beat offensive linemen into submission,” Baker said. “This dude is different now, and I’ve been around a lot of guys.”

The questions about the video will resurface in whatever NFL city he lands. He’s used to them.

“I thought he handled everything in a mature way,” Shorter said. “He faced the criticism. He looked it square in the face and he didn’t run from it.”

Simmons wrote the Bulldogs fans a letter when he announced he was leaving for the NFL.

“Not everyone gets a second chance, but I am so grateful I did,” he wrote. “Thank you God.”