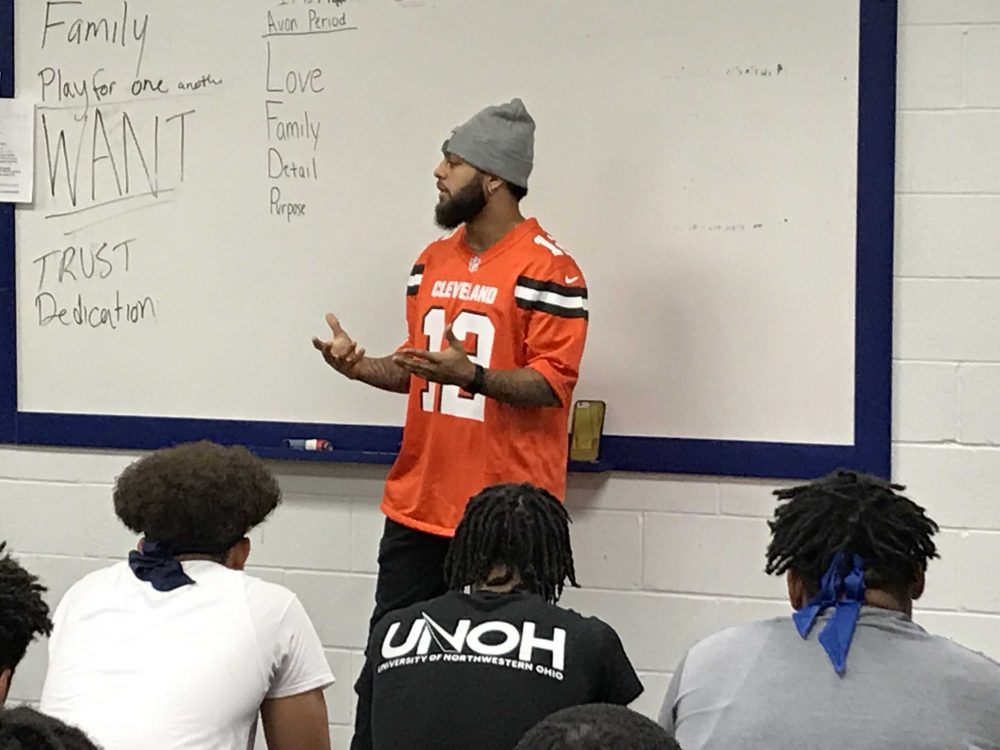 LORAIN — The cramped weight room next to George Daniel Field had been transformed into a conference room.

And the speaker had everyone’s attention.

As Browns receiver Blake Jackson talked in his orange No. 12 jersey, about 40 Lorain football players watched and listened, many leaning forward not to miss a word.

Jackson’s visit Wednesday was part of Titans coach Dave McFarland’s weekly Men of Character Meetings. He’s trying to instill reliability in his players, so they gather at a set time to talk and listen. The topic isn’t always football as he tries to bring in as many adult male role models as possible.

Jackson connected with the players through his speech and by staying until the end of the weight-lifting session that followed.

Jackson was a quarterback at Division III Mary Hardin-Baylor in Texas and won a national championship. He made the switch to receiver after college and spent much of last year on the Browns practice squad before being promoted to the active roster in the final week.

He stressed making good decisions, setting goals and becoming leaders. He made sure the players knew the importance of school, telling a story about flunking Spanish as a freshman in high school and not being allowed to play spring football.

“Go to college and when you get there, the No. 1 thing you can do is to get the education, he said. “That degree will last you forever.”

Harley, who dropped to do pushups after a quick interview, transferred from tiny Newbury High School in Geauga County and asked Jackson about the transition to playing at a much higher level of competition.

“Everybody wants to be the best,” Jackson said. “You’ve got to play your own game to become the best.”

Harley took it to heart.

“I’ve been getting into my head recently, but Coach Mac has actually been getting me to get my mental state right,” Harley said. “So that’s why his answer, that’s actually really going to help me play my own game, don’t try to play nobody else’s game.”

Jackson said he looks forward to learning from new Browns receiver Odell Beckham Jr. as he tries to earn a roster spot on what has become a talent-rich offense. He doesn’t skip training days and demanded an uncompromising work ethic.

“Don’t ever stop,” he said. “That’s what separates you from everybody else.”

He finished with a heartfelt message about his chosen profession.

“I’m telling you all, if any one of you all in here is doing it for the wrong reasons, you will be exposed,” he said. “If you’re not doing it for the true love of the game, I recommend you look into something else. Because it’s a great game, it teaches you so much more than any other game could offer.”

NFL Draft: Former coaches vouch for Mississippi State DT Jeffery Simmons despite ugly incident from past
Tim Couch looks back at the night he was the NFL Draft’s No. 1 pick