GM John Dorsey says for the right player, he’d give up what it takes to move into 1st round 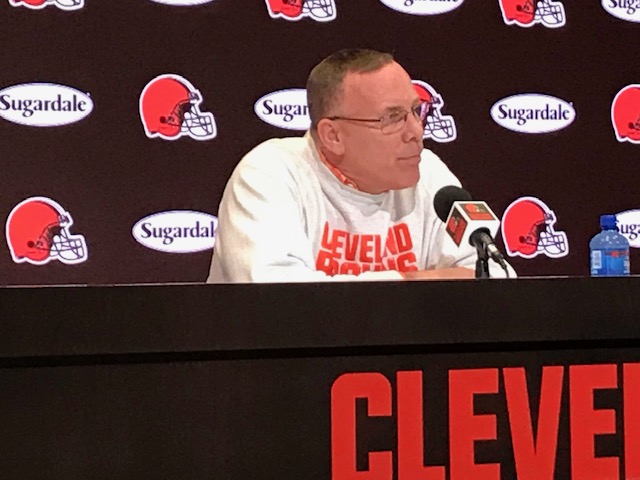 BEREA — John Dorsey has crunched the numbers on what it would cost to trade into the first round of the NFL Draft.

He’s willing to pay the price.

“If a certain player is there that I deem that the value fits the player, yes,” the Browns general manager said Thursday.

Dorsey sent his first-round pick, No. 17, to the Giants in the March for receiver Odell Beckham Jr. The draft begins next Thursday, and much of Dorsey’s pre-draft news conference was spent on the possibility he could move back into the first round. The Browns’ first pick is in the second round Friday, No. 49.

He has a list of players he’d try to trade up for if they were still available near the bottom of the first round. A highly regarded cornerback would make sense, but Mississippi State defensive tackle Jeffery Simmons looks like the name to watch.

Simmons is considered a top-10 talent but suffered a torn ACL in February and will likely miss his rookie season.

“He’s a phenomenal football player and unfortunately he had an ACL injury recently,” Dorsey said. “If he was there at 49, you may think about it, but you have to see what’s best for the organization.”

Dorsey was being coy. Simmons is unlikely to be around in the second round, much less No. 49. Contracts for first-round picks carry a fifth-year team option, which is always attractive and especially so given he isn’t expected to play in 2019.

“There’s an advantage to that,” Dorsey said. “Let’s make no mistake. Anytime you can get a fifth-year option with a good player, that always helps out.”

The personnel staff will begin to examine the potential trade scenarios Monday and take three days to play out the plethora of permutations for the first round.

Dorsey, in his second draft with the Browns, will call possible trade partners in the days leading up to the draft to lay the groundwork for a deal.

The last of the Raiders’ three first-round picks is No. 27, so they could be a team willing to trade down. According to draft charts, the Browns would need to give up No. 49, a second-rounder in 2020 and maybe something else — perhaps a midround pick or running back Duke Johnson, who’s asked for a trade — to move up the 22 spots.

The Patriots, at No. 32, could also work. Bill Belichick has traded down 24 times during drafts, according to USA Today.

“The compensation on the backend can’t be outrageous. It has to work on both sides,” Dorsey said.

The Browns have drafted in the first round every year since 2008, when GM Phil Savage had traded the first-rounder for the right to pick quarterback Brady Quinn the year before. The streak may end next week, but Dorsey has made 17 trades in 16 months with the Browns, so a draft-day shocker can’t be ruled out.

He said he’ll take input from chief strategy officer Paul DePodesta and the analytics department in his preparation.

“When you make a decision it helps to have as much information as you possibly can,” Dorsey said. “It is important to talk about scenarios and how they may unfold, but once you get into the moment of that draft it moves very quickly so you better be ready to make those decisions very quickly and hopefully you’ve worked out all the scenarios that could possibly come up.”

Simmons has another red flag the Browns must consider. He was caught on video in high school repeatedly punching a woman on the ground. He said he was defending his mom and sister but apologized, and people at Mississippi State rave about him.

Dorsey has defended Simmons throughout the draft process and recently hosted him on a visit.

Ready for prime time? Popular Browns scheduled for four night games, including Week 2 at Jets and Week 3 vs. Rams
Odell Beckham Jr. repeats he’s glad to be with Browns, responds to criticism from Giants fans in Twitter “therapy session”