Mailbag: Any holes left in the starting lineup? When is help coming at LB? Extensions for Damarious Randall, Rashard Higgins? 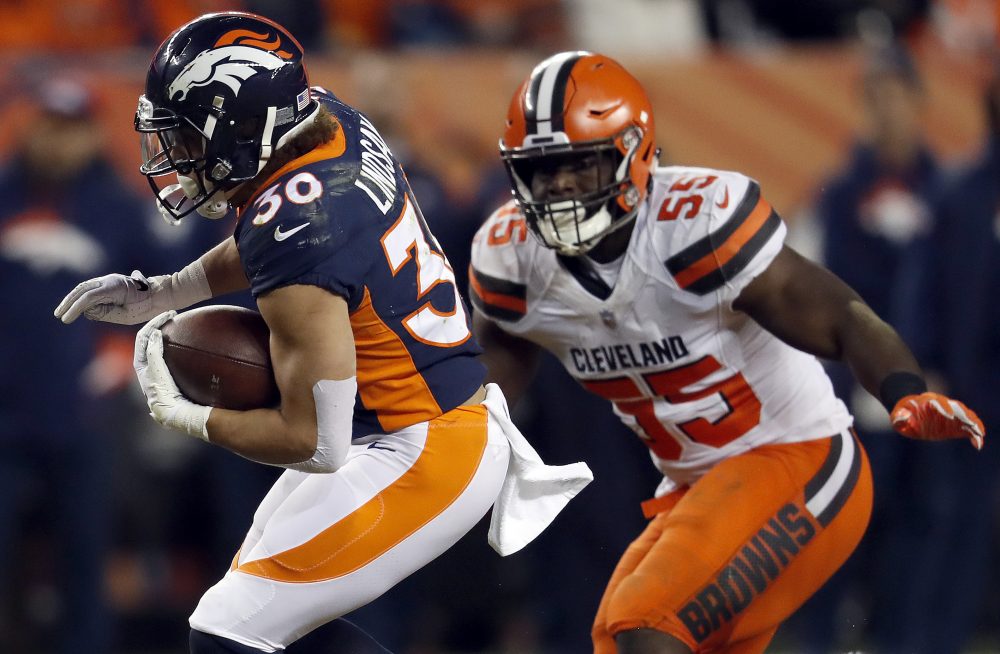 Q: Would you agree that all 22 starting positions on offense and defense are locked in? If not, who could you see losing a starting spot to a draft pick or current backup?

General manager John Dorsey has Genard Avery penciled in as the starting strongside linebacker in his second year, but it seems far from guaranteed. Avery was good as a rookie, but his primary role was as a pass rusher on the line. He needs to show he can handle life in space.


Adarius Taylor was signed as a free agent after starting 10 games last year with the Buccaneers and could challenge Avery. I also expect Dorsey to add at least one linebacker in the draft. The final option is a late free agent signing, similar to Mychal Kendricks last year.

I could also see a rookie cornerback, especially one taken at No. 49, leap past Terrance Mitchell and TJ Carrie on the depth chart. And while I don’t expect it to happen, the starting spots of right guard Austin Corbett and right tackle Chris Hubbard could be vulnerable. Dorsey added insurance, and options, on the line in free agency.

Q:
When will we get depth at LB? I’m shocked we haven’t gone after one in free agency since the draft is thin and any quality is likely out of our reach at 49.

A: Your concern is valid. Joe Schobert and Christian Kirksey are the only returning starters, and neither has proved to be a big-time playmaker. As mentioned above, Genard Avery is next in line and has potential.

Perhaps Dorsey likes someone in the draft whom everyone is overlooking. I also think it’s critical to remember the importance of linebackers has been reduced in many of today’s defensive alignments. With the increase of nickel and dime packages, there’s only room for one or two linebackers on the field.

With that being said, I still expect Dorsey to draft one and possibly sign another in free agency.

Q: The strength of this year’s draft is undoubtedly the defensive side of the ball. What about next year? Do you see general manager John Dorsey possibly jettisoning a pick this year to garner a round higher pick next year, a la Joe Banner? Is next year’s class worth that type of maneuver?

A: Teams are always looking ahead but it’s tough to tell for sure the strength of future draft classes, especially with the number of underclassmen who leave school early. I think it’s more likely Dorsey trades up this year in the quest for a player or two he covets, especially without a first-round pick.

Finally, I also believe the offense is in good shape for the present and future, with the possible exception of the line, depending on the play of left tackle Greg Robinson and right guard Austin Corbett this season.

A: I thought Randall’s deal would be done by now, so I’m starting to wonder if it’s in the Browns’ plans. With the quick accumulation of young talent, GM John Dorsey will have to decide which players to give long-term extensions. Randall and middle linebacker Joe Schobert will be the first test cases.

Having said that, there’s still plenty of time to extend Randall. He played at a near Pro Bowl level last year despite battling injuries much of the season. He also has great versatility, moving to corner to cover Pro Bowl Tampa Bay receiver Mike Evans. The draft could tell us what the future holds for Randall. If Dorsey takes a free safety in the second or third round, Randall’s days are numbered. If not, an extension could come before training camp.

As for Higgins, the Browns should be in no rush. He recently signed his fifth-round tender as a restricted free agent to return in 2019. That secures him a spot in training camp but not on the regular-season roster. Higgins was productive last year with 39 catches for 572 yards and four touchdowns but is limited physically and may need a good preseason to stick around.

Q: NFL teams in the past have worn throwback uniforms, but the Browns never have. Does the NFL still allow those? Imagine the applause if the Browns ran out of the tunnel in their 1964 uniforms?! (Instead of the hideous current uniforms.) The color rush uniforms are cool, too.

A: Teams are allowed one alternative uniform per season, and the Browns have gone with the all-brown color rush. I’m not a uniform expert but think the reason could be that the difference between the 1964 uniforms and those of the previous couple of decades — before the disaster of the latest change — wasn’t that significant.

Q: What QB has Baker Mayfield’s style that we might draft late to develop as a backup?

A: Washington State’s Gardner Minshew is considered a late-round pick and has similar size and leadership traits as Mayfield but not the arm strength. Penn State’s Trace McSorley is also an undersized playmaker who could be added as an undrafted free agent.

While I get the premise of your question, I would argue that Mayfield’s style isn’t unique. He’s effective making plays outside the pocket, but what makes him special is his ability to win from the pocket despite his lack of ideal height. So I think the most important thing for the developmental quarterback is the ability to process information and throw accurately from the pocket.

Mailbag: Will Kareem Hunt become the No. 1 RB? Is the salary cap becoming a concern? Over or under 8.5 wins?
Mailbag: Which veteran is in danger of losing starting job? Too much exposure for Baker Mayfield? Will Duke Johnson be here Week 1?