NFL Draft: Freddie Kitchens applauds talent and toughness of defense-dominated class but warns against getting overconfident 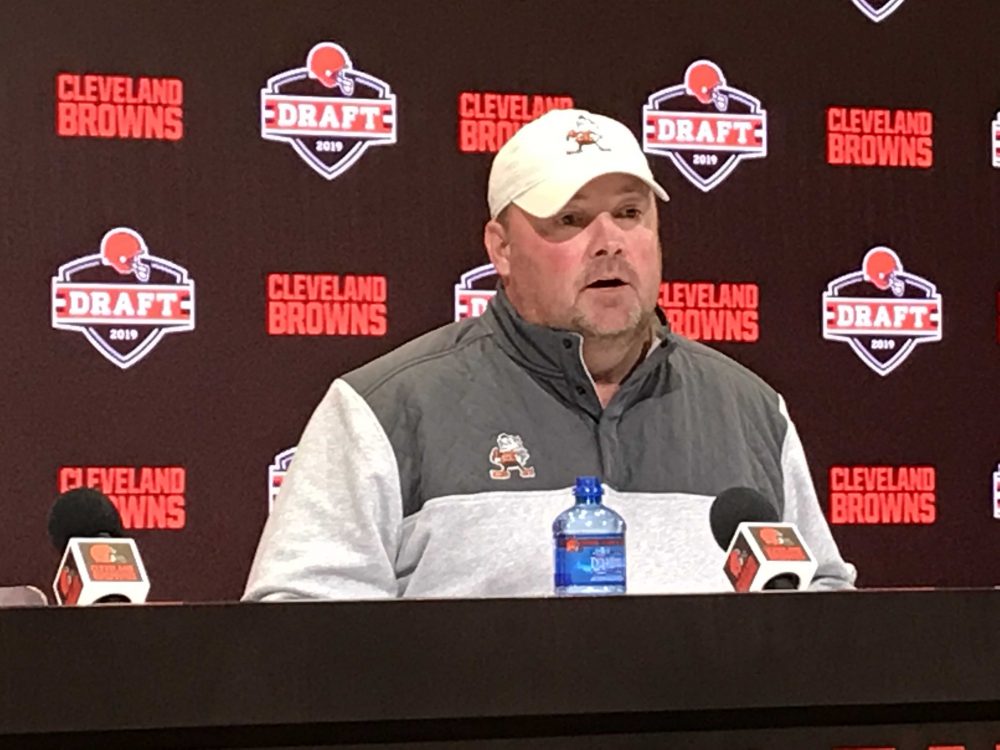 BEREA — The Browns opened and closed the NFL Draft with cornerbacks.

Five of their seven picks were on defense.

They added speed and toughness to a talented roster seemingly poised to make a playoff run.

To the fans, and a couple of the draft picks, the Browns took the next step toward the Super Bowl.

New coach Freddie Kitchens loves his new players and believes his team got better, but he’s grown weary of the hype that’s been raging this offseason and kicked into another gear when the Browns traded for receiver Odell Beckham Jr. last month.

“This time of year, everybody wants to talk about the roster and wants to crown somebody,” he said Saturday as the three-day marathon concluded. “All of this is good, but this is not going to win us any games. This is not even going to win us a quarter. It is not going to do anything for us but set us up for failure if we don’t have our head on straight and we are ready to play football, because the games are going to be won and lost in September.

“All of this other stuff is fluff. It is just things for people to talk about in April and May. You are going to have a different narrative come September, and that is when we want to control the narrative, not in April or May.”

The team’s first four picks addressed a lack of depth on defense. LSU cornerback Greedy Williams was first at No. 46 in the second round, followed by BYU linebacker Sione Takitaki in the third, (No. 80) Miami safety Sheldrick Redwine in the fourth (119) and Alabama linebacker Mack Wilson in the fifth (155).

The first comments by Williams and Wilson included mentions of the Super Bowl.

“We will get them right when they get here,” Kitchens said. “We don’t want to talk about it. We want to do our talking on how we prepare and how we work.”

Cleveland’s final pick was Tulane cornerback Donnie Lewis Jr. After not doing much at cornerback or linebacker in free agency, the Browns took care of that in the draft with two apiece.

General manager John Dorsey had a reason for his plan of attack. The personnel staff knew the draft class was stocked on defense.

“Usually historically, two-thirds of the draft is offensive personnel and a third is defensive personnel, but for some reason this year, it kind of flipped,” director of college scouting Steve Malin said. “We are sitting back and we are looking at the draft, the free agency and making decisions of where the resources need to be allocated.”

Williams brings more speed at corner following the selection of Denzel Ward last year at No. 4. Dorsey and Kitchens can envision them on opposite sides of the field for the next five or 10 years.

The Browns also wanted more speed at linebacker for new coordinator Steve Wilks’ scheme, which requires athleticism at all three spots. Takitaki and Wilson provide that element, and it will be interesting to see how playing time is divided among returning starters Joe Schobert and Christian Kirksey, Genard Avery in Year 2 and the rookies.

Defense is about more than being able to run. There’s plenty of hitting involved, which the Browns didn’t ignore with Takitaki, Wilson and Redwine.

“It is a tough game played by tough people,” Kitchens said. “You want guys that love the game of football, and I think we have helped ourselves in that area.”

Oklahoma kicker Austin Seibert and Southeast Missouri State offensive lineman Drew Forbes prevented a clean sweep by the defense. Even the kicker has some brute to him, weighing 211 pounds.

“I haven’t seen a kicker as competitive as he is,” scout Josh Cox said.

“It is a DNA,” he said. “Plain and simple, you are just looking for guys that love the game, that are passionate about the game. That is the ingredients for success.”

Wilson expected to be taken in the first or second round. After sliding into the fifth, he said the 31 teams that passed are going to “have to feel all the pain” he built up over the long weekend.

He’ll be the first to tell you the Browns still have plenty to prove.