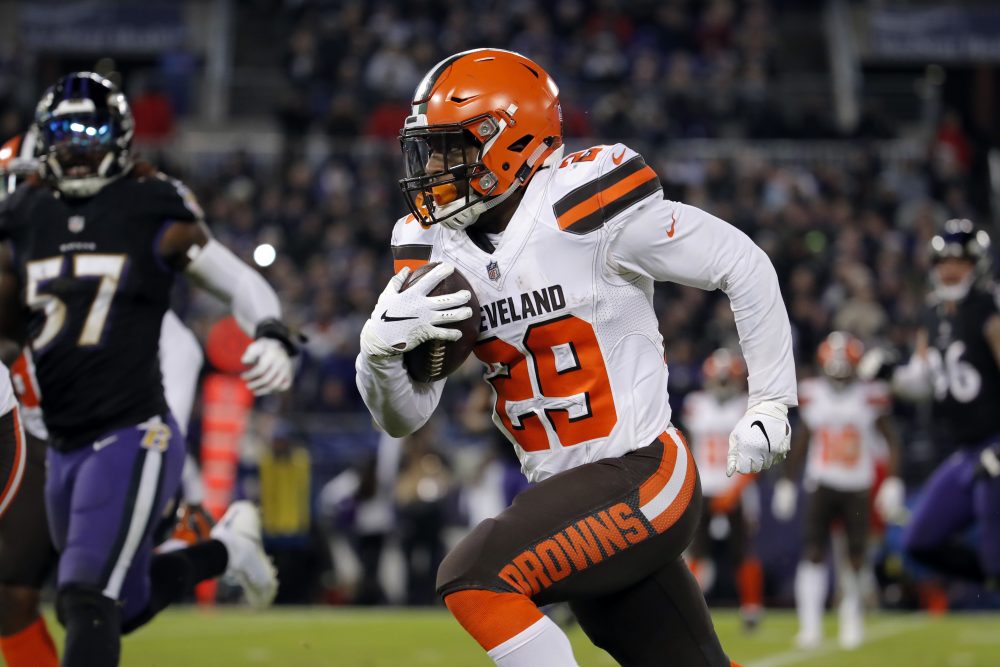 BEREA — Running back Duke Johnson doesn’t want to play for the Browns anymore, but the team has no intention of granting his request and trading him.

Cleveland coach Freddie Kitchens adamantly defended the decision not to deal Johnson in his final news conference during the three-day NFL Draft, which wrapped up Saturday.

“His opinions and his demands and stuff like that, I’m not impacted by that one bit.”

Johnson is beginning a three-year, $15.6 million contract extension presented to him by general manager John Dorsey last June. He will count $3.05 million toward Cleveland’s salary cap in 2019, whether he is on the roster or not.

The Miami (Florida) product was supplanted on the depth chart by rookie Nick Chubb last season, then slid down another spot when former Chiefs star Kareem Hunt was signed in February. Hunt was subsequently suspended by the NFL for eight games.

Johnson, who was a third-round pick by the Browns four years ago, blossomed into a multipurpose threat out of the backfield in 2017 with 1,041 yards from scrimmage, 74 receptions and seven touchdowns.

The 5-foot-9, 210-pounder largely became an afterthought once Chubb took over as the starter, establishing career lows with 201 rushing yards and 47 catches under deposed offensive coordinator Todd Haley and Kitchens.

Despite Johnson’s significant drop-off, Dorsey referred to him as “a vital part of this offense” during his pre-draft media availability. His coach echoed those comments.

“Duke Johnson will have a vital role on this football team and Duke Johnson will help us win football games,” Kitchens said. “Am I surprised that he’s still here? No, not one bit. I haven’t wavered and never said anything different other than that.

The leading scorer in NCAA FBS history has joined the Browns. Oklahoma kicker Austin Seibert, whose 499 points and 310 extra points are records, was picked in the fifth round with the No. 170 selection.

The 5-9, 213-pounder broke the mark of 494 held by Arizona State’s Zane Gonzalez, who was Cleveland’s seventh-round pick in 2017 and flamed out after a little more than one season.

Seibert also punted for the Sooners all four seasons, but Browns scout Josh Cox said they only foresee him doing so in the NFL “in emergency situations.”

“It’s really amazing how good Austin has been at field goals, kickoffs and punts throughout his career,” Oklahoma coach Lincoln Riley said. “He’s been very, very valuable because of his unique skill set and I’m excited to follow him at the next level.”

** The Browns added punter Jamie Gillan of Arkansas Pine Bluff as an undrafted free agent, according to NFL Network. Nicknamed the “Scottish Hammer,” the rugby veteran worked out in Berea earlier in the month.

Alabama linebacker Mack Wilson admittedly didn’t know much about Ohio or the Browns before being picked in the fifth round at No. 155.

“I know that’s where LeBron James is from,” he said. “He is obviously a legend in Ohio.”

Wilson was well aware, though, of how many NFL franchises passed on drafting him. The 6-1, 240-pounder said he believes he was the best linebacker available and expected to be drafted no lower than the third round.

“There were 31 teams that slipped up on me, and somebody is going to have to feel all the pain I had built up these past few days,” Wilson said. “That chip is going to always be on my shoulder.”

Southeast Missouri State left tackle Drew Forbes, who was chosen in the sixth round at No. 189, isn’t a lock to stay at the spot at the next level.

The 6-4, 308-pounder has the ability to play guard or center, if needed, according to Browns scout Colton Chapple.

“He is athletic enough to play left tackle, but he has the athleticism to kick inside if we see fit,” he said. “That is a better question for (offensive line coach James Campen), just to see how to get the best five linemen out there. He does have that intelligence where he can play multiple positions.”

Cleveland still owns all seven of its picks in the 2020 draft, along with a sixth-rounder from Arizona (trade for cornerback Jamar Taylor) and a seventh-rounder from Buffalo (trade for wide receiver Corey Coleman).

** The Browns snapped up defensive players with their top four selections for the first time since 2013. Their draft breakdown was five defenders, one offensive player and one specialist.

Quote of the day

“We rank those guys just like we rank everybody else. He was sitting on the board and we decided to go get him. Hell, there was what, three or four kickers taken before him?” — Kitchens, responding to criticism over the drafting of kicker Austin Seibert.