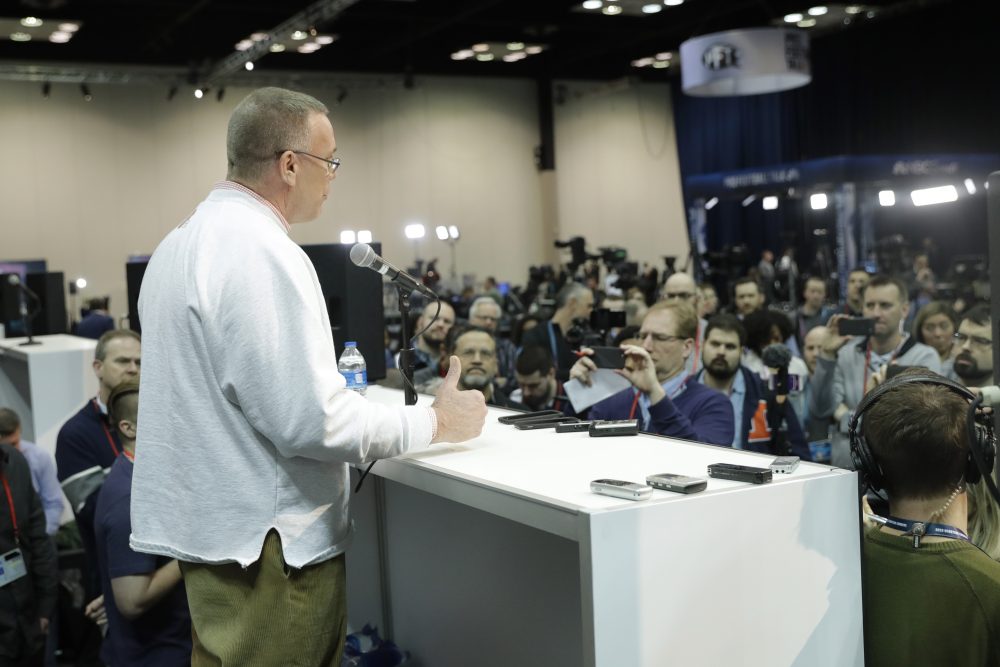 For a change, the Browns aren’t the talk of the NFL in the days following the draft.

For better or worse — usually much worse — the Browns have dominated the discussion preceding and following recent drafts. The spotlight came with 10 first-round picks in the previous five drafts, including two spent on Heisman Trophy-winning quarterbacks.

The Browns didn’t pick in the first round.

After 17 trades in his nearly 17 months on the job, general manager John Dorsey made just one deal in the three days, surrendering a fifth-round pick to bump up three spots in the middle of the second round to ensure he got LSU cornerback Greedy Williams.

He didn’t take a quarterback, receiver, running back or pass rusher, ignoring the game’s sexiest positions.

This was a much different draft for Dorsey than his first in Cleveland a year ago, when he took quarterback Baker Mayfield at No. 1, cornerback Denzel Ward at No. 4 and running back Nick Chubb at No. 35. This weekend was about adding depth at specific positions.

Here are five takeaways from a busy, if unspectacular, weekend.

Dorsey loves speed at cornerback. He needed size on the outside.

Dorsey showed restraint by not trading into the first round when the asking price was too high. He finally pulled off the small move from No. 49 to No. 46 when he couldn’t believe Williams was still on the board.

Dorsey said he expected Williams to go in the first five picks of Day 2 after teams looked at who was left after the first round Thursday night. Instead, five corners went before Dorsey pounced on Williams.

At 6-foot-2 with 4.37 speed and good ball skills, Williams has the attributes desired in a corner. The knock is an unwillingness to help in run support — coach Freddie Kitchens told him he’d have to tackle “a little bit” in their phone call Friday — but that ranks down the list of requirements at the position.

Dorsey said he expects a second-round pick to start as a rookie, so it’s fair to assume the plan for the next several years is to pair Ward and Williams.

“Oh, my God. Me and Denzel, we are going to tear up the league,” Williams said.

Linebacker Christian Kirksey couldn’t help but notice the Browns added to his position group. He was in Nashville, Tenn., on Saturday to announce Cleveland’s third-round pick, and BYU linebacker Sione Takitaki was the name on the card.

Dorsey doubled down on linebacker in the fifth round with Alabama’s Mack Wilson, who was projected as a potential second-round pick.

Kirksey and fellow starter Joe Schobert are likely safe for this season, but their long-term futures are in doubt. Dorsey inherited them — and Kirksey’s contract — then drafted three linebackers in two years, including promising fifth-rounder Genard Avery last year.

Schobert is in the final year of his rookie deal, and the Browns can get out of Kirksey’s four-year, $38 million deal following this season. So their performances in 2019 will go a long way in determining the future of the position.

I know it’s unpopular to criticize anything Dorsey does these days — and I fully realize he’s done an outstanding job remaking the roster — but I don’t agree with drafting a kicker, especially as early as the fifth round. I’d rather add depth along the defensive line or find a promising young quarterback.

I understand competition is needed for incumbent Greg Joseph, but that could just as easily come from an undrafted rookie or a guy who’s bounced around the league for a couple of years. Yes, Sebastian Janikowski was a first-round pick, but Phil Dawson, Adam Vinatieri and Justin Tucker were undrafted.

My final issue with the pick is that using a draft choice on a kicker gives him an unfair edge in the preseason competition because a GM is more inclined to keep a pick.

Kitchens said he isn’t surprised running back Duke Johnson wasn’t traded during the draft. I am. He asked to be traded and the Browns are just using him to keep the No. 2 job warm until Kareem Hunt returns from an eight-game suspension to start the season.

But the Browns haven’t gotten an offer for Johnson they deem sufficient. And Kitchens was adamant Saturday that Johnson will have a “vital role” and it’s best for the team to keep him.

He’s correct about the second part, but I’d be concerned about the relationship between organization and player being damaged beyond repair. Johnson hasn’t attended the voluntary portion of the offseason program, and the test will be whether he shows up for the mandatory minicamp in June. His frustration began last season, so it might not be easy for him to get past his issues.

Don’t worry about the Browns taking a backseat to teams like the Cardinals, Raiders and Giants for the last week.

Cleveland will be back in the spotlight once the focus returns to the season.