Greedy Williams embraces falling into 2nd round of NFL Draft: My place was to be in The Land 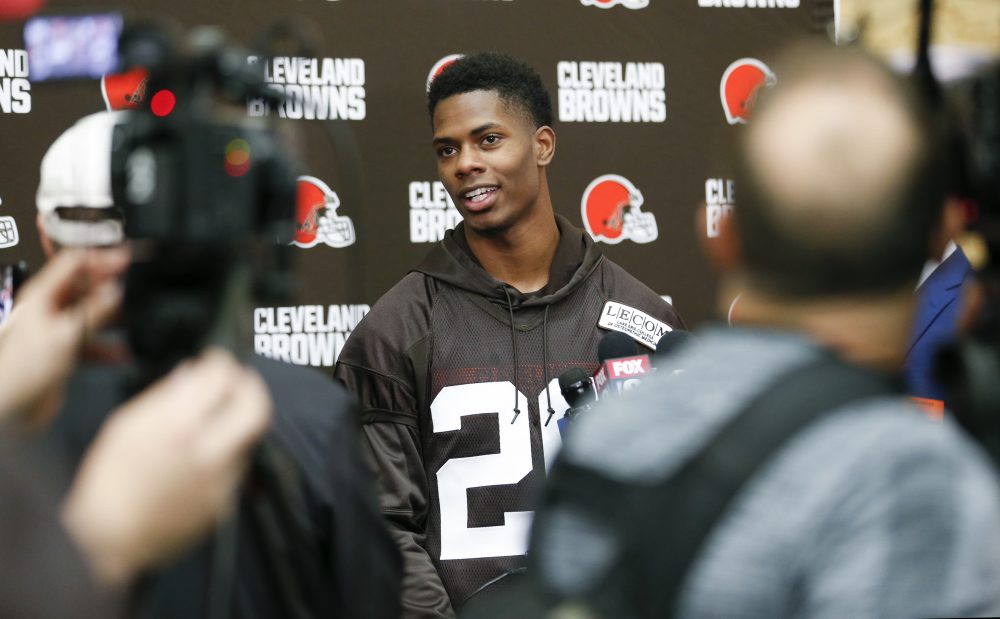 BEREA — Greedy Williams was already in Nashville, Tenn., for the NFL Draft when he asked the key question to linebacker Devin White, an LSU teammate and friend.

“I was like, ‘So everybody at the draft gets drafted, right?’” Williams said, referring to the first round. “He was like, ‘No, a couple people didn’t get drafted last year.’ So I’m like, ‘Oh, my God.’”

The first round passed April 25 without the long, speedy cornerback in a stylish red suit getting picked. Five of the 22 attendees weren’t selected the first night.


The Browns ended Williams’ wait the next night at pick No. 46 after trading up three spots.

“I feel like God’s got a place for everybody and my place wasn’t going in the first round,” he said Friday on the first day of rookie minicamp. “My place was to be in The Land and come build with a great team, great coaching staff and I’m just like happy to be here, ready to get to work with the vets and hopefully we’re going where we’re supposed to go.”

Williams took the entire draft process in stride but said it was “nerve-wracking” to his mom. He said he doesn’t regret the trip to Music City.

“I really went just to give my family the experience of the draft,” Williams said. “But after the first day, my name didn’t get called. I still had high energy, happy and told my mom, ‘Let’s just go back home and do it with my other family.’”

LSU cornerback Greedy Williams walks the red carpet April 25 in Nashville, Tenn., before the first round of the NFL Draft.
AP

They flew back to Shreveport, La., barely arriving before Day 2 of the draft started. They cut it so close Williams left his luggage at the airport.

He had about 150 family and friends at a Holiday Inn when the long-awaited call came from the Browns.

“It was probably one of the best experiences of my life,” he said.

The Browns didn’t have a first-round pick, so Williams (6-foot-2, 185 pounds, 4.37-second 40) was in the spotlight Friday. He was surrounded by reporters, microphones and cameras during an interview session, then took the practice field, where he seemed hesitant and gave up some completions as he played off coverage.

“He’s smooth. He transitions well from his backpedal and he can close on the ball,” coach Freddie Kitchens said of his first impression. “He’s long, of course, and then he competes.”

Kitchens had a message for Williams when he was drafted, telling him in a phone call he would have to tackle “a little bit” after the scouting reports knocked him in that area.

“I wasn’t joking. He’s going to have to tackle some,” Kitchens said Friday. “When the ball gets out on the edge, we’re not going to let them go.

“Greedy is going to tackle. He wants to tackle. He’s a willing tackler. That may not all have been on tape as an example, but peer pressure gets to him sometimes and it gets to our players. And if we have the leaders that I think we have, then he’ll tackle.”

Williams blamed his lack of tackles in the second half of the 2018 season on being in tight man-to-man coverage on the opponent’s best receiver — rather than the theory he avoided injury risk before entering the draft — and said improving won’t be a problem.

“I’m more than just getting somebody down. I like tackling, hitting, whatever they need me to do, and I’m here to do it,” he said.

Kitchens and general manager John Dorsey delivered a second message when Williams showed up for minicamp: Cut down on the Super Bowl predictions.

Williams was fired up when the Browns picked him and mentioned going to the Super Bowl three times in his first interview last week. He included a win in one of the quotes.

“I like the confidence. I like the excitement and the passion that he has,” Kitchens said, calling him “a really good kid.” “But I think that mantra kind of changed today, right? We’re not in the prediction business, like I told you guys.”

“They told me just come in, study, work hard, get the trust of my teammates, and once I get on that roll, everybody will fall in and hopefully we will be one of those Super Bowl-caliber teams,” he said.

Williams said Browns headquarters “felt like home” as soon as he entered. He knows receivers Odell Beckham Jr. and Jarvis Landry from their LSU connection and has struck up a friendship with cornerback Denzel Ward, the No. 4 pick last year.

They talked before the combine and on draft night.

“He called me, it was excitement and was like, ‘You’re here and I’m ready to take you up under my wing and try and put you in the best position to be a starter,’” Williams said, adding they played “Fortnite” the next night. “And we’ve been bonding since.”

Williams said after the draft he and Ward would “tear up the league,” but has realized he has some work to do first as he tries to earn a starting spot over veterans Terrance Mitchell and TJ Carrie.

“Coming in, studying the playbook, getting the playbook down pat, starting to meet my new teammates, get the trust of those guys, some of the vets,” he said. “It’s in my hands and how I take advantage of this opportunity.

“Opportunity is all I need. My chances are where I take them.”

While Williams brushed off the disappointment in Nashville, he acknowledged being the seventh cornerback selected will serve as motivation — and a reminder he got lucky.

“It’s definitely a chip on the shoulder,” he said. “It’s all a blessing. God put me in a perfect spot. I couldn’t imagine being nowhere else.”