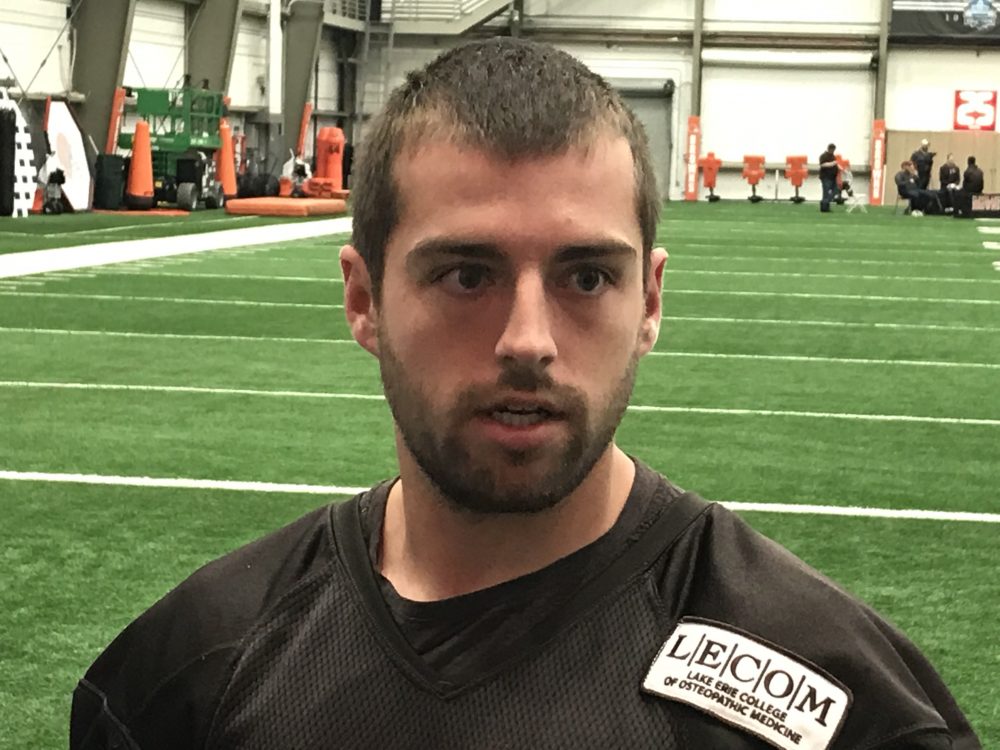 He also punted at Oklahoma, was the backup quarterback in high school in St. Louis and isn’t afraid to sacrifice his body to make a tackle.

“I got my bell rung a couple times at Oklahoma,” he said Friday at the start of rookie minicamp. “I’m not going to go for the ankles. It’s easier to go heads-up and make sure he gets hit then going for the ankles — he might jump over you. I’m not worried about getting hit.”

The Browns drafted Seibert in the fifth round last weekend, and scout Josh Cox said in addition to a strong leg, Seibert’s the most competitive kicker he’d been around. Seibert credited quarterback Baker Mayfield after spending three years together at Oklahoma.

“I love to compete. I’m a football player who kicks, in my head,” he said. “I think I got a lot of that moxie and competitiveness from Baker, just being around him.

“Learning how he carries himself on the field, I want to do that, too. I want my teammates to believe in me, I want to earn their respect and I want to go out there and compete and do my best to win football games.”

Seibert (5-foot-9, 211 pounds) said he followed the Browns last year because of Mayfield, who famously described himself as not a “cookie-cutter quarterback” after criticizing former coach Hue Jackson.

“He had a big support staff in our locker room and we always watched the Browns game,” Seibert said. “They’ve still got them on on the TVs in there, they’ll replay them throughout the week.

“I was just ready to get up here because I know Baker’s got huge influence up here and it’s an awesome opportunity and a spot to play.”

Seibert will need that fire in his battle with incumbent Greg Joseph. General manager John Dorsey has promised a competition for the job.

Seibert’s face lit up when asked about Mayfield planting the Oklahoma flag at midfield of Ohio Stadium after a win over the Buckeyes.

“It was awesome, going up there, playing in front of 110,000, whatever it was,” he said. “I won’t forget that game. It was awesome, just two blue bloods and we ended up winning that one, they got us the year before, it was incredible.”

The Browns added an undersized quarterback and a strong-legged punter among 15 undrafted rookies signed before the start of rookie minicamp.

David Blough (6-0, 200 pounds) played in 44 games at Purdue and ranks as the fourth-leading passer in school history with 9,734 yards. He completed 871 passes for 69 touchdowns.

Jamie Gillan, nicknamed The Scottish Hammer, punted and kicked at Arkansas-Pine Bluff. The Scotland native moved to the U.S. as a teenager and is expected to compete at punter with incumbent Britton Colquitt.

The Browns also signed a pair of Ohio kids in 6-3, 213-pound receiver Dorian Baker (Kentucky/Cleveland Heights High School) and 6-0, 217-pound running back Darrin Hall (Pittsburgh/Austintown Fitch). Hall rushed for 2,189 yards and 21 touchdowns in his career at Pitt, averaging a school-record 7.48 yards a carry in 2018.

“Actually I was looking at the comments when they posted a video and a lot of people (were) saying he looks like a younger Chris Rock,” Williams said. “So my response to that is, I tell people that’s my father.”

Cornerback Donnie Lewis Jr., a seventh-round pick out of Tulane, was the only draft pick who didn’t practice. He broke his left foot in the East-West Shrine Game in January and had surgery.

He spent practice on the sideline but was engaged, helping players line up for drills and reacting to plays.

“I’m out here getting mental reps and in the playbook,” Lewis said. “This is the time where I’m getting in my playbook so when the time does come I can be ready to jump on it.”

The Browns expect him to be ready for training camp.

“John Dorsey got fired by Kansas City,” Cowherd said during his latest Browns rant on FS1. “Baker Mayfield was a walk-on twice and Cleveland’s been the laughingstock of the league. They’re all peas in a pod. They work together.”

Linebacker Mack Wilson and Seibert, the team’s fifth-round picks, signed their rookie contracts. Williams and linebacker Sione Takitaki, the third-rounder, are the only of the seven draft picks left unsigned.

** Browns legends Jim Brown, Bernie Kosar, Webster Slaughter, Kevin Mack and Earnest Byner talked at a dinner Thursday night, telling the rookies about what it’s like to play for the Browns and what the team means to the city.