Jamie Gillan, “The Scottish Hammer,” destroys footballs, spins a yarn and may challenge for punting job 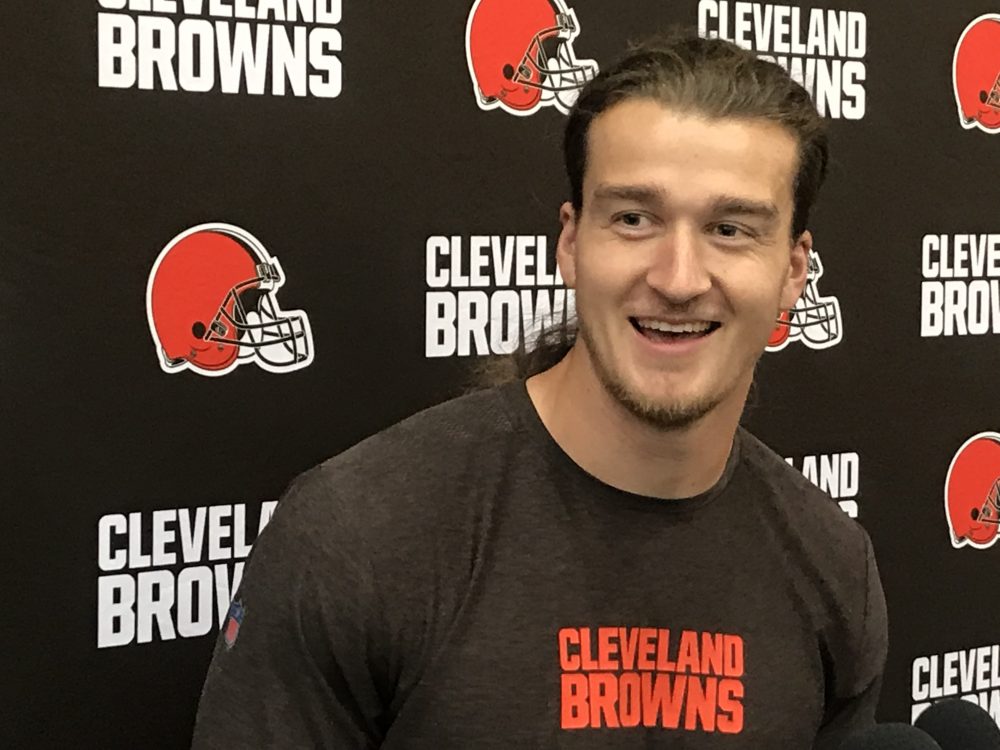 As he punted as hard as he could in the cold Arkansas mornings in January, the $100 NFL balls were leaking air. Not just one, but three out of the four he had purchased.

“I went out two days later, I was kicking them and I could hear the air coming out of them,” Gillan said Saturday at Browns rookie minicamp. “I was like, ‘Oh, man.’ So I treated the last one with a lot of care until the Browns sent me some footballs, which was awesome.”

The tale of busting balls with his brute strength grabbed the attention of NFL teams and furthered the legend of “The Scottish Hammer.”


Plus, the Browns and 49ers sent him replacements before a joint workout.

“It was like Christmas,” said Gillan, who was denied a refund when he tried to return the original balls. “I had 12 footballs, the most footballs I’ve ever had.”

Gillan was one of 15 undrafted rookies signed by the Browns on Friday. He didn’t kick this weekend as he deals with an injury, but special teams coordinator Mike Priefer took a special interest in him during the draft process and he may challenge incumbent Britton Colquitt once training camp arrives.

Gillan is more than a cool nickname. He has a great story to go along with his powerful left leg and long hair.

He was born in the Highlands of Scotland and raised in the land of kilts, haggis and bagpipes before coming to the U.S. just before he turned 17. His father is a member of the Royal Air Force stationed in Maryland and works in anti-submarine warfare.

“It looked a lot like Hogwarts,” he said of the boarding school he attended while his parents were already in the U.S. “I do miss Scotland a little bit, though.”

He was playing rugby and soccer at Leonardtown High School in Maryland — general manager John Dorsey’s hometown — when he made the transition to football after watching the kicker “hit the back of the offensive lineman” on an extra point.

“I went up to the coach after the game and I told him I had a rugby playing background, and I’ve been able to do torpedo punts since I was 8 years old,” Gillan said.

He tried out the next day, earned a spot on the team as the punter and kicker and was given the memorable nickname by the coach.

“I love it,” coach Freddie Kitchens said. “It beats me having to give him one.”

After kicking in a handful of high school games and a couple of all-star games, his tale took another turn. In search of a scholarship, his friend saw on Facebook that the University of Arkansas at Pine Bluff was looking for a kicker. After his information was sent to the school, Gillan got a call from the 870 area code.

“I’m not going to lie to you guys, I had not heard of the state of Arkansas in my life before they called,” he said.

A scholarship was offered, he found out it was a Division I school and accepted sight unseen to the historically black college.

“I showed up a couple days later, signed the papers and that was definitely a culture shock, but I didn’t care about that. I get to play football,” he said. “Free weight room. Free balls to kick. Free food, so I’m happy.”

On the plane south, he found Arkansas on a map.

“I saw Pine Bluff and said, ‘Oh, this looks like a decent place,’” said Gillan, who hasn’t been back to Scotland in four years.

He handled kicking and punting duties, earning All-SWAC in both during his career. He averaged 42.5 yards with 27 inside the 20-yard line on punts as a senior, after 43.7 and 17 inside the 20 as a junior. He believes he can be an emergency kicker after going 20-for-29 on field goals last season with a long of 47.

He studied physical education and kinesiology because he loves the weight room, and his original goal was to become a strength and conditioning coach and play professional rugby. He’s chasing the NFL dream now and said he’s made the full transition from rugby kicker to traditional punter.

“There’s not much difference, just to be more stationary,” he said. “I’ve always preferred doing the natural American style punt with just a little bit of a rugby flair to it.”

Colquitt has punted in the NFL for nine years and was voted a Pro Bowl alternate last season when he averaged 45.4 yards on 83 attempts with 32 inside the 20. Colquitt may not appreciate the competition, but Gillan is looking forward to their time together.

“I can’t wait. I did a lot of research on him before I came here,” Gillan said. “I watched a lot of his film. He’s such a great punter, great with technique and fundamentals. With him going into his 10th year, what better opportunity than to learn from someone like that?

“Hopefully he accepts me and we get to work together and accept we’re going to be competing for the spot, but I’m also trying to learn as well.”

Gillan credited good agents and a strong performance at a kicking combine for putting him on the NFL radar. He was still surprised he got a contract offer after the draft.

“I understand two months ago no one even knew my name,” he said.

The Scottish Hammer didn’t pop any footballs in his first weekend with the Browns but he nailed the interview.

Greedy Williams embraces falling into 2nd round of NFL Draft: My place was to be in The Land
Nick Saban helped give Freddie Kitchens his start and predicts he’ll do “great job” as head coach