Notes: Good or bad, Freddie Kitchens “not interested in revisiting last year at all” 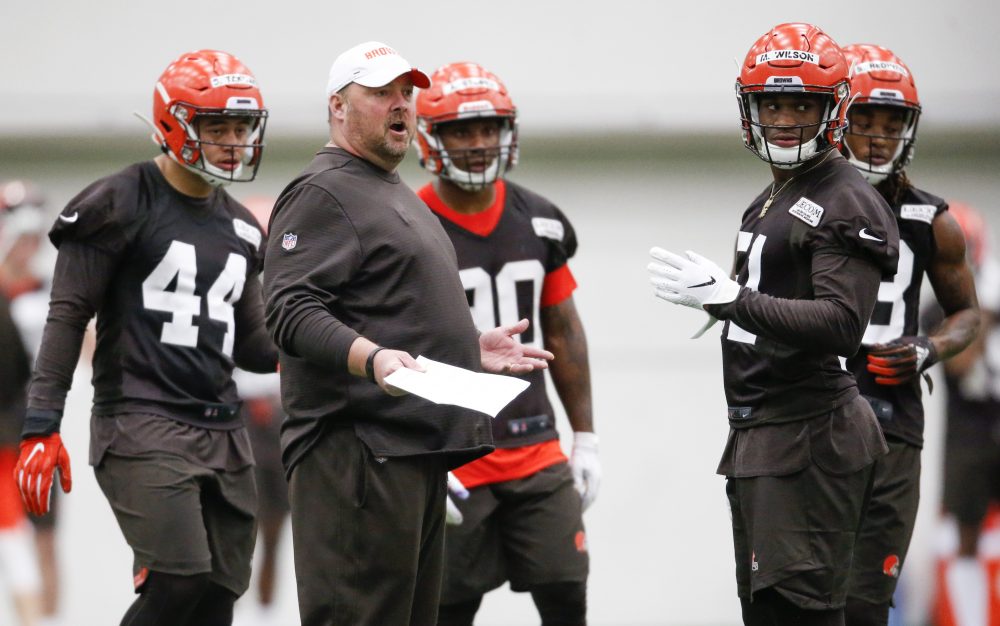 The answer from coach Freddie Kitchens wandered into a wide variety of topics.

“First and foremost, Gregg Williams was a good football coach. He has been a good football coach in the National Football League for a while, if that is the angle here,” Kitchens said Saturday during rookie minicamp. “As far as Myles is concerned, we need to get good at our craft in all areas. I think Myles will be the first to tell you that. We will give him every opportunity to master his craft, and therefore, we expect the production to go up. We expect the production to go up on the whole defensive line, the linebackers and the secondary. The production all over our football team needs to go up.”

“The negativity — I am not blaming anybody here — surrounding some of the aspects of the team last year, we were 7-8-1 so that may be justified, but moving forward, we are not worried one bit about last year on any area of last year offensively, defensively, special teams or anything,” he said. “We have a goal in mind of getting better in everything. Whether it is press-man coverage, whether it is Myles rushing or whether it is The Scottish Hammer (punter Jamie Gillan), everybody is getting better.

“Last year is last year. No two teams are the same. I have said that numerous times. You are not going to pick up where you left off. We are not interested in revisiting last year at all. We were 7-8-1. We didn’t do sh– last year. We didn’t win anything. We were third in the division. I don’t know where all of this is coming from. Just because the Super Bowl is our goal does not mean that is where we are right now.”

Garrett, the No. 1 pick in 2017, had 13.5 sacks last year and made the Pro Bowl. In a recent profile in Bleacher Report, he took a shot at Williams, who finished last season as the interim coach. He was replaced as coordinator by Steve Wilks.

“I hopefully have more freedom to be the player I want to be,” Garrett said. “Gregg was more like: ‘You win with these two moves. I don’t want to see anything else out of you.’ It’s kind of hard with two moves. I feel like you can’t always be so predictable.

ONE DAY AT A TIME

Cornerback Greedy Williams, the No. 46 pick out of LSU, had an interception and pass breakup Saturday but also allowed a deep touchdown.

“Greedy just needs to continue to get better just like everyone else,” Kitchens said. “This is their second day. They need to keep competing.

“Football is a game about one-on-one matchups in a team setting. Greedy needs to win his one-on-one matchups. When we are playing man coverage, the person doesn’t need to catch the ball on Greedy. If balls are getting caught on Greedy, just like Denzel (Ward), it needs to be zone coverage.”

Williams embraces fall into second round, says was meant to land in The Land

Kitchens didn’t want to jump to any conclusions about the draft class.

“I don’t really want to judge anybody off of two days without pads on, but none of them are going home right now,” he said. “You just don’t have enough information to gather.

“They look the part, they move around the part. They seem to be getting it. Sometimes it just needs to click with guys.”

Kicker Austin Seibert, a fifth-round pick out of Oklahoma, was 4-for-6 Saturday, missing from 33 and 35 yards. His long was 44.

Receiver Odell Beckham Jr. responded to the pick of Williams by screaming “Greedy” into the camera during an Instagram post last week.

“I know at LSU we always bond on brotherhood, so as me coming into the league, they welcomed me,” Williams said Friday. “We’ve got a welcoming call, NFLLSU, it’s like a fraternity. So with me joining this team, he was excited, Jarvis Landry was excited, so those guys are texting and calling me, letting me know like, ‘Hey, baby, you’re at The Land. You’re about to get to the best work and it’s up from here.’ So I’m just grateful to be a part of this team.”

Sixth-round pick Drew Forbes, who spent the first two practices at left tackle, was the only offensive lineman drafted by the Browns, yet Kitchens went out of his way to compliment the group.

“This is the best offensive line I have ever been a part of and I have been in the league 13 years,” he said, referring to rookie minicamps. “I have never seen a group collectively this good. We can actually function on offense, and sometimes in this kind of camp setting, that is hard to do.”

“Always. I’m from Cleveland. Doesn’t everybody grow up a Browns fan around here?” the Cleveland Heights product said.

Not exactly. Especially after mostly dismal results for the past two decades.

He started 34 games at Kentucky, with 101 catches, 1,148 yards and six touchdowns in his career. He went undrafted and signed with the Browns on Friday.

“I was hoping it was possible. It was always in my mind to go to the Cleveland Browns,” he said. “I would love to play for them and be a Dawg.”

Quarterback Baker Mayfield gave the “Riders up” call before the Kentucky Derby.

** The Browns could have a new kicker, punter and returners this season, and Kitchens guaranteed improvement on special teams over a disastrous 2018.

“We will be better on special teams,” he said. “I promise you that.”

** Minicamp concludes Sunday with a third practice. Afterward, the Browns could sign a couple of players from the 34 tryouts invited to camp.