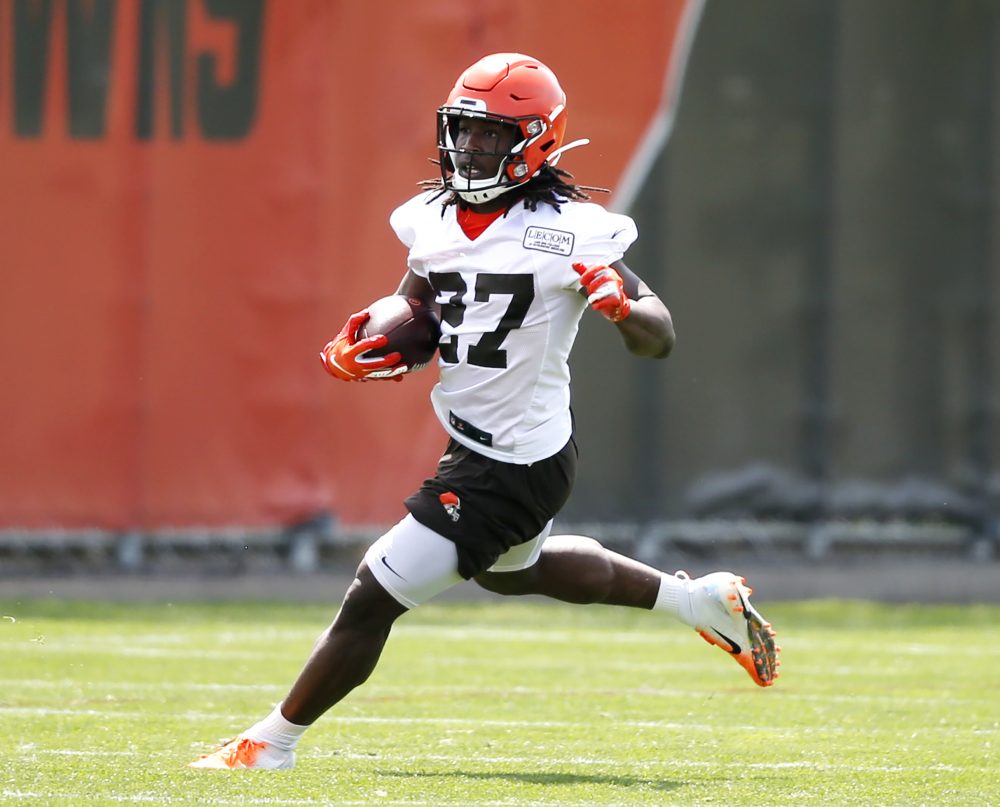 BEREA — Kareem Hunt said he didn’t watch the video of him shoving and kicking a woman in a hallway at The 9 for a “long, long time.”

When he did, he was shocked.

Hunt spoke to reporters for the first time since signing with the hometown Browns on Feb. 11. He apologized again for the February 2018 incident that got him cut by the Chiefs on Nov. 30 after he had lied about it, said that’s not a true representative of his character and vowed to earn the trust of the Browns by making better decisions.


“I’m definitely not going to make those same mistakes,” the running back said after an organized team activities practice.

Hunt, 23, will be suspended by the NFL for the first eight games of the season for the incident at The 9 in downtown Cleveland and an altercation at Put-in-Bay in June. The Browns knew a suspension was likely when they signed him, but general manager John Dorsey drafted Hunt in the third round in 2017 with the Chiefs and believes in second chances.

“I told him, ‘You can trust me,’” Hunt said. “I’ve got to earn his trust, and I’ve got to earn everybody’s trust in the whole organization. I’m not willing to mess that up.”

Asked to explain how the incident at The 9 happened, Hunt said he’s “trying to move forward” but acknowledged he disappointed a lot of people.

“It feels like you let everybody down. I felt that and I definitely don’t want to go back to that place again,” he said.

He said he’s taking the opportunity provided by the Browns “very seriously.”

“Day by day I’m just making the best decisions at the time and place,” he said. “And doing everything I can to prevent something like that from happening again.”

Hunt tried to say the right things in the 18-minute interview but acknowledged his words don’t prove anything.

“Only way is my actions,” he said. “I’ve got to earn people’s trust back and my actions are going to show.”

Hunt, who spent part of his childhood in Elyria before moving to the East Side and attending Willoughby South High School, said he’s going to counseling twice a week, has shrunk his circle of friends and isn’t going out as much. He’s also spent the last couple of months speaking to high school students across Northeast Ohio.

“Just telling them you gotta make smart decisions,” he said. “Just think before you act pretty much. When your emotions get high, just don’t react off your emotions and think about the long run.”

The organizational decision to sign Hunt seemed even riskier given his background in Northeast Ohio.

Many family members have spent time in jail, including his father, Kareem, an Elyria resident who was arrested in Elyria in January on drug charges. And the two incidents that drew the league suspension came in the area.

“Definitely not,” he said. “I’m making my own decisions, so I’m not going by anything that other people are saying about my family or what happened here or whatnot. Right now, I’m just bettering myself and becoming the best person I can.”

He leans on his mother and grandmother for support and said they jumped up and down when he signed with the Browns, the team he dreamed of playing for when he was a kid riding on I-90.

“Those are my two rocks and I rely on them a lot,” he said. “They’re always on my side no matter what.”

Coach Freddie Kitchens said Hunt’s on-field ability is a given, and that he’s been even more impressed with how he’s handled himself in the community.

“He is being the person and he is continuing to try to be the person that he wants to be and that everybody here wants him to be, and we are going to continue to support him in every way possible to do that,” Kitchens said. “He hasn’t denied anything. He owns up to it, but he also understands that is a platform to get better and affect other people.”

“They speak very highly of him,” Mayfield said. “And that is important. What guys say about you in the locker room speaks more about you than anything you will do on the field.

“Just being around him, I think he is a great kid. Mistakes happen. I can speak from personal experience.”

Hunt is excited to be back on the field after missing the final five games last season and looked explosive in practice. With Duke Johnson not attending the voluntary offseason program, Hunt was the No. 2 back behind Nick Chubb.

“It feels good to be back out here on the field again,” Hunt said. “I appreciate this organization and my teammates for accepting me. I’m ready to roll.”

Hunt is expected to take Johnson’s role when he returns from the suspension Nov. 10 against the Bills, and possibly receive some of Chubb’s playing time. Hunt led the league as a rookie with 1,327 rushing yards and added 53 catches.

The Browns have asked the league to modify its policy and allow Hunt to stay around Browns headquarters once the suspension begins Aug. 31 following the preseason.

“It would help me tremendously,” he said. “Football is my love and I love to be around the facility and the team and the locker room.”

Hunt will take another step in the personal transformation Sunday when he gets baptized.

“I’m excited about that,” he said. “I’m looking forward so I can feel reborn.”

Freddie Kitchens says it’s important for Odell Beckham Jr. to be “mentally ready to be here” after one-and-done practice
John Dorsey and Freddie Kitchens surprise Kareem Hunt at baptism to show their support for him “as a person”