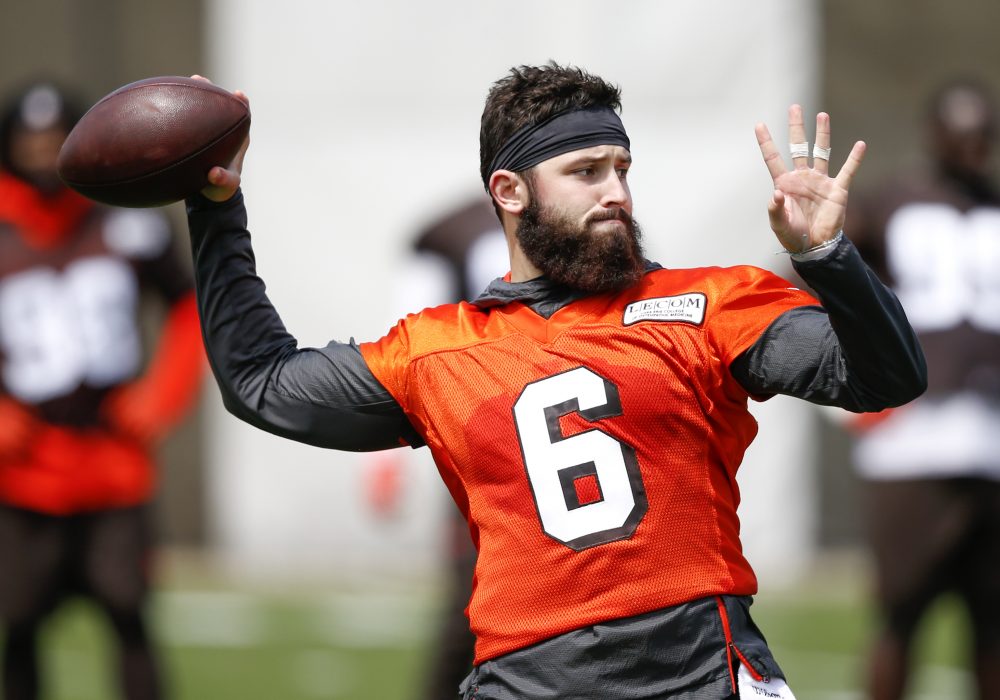 BEREA — Odell Beckham Jr. raised more than a few eyebrows when he told GQ recently that quarterback Baker Mayfield is “Brett Favre — he’s going to be a Hall of Famer.”

“Brett Favre was my favorite quarterback growing up so it got me a little fired up,” Mayfield said Wednesday. “If you don’t have the mentality that you want to be the best to ever play, then I think you are doing it for the wrong reasons. People can blow it out of context — whatever they want. He is just excited to be here, excited to get to work and start something new.”

Mayfield is back for his second season of organized team activities, but first as the starter. Last year he was a rookie learning the ropes and stuck behind veteran Tyrod Taylor on the depth chart.

“It is definitely a lot different position mentality-wise being the vocal guy here now, and it is a big difference from now to last year,” he said. “It is a great difference to be able to be that guy that people are looking at during OTAs and during meetings and stuff like that. That is important to me.”

Coach Freddie Kitchens has a simple goal for Mayfield as a leader.

“I want him to keep being himself,” he said.

Mayfield set an NFL rookie record with 27 touchdowns passes, adding 3,725 yards, a 63.8 completion percentage and a 93.7 rating. He knows what he’s trying to accomplish during the offseason program.

“Eliminating the rookie mistakes,” he said. “The change within me is taking ownership of all right, yeah, there’s some things that I haven’t seen before, some disguises, some game plans and different ways to study that I haven’t done before. Taking a first time through that last year, but now I need to take that next step. That is all behind me, move forward and get better.”

Mayfield was in the spotlight at the Kentucky Derby, calling “Riders up” and spending time with Patriots quarterback Tom Brady.

“Just being around the greatest of all time is obviously an honor and how he is with his teammates, the guys he played with in the past, how they speak so highly of him,” Mayfield said. “You don’t really talk about football in those situations, but how he treats everybody and how he handles himself is just some of the better examples of how to go through life. He does it all right.”

Mayfield had Maximum Security in the Derby, so he lost when the horse was disqualified.

Receiver Antonio Callaway, expected to be the third wideout, is getting a greater chance to impress the coaching staff and Mayfield with Beckham and Jarvis Landry missing much of the offseason program. He has taken advantage.

“I think I can speak for a few people, we have been very happy with how he came back from the offseason ready to go,” Mayfield said. “Just how quick he is and you can tell he has been working on his craft. That is very exciting to see that.”

Callaway was a fourth-round pick last year and had 43 catches for 586 yards and five touchdowns as a rookie.

“He is in good shape relative to what he was in last year during training camp,” Kitchens said. “He has added some explosiveness. He has been catching the ball really well. He is doing a good job.”

“He’s a number 1 receiver, many won’t understand but if you know about WR’s his ceiling is extremely high,” he wrote.

The voluntary offseason program is more than six weeks old, and running back Duke Johnson has yet to report. Kitchens said he communicates with Johnson a couple of times a week and expects him for the mandatory minicamp June 4-6.

“It is voluntary. There is nothing I can say,” Kitchens said. “He will know what to do and be ready to play.”

Johnson is frustrated by a lack of opportunities last season and the signing of Kareem Hunt, who’s expected to make Johnson expendable when he returns from suspension Nov. 10. Kitchens wishes Johnson were with the team.

“I would be lying to say that I wasn’t disappointed that we don’t have everybody here,” he said. “I want everybody here because I do think it is important to be here, but it is their option. I’m fine as long as they are ready to play.”

“You guys need to be around the next time that happens,” he said, declining to say what he’ll do. “I’m not telling you that. You will have to see.”

** Jermaine Whitehead saw a lot of time with the first-team defense as a nickelback and extra safety in sub packages.

Landry watched practice but didn’t participate as he deals with an undisclosed injury. Receivers Jaelen Strong and Rashard Higgins were among the other players who sat out.

** Mayfield, Landry and other teammates went to Cedar Point over the weekend.

“I love roller coasters. I have been going to roller-coaster parks for a while,” Mayfield said. “It is a really good one up here.”

** Running back L.J. Scott wasn’t at practice after signing Monday. He is an undrafted rookie out of Michigan State.

Notes: Good or bad, Freddie Kitchens “not interested in revisiting last year at all”
Notes: Austin Corbett hungry after sitting last year, ready to prove he belongs in starting lineup