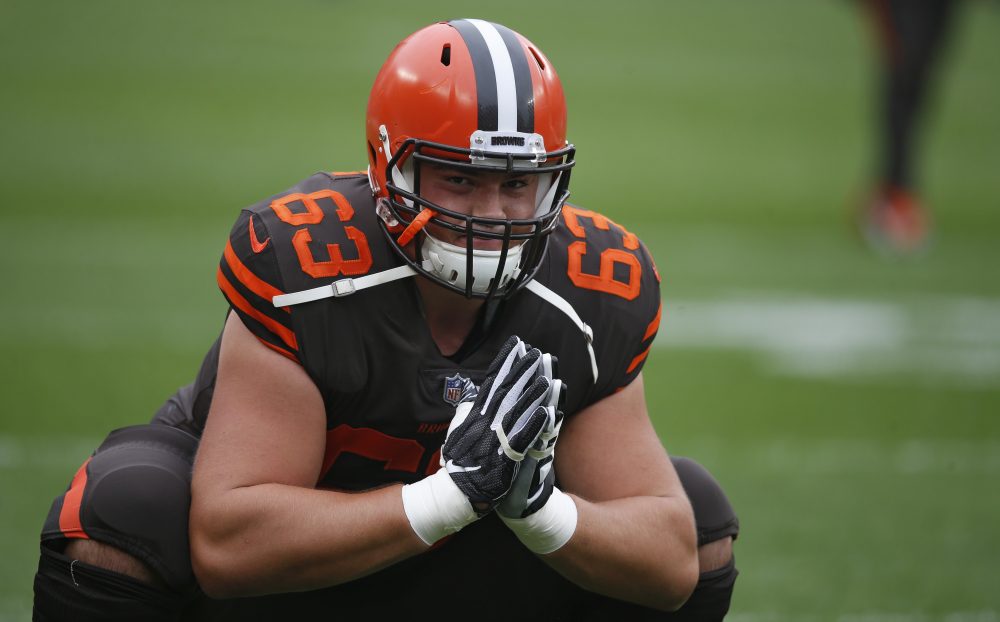 ROCKY RIVER — Offensive lineman Austin Corbett didn’t feel like himself last year. He spent almost all his time watching others play, with his action limited primarily to the scout team in practice.

“It was definitely weird,” Corbett said Monday at the Cleveland Browns Foundation golf outing at Westwood Country Club. “That’s not who I am as a competitor just to sit back, so it was tough. It was a little transition for me to understand my role, that I was going to be a look-team guy and I had to be ready at any moment for any one of those five to go down.

“That’s not who I am as a competitor to sit out, and so that hunger definitely built over the course of the year.”

He should be satiated rather than starved in Year 2.

General manager John Dorsey cleared the way for Corbett, the No. 33 pick in 2018, to start by trading reliable veteran Kevin Zeitler to the Giants for defensive end Olivier Vernon in March. Corbett opened organized team activities last week as the first-team right guard, and it’d be a surprise — and huge disappointment — if he didn’t stay there, perhaps for the next decade.

“Kevin’s a good friend and a real good player. Learned a lot from him last year, but then it turned into, ‘There’s a spot open. I’ve got a chance to go win this,’” Corbett said. “Freddie (Kitchens, coach) and Dorsey have been real clear that it’s not going to be given to me by any means. That’s not who I am. That’s not who I want to be. I don’t want to be given anything in life. So it’s a really great opportunity to go earn a starting position in the National Football League.”

Corbett played only 14 snaps on offense last year, 1.28 percent, after 49 starts at Nevada. In the limited action, he suffered a foot injury that sidelined him for three games late in the year.

The playing time and production wasn’t what’s expected from such a high draft pick, but Dorsey’s faith in Corbett’s ability to play at a high level didn’t fade.

“Their belief in me, it does mean a lot,” he said. “They are trusting me and opening up this spot for me. Now I just have to go and show and prove them right, that this is why they drafted me.

“I’ve got to go make it happen. It’s all on me. There’s no one else. If I don’t get the starting job, it’s my fault I didn’t do well, and if I do, that means I’m stepping up and I’ve got to keep showing them that.”

Corbett spent his career at Nevada playing left tackle, so he’s using the offseason to adjust to playing “right-handed” on the other side of the center.

“All the weight and balance in your stance is exactly opposite,” he said. “It’s just coming down to reps, and the more reps you get at it, the easier it is.”

He said he doesn’t feel added pressure stepping into a starting lineup loaded with big names and talent, such as receiver Odell Beckham Jr., running back Kareem Hunt and quarterback Baker Mayfield. He’s grateful to be a part of it.

“It’s been awesome to be out at OTAs so far and see their playmaking ability,” Corbett said. “As an offensive lineman, we take huge pride in that, because it’s up to us for them to make those plays. We’ve got to give them time, and if we give them a half a second more than they need, something cool’s going to happen.”

He felt he was ready to contribute even as he sat last season, and has been given the chance to prove it.

“Now it’s my time to really go show that I was watching and I wasn’t just messing around while I was not playing,” he said.

FOR A GOOD CAUSE

Owners Dee and Jimmy Haslam talked to the group about the strides made in both areas with the team’s contributions. A video depicting the work of the organization included the new turf field at Lorain High, with Titans coach Dave McFarland calling it “a centerpiece for our community.”

“This is a great event, huh?” Kitchens said. “I was amazed last year coming out for the first time just comparing it to other places I have been. This is remarkable what they do to keep kids in school.”

Maybe Dorsey scared him off. 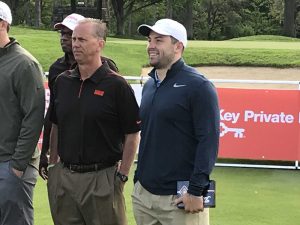 While Dorsey was addressing the crowded dining room, he singled out his quarterback.

“It’s a little windy today, hopefully you’ve been practicing up on your golf game there, big boy,” he said.

Mayfield posed for the group picture, participated in some charity events and played catch with a kid.

IN THE HOUSE II

Hunt, Corbett, left guard Joel Bitonio, linebackers Christian Kirksey and Joe Schobert and punter Britton Colquitt were among those who teed it up.

#Browns MLB Joe Schobert on the first tee. Liner down the right side. pic.twitter.com/1vrtRKdXMF

Kitchens didn’t play but was asked about his game.

He had both shoulders replaced over the last couple of years and plans to get back to playing.