Olivier Vernon appreciates Browns’ plan, glad to be part of it 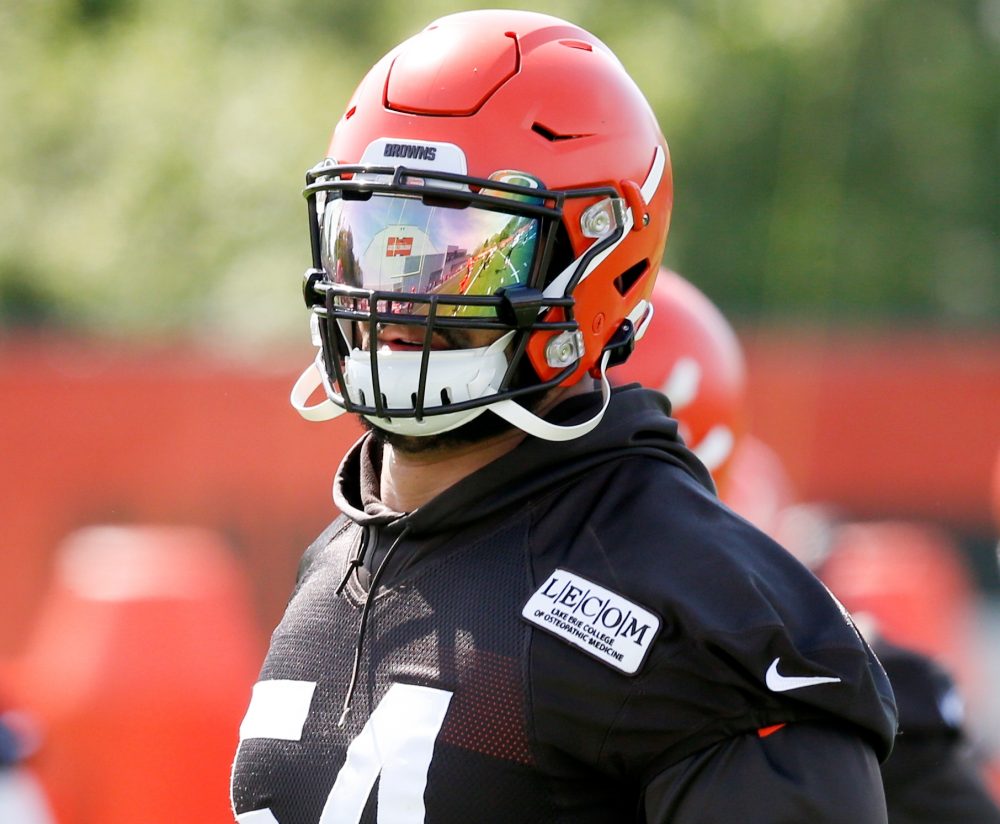 Olivier Vernon didn’t expect Odell Beckham to follow him to the Browns in a trade from the New York Giants in March.

“Oh, I had no idea,” Vernon, a 6-foot-2, 262-pound defensive end, said Wednesday during organized team activities. “I’ll take it, though.”

Vernon’s excitement was quickly followed by a realization.

“When they did say he was coming over here, I thought, ‘OK. All right. I see they got a plan,’” he said.


General manager John Dorsey’s work in 18 months with the Browns has received nearly universal praise. He took a roster that won one game in two years and turned it into a team expected to contend for the playoffs in the fall.

The excitement is palpable.

“The plan is set up. We’ve just got to execute it.”

Of the 22 projected starters, Dorsey brought in 15. He also turned over the rest of the roster, adding experienced veterans and needed depth.

The defensive line was the project Dorsey prioritized this offseason. Vernon was the signature piece.

On the Friday before the league year started and trades were allowed to be executed, Dorsey agreed to send right guard Kevin Zeitler to the Giants for Vernon. Four days later the Beckham deal came together, and the final package was Vernon and Beckham to Cleveland for Zeitler, safety Jabrill Peppers, the No. 17 pick and a third-rounder.

Vernon, 28, was a third-round pick of the Dolphins in 2012. After four years in Miami, he signed a five-year, $85 million free agent deal with the Giants, at the time the richest in league history for a defensive end.

He missed the first five games last season with a high ankle sprain but amassed seven sacks and five tackles for loss in 11 games to earn his first Pro Bowl trip. He did it while playing a bit out of position as a 3-4 outside linebacker.

“That is what I have been used to playing my whole career,” he said. “I’m kind of happy being back in a 4-3, but, still, it’s different. It’s a different playbook, a different scheme, but just got to work at it a day at a time and make sure to be a sponge, just try to soak up all the knowledge as far as the playbook and go from there.”

While Beckham has drawn some criticism for skipping all but three days of the voluntary offseason program, Vernon has been a regular participant.

“Honestly, I’m just here so I can learn the defensive playbook,” he said. “As far as working with the defensive line, us getting to know each other, building that chemistry is far different than I feel like when it comes to receivers. Receivers are with the quarterback. That’s a whole different world.

End Myles Garrett and tackle Larry Ogunjobi are promising young pieces on the front four. Vernon and tackle Sheldon Richardson, who was signed to a three-year, $37 million contract as a free agent, add experienced talent.

With so much focus on Beckham, coach Freddie Kitchens felt the need to remind reporters of the additions on defense.

“I don’t know if you guys have the AP wire. We signed some defensive guys that can play some football,” he said. “Hopefully you guys in the fall start talking about them a little bit.”

The line has the potential to be something special.

“Shoot, whatever we put into it is what we’re going to get out of it,” Vernon said. “So we’ve got great talent, but talent ain’t everything. We’ve just got to handle our business and do what we’ve got to do.”

Dorsey felt the need to upgrade at end after Emmanuel Ogbah had only three sacks in 14 games last year opposite Garrett. Vernon and Garrett should benefit from having the other, as the offensive line can’t double-team everyone.

“Everybody just plays off each other,” Vernon said. “You’re as good as your teammates. If the teammates are getting the job done and you’re doing your job at the same time, everybody’s going to prosper.”

Vernon said he and Richardson, 28, talked recently about suddenly being the elder statesmen of the line.

“It is a little weird,” Vernon said. “It’s crazy how fast it just happens. But we know what we’ve got to do. When it comes to talking to the young guys that’s trying to learn, feeding them as much knowledge as we got and what we’ve gained since being in the NFL.

“A young guy wants to come ask questions, I’ve got answers for you. You want to see some of the young cats get better.”

Kitchens said Vernon has been the guy the Browns thought he was.

With the proper priorities.

“Listen, I just want double-digit wins, to be honest with you,” he said when asked about getting double-digit sacks. “That’s all I want.”