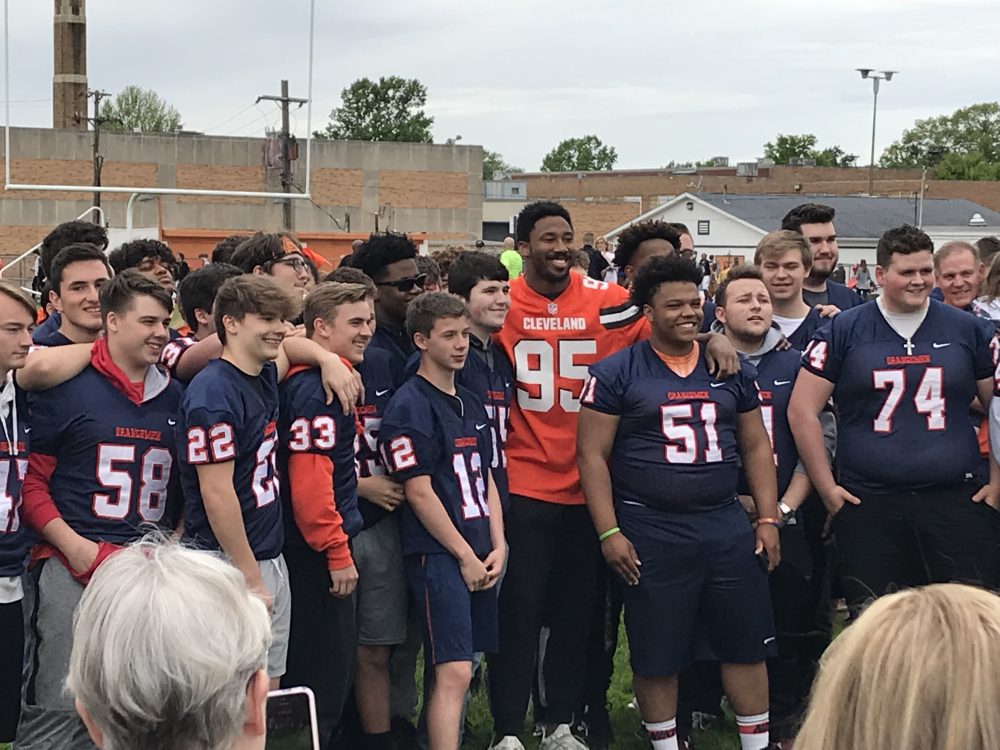 At least according to defensive end Myles Garrett.

“What they decide to do, I’ll be OK with and I’ll accept it and move on, but I think we’re good with what we have,” he said Tuesday at Ellet High School after a groundbreaking ceremony for a new turf field provided by the Browns. “I’m always going to be passionate about the guys we have in the locker room because they’ve always been OK with me, they’ve always done right by me, so I have no problem playing with them, going out there and sweating, bleeding and winning with them.”

Beckham believes he and receiver Jarvis Landry spoke his trade from the Giants to the Browns into existence by discussing it for months. Beckham made known his desire for McCoy to join them Monday night by replying to an Instagram post about potential landing spots.

Garrett objected to Beckham’s interference, with a smile.

McCoy was cut Monday because the Buccaneers couldn’t find a trade partner to take his $13 million salary. The rest of the league’s teams are now free to set a price for the six-time Pro Bowler.

McCoy, 31, reportedly wants to play for a playoff contender, which for a change doesn’t eliminate the Browns. They’re coming off a 7-8-1 season, made significant additions in the offseason, are the betting favorite to win the AFC North and are doing their research on McCoy.

The Colts, Chargers, Patriots and Cowboys are among others who make sense.

Garrett prefers to roll with the tackle tandem of free agent acquisition Sheldon Richardson and Larry Ogunjobi, who emerged in his second season last year with 5.5 sacks, 15 quarterback hits, 10 tackles for loss, 52 tackles and a forced fumble despite playing the last four games with a torn biceps.

“It’s going to be explosive in the middle,” Garrett said. “Either QBs are going to get sacked trying to step up away from me and Olivier (Vernon) or they’re going to step back and get clobbered by us two coming off the edge. It’s definitely going to be a really good pass rush and really good defensive line.”

Ogunjobi was a third-round pick out of Charlotte and Garrett predicted big things in Year 3.

“I think he’ll see me in the Pro Bowl this year,” he said. “I don’t think people have been able to see all of Larry. I think that first year we both were just getting our first looks at the NFL. Some people come in and have this gigantic splash, some people just got to smoothly transition into it and I think he made that large leap last year, he was just a little bit hindered. I think he’s out for a breakout year.”

General manager John Dorsey already remade the defensive line this offseason by trading for Vernon and signing Richardson to a three-year, $37 million deal. But he’s shown he’s not afraid to be bold, so McCoy can’t be ruled out.

But the league-wide demand for him and the contract he demands will be key factors.

The Browns have used much of their salary cap space but still rank fourth in the league with $33 million after the top 51 contracts, according to spotrac.com. The decision for Dorsey is whether he wants to use perhaps $10 million in 2019 at a position that isn’t a pressing need.

McCoy would add experience and give the team a potentially dominant three-man rotation in the interior. He had six sacks and 21 quarterback hits in 14 games last year. In nine seasons since being the No. 3 pick out of Oklahoma in 2010, he has 54.5 sacks and 79 tackles for loss in 123 games.