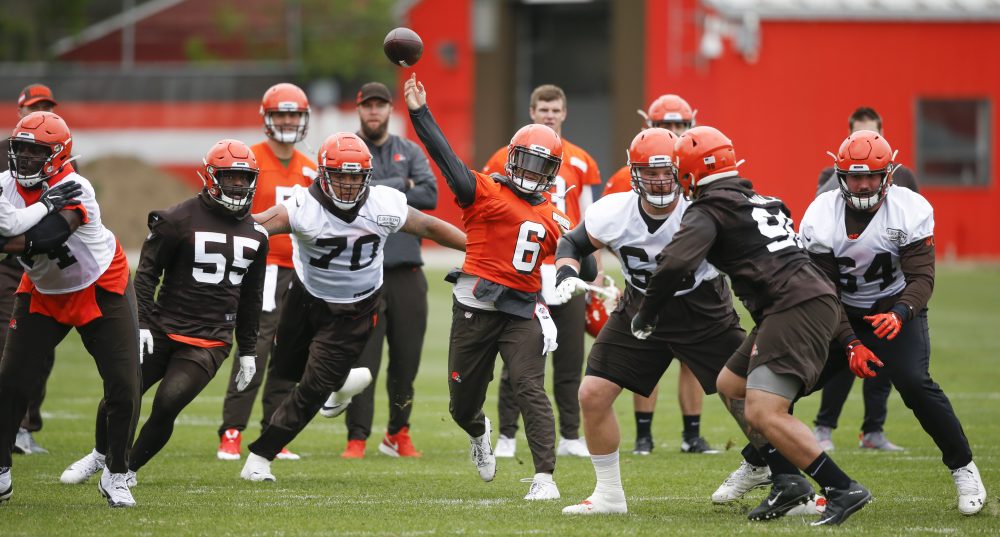 Monken said he wasn’t going to share the conversation with reporters, then elaborated anyway.

“I think a lot of Gerald,” he said Wednesday before an organized team activities practice. “Gerald has had a tremendous career and was an outstanding football player for us. He’s a great person.

“I won’t comment anything else about it — I know I can because he’s a free agent and they’ve let him go. Other than that, there were some other things that we talked about, but I like Gerald a lot.”

McCoy is available after the Buccaneers released him Monday because they were unwilling to pay the $13 million salary and couldn’t find a trade partner. The Browns have expressed interest and are among the teams that intrigue McCoy as he looks to join a playoff contender, according to a Cleveland.com report.

The Browns signed free agent tackle Sheldon Richardson to a three-year, $37 million contract in March and have promising third-year tackle Larry Ogunjobi, so they are unlikely to get into a bidding war for McCoy. But for the right price, he would give the Browns an impressive three-man rotation on the interior of the line.

To borrow a line from “Goodfellas,” he doesn’t think he’s a clown.

“You can certainly see the competitive spirit. The best way I can put it is: He likes to have fun but he’s not a clown,” Monken said. “I think people misconstrue how much fun he likes to have playing the game and around people, but I’m telling you when you’re in the meetings and you’re out here, he wants to be coached, he wants to be great. He’s a serious guy when it comes to the game of football.”

The Browns have had five OTAs practices, which is enough for Monken to get a sense of his new quarterback’s skill set.

“Tremendous arm talent,” he said. “And really, really has a unique knack once he gets outside the pocket to see receivers down the field and throw it accurately.”

Monken and Mayfield have experience in the Air Raid system, which means they like to play with tempo, without a huddle and in the shotgun. But Monken said it’s too early to tell how much of that will be incorporated in the offensive collaboration between him and coach Freddie Kitchens, who will call the plays.

New special teams coordinator Mike Priefer expects vast improvement from last season, and one of the reasons is a better use of the roster.

“I know that they were not allowed to use some of the personnel that was necessary,” he said. “That starts with the head coach, and I know Freddie has done a great job at saying, ‘Hey, Prief, whatever you need and it is going to help you win. If you need starters on offense, starters on defense to help on some of the phases, then use them and use the backups.’

** The punting competition is real.

Priefer said Jamie “The Scottish Hammer” Gillan, an undrafted rookie with a rugby background, has a legitimate chance to win the job from veteran incumbent Britton Colquitt.

“We would not have brought him in,” Priefer said. “I’m not really into camp legs. I know Britton is an older punter, but Britton was pushed last year and he was up for the challenge. I’m sure he’ll be up for it again this year.”

Receivers Rashard Higgins, Damion Ratley and Blake Jackson got plenty of work with the first-team offense as Odell Beckham Jr., Jarvis Landry and Antonio Callaway — the team’s top three wideouts — weren’t on the practice field. Higgins was back after missing a practice last week with an injury.

Beckham has attended one of the five OTAs sessions and just three days since the voluntary offseason program began April 1. Monken said that’s not ideal for Mayfield, and that he hasn’t been in contact with Beckham when he’s away.

“It is obviously a challenge for our quarterbacks in terms of the receiving corps that are out there, but that is part of the deal,” Monken said. “It is their job to make them right.”

** Running back Duke Johnson also continued his absence. He’s requested a trade and hasn’t attended any of the offseason program.

Rookie cornerback Greedy Williams, a second-round pick, was part of the first-team nickel package. He and Denzel Ward played outside, with TJ Carrie in the slot. Jermaine Whitehead was the strong safety in place of Burnett.

** Linebacker Christian Kirksey intercepted Mayfield when Jackson didn’t look for a pass over the middle.

** Kickers Greg Joseph and Austin Seibert each went 3-for-4 in a field goal drill. Joseph, the incumbent, missed from 37 yards. Seibert, a rookie fifth-round pick, missed from 42 with a low liner left.