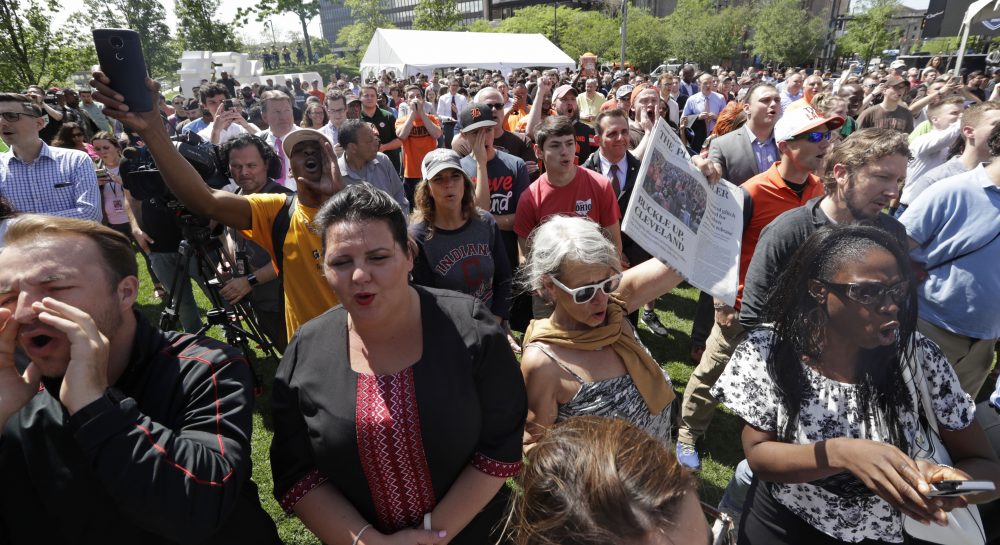 CLEVELAND — As sunshine splashed the Terminal Tower and Old Stone Church, the celebration started on the playground between the majestic landmarks.

The Browns and the city held a news conference and fan tailgate Thursday on Public Square to commemorate Cleveland being picked to host the 2021 NFL Draft.

“We have arrived once again as the capital city of football in the United States, right here in Cleveland,” said master of ceremonies Jim Donovan, the radio voice of the Browns.

General manager John Dorsey posed for pictures. Fans played cornhole and tried to throw footballs through tires. Orange and brown were everywhere in the crowd — on jerseys, hats and even a prosthetic leg.

The party was nothing compared to what it will be in 23 months when the NFL descends on Northeast Ohio, with the lakefront a star of the show.

“I think we’ll wow them as well in our own special way,” he said. “It’s for the fans and the city. It’s huge. Just to show off Cleveland and Northeast Ohio is a huge win.”

“Rock the Clock” was the theme — the event ended with Bill Haley and His Comets’ “Rock Around the Clock” blaring through the speakers — playing on the city’s rock ’n’ roll roots and teams “going on the clock” to make their picks during the draft. The grass on the Square filled with fans in the afternoon sun to kick off the holiday weekend.

“This crowd hopefully already starts to show our friends at the NFL why they had the confidence to choose Cleveland,” Gilbert said.

The draft is the latest impressive line on the city’s resume. It will host the Major League Baseball All-Star Game in July, the men’s NCAA Tournament in 2020, the NBA All-Star Game in 2022 and the NCAA Women’s Final Four in 2024.

“Attracting these kinds of events like the draft most importantly should make Clevelanders proud that we’re a wonderful place and that we deserve to get this,” Gilbert said. “They all chose Cleveland.”

The draft is expected to generate at least $100 million in economic impact for Northeast Ohio, according to Gilbert. A successful Republican National Convention in 2016 showed the region can handle the spotlight and an influx of people.

“We take pride in putting on those events and making them successful,” said Jackson, who was interrupted by a “John Dorsey” shout from the crowd. “Everything that we’ve done in Cleveland that we’ve been successful at we’ve done as one community. And that’s what this represents.”

Dorsey called Browns fans the “most passionate” in the NFL and said being awarded the draft is a “direct tribute” to them, the franchise and the city.

The draft has become the league’s marquee event of the offseason — 600,000 people attended in Nashville, Tenn., in April, and nearly 50 million watched on TV — coming a long way from when Dorsey was drafted in the fourth round in 1984.

“When I got drafted I was sitting around the table with my dad and Uncle John and the phone rings and it’s Forrest Gregg calling, ‘Hey, you’re a Green Bay Packer,’” Dorsey said. “He goes, ‘You want to be a Packer?’ I go, ‘Sure.’ And then he goes, ‘OK,’ and he hung up the phone.

“And then you get to where it is now. It shows you the growth of the National Football League.”

The announcement of the draft comes at a time when expectations and excitement for the Browns are soaring. Hopefully they’ll have something on the field to celebrate first.

“Maybe we’ll have a parade before that,” Johnson said.