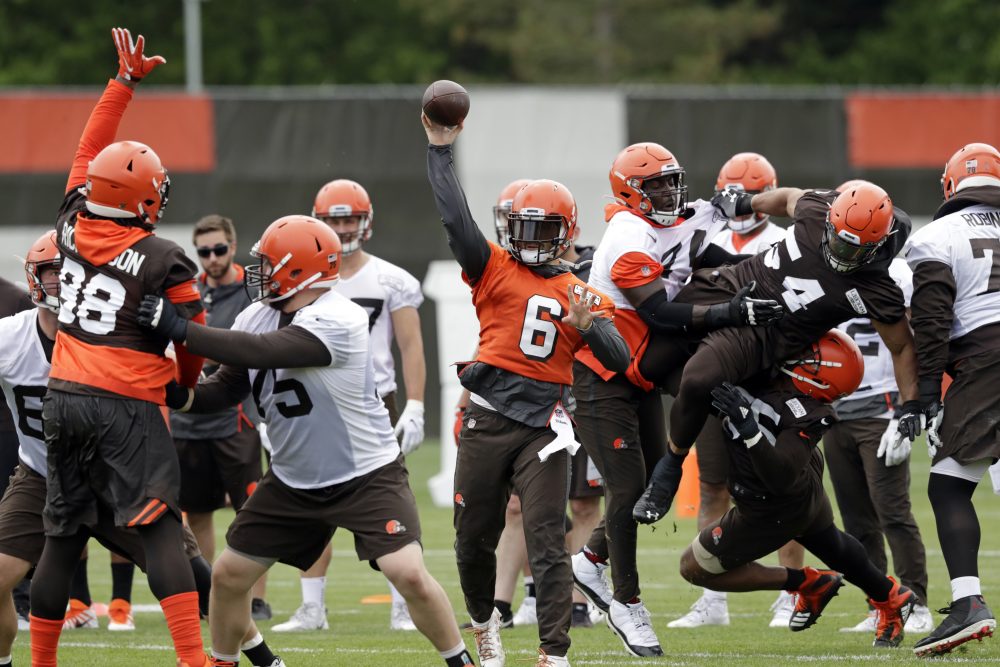 “We want Gerald to go out and look at other places because when he makes the commitment here, we want him to be all-in because everybody that’s going to be here is gonna be all-in and that’s what we need to get to where we’re going,” Kitchens said Thursday after an organized team activities practice. “So we’re fine with him taking a look at everybody else, all right? Because we’ve told him who we were and if that’s who he wants, he’ll end up here and he knows the direction we’re headed.”

Kitchens said the door is still open for the Browns to sign McCoy, 31, and he’s optimistic a deal will get done.

McCoy, a six-time Pro Bowler, was cut May 20 by the Buccaneers to avoid paying his $13 million salary. His first visit was with the Browns last week.

“I like the person. Of course, I like the player, but more importantly just getting to know the kid and I really like him,” Kitchens said of their time together, adding the visit “went as good as it could.”

McCoy’s visit with Browns ends without contract but not hope

McCoy was in Baltimore on Tuesday and Wednesday but also left there without a contract. The Panthers are the last reported stop on his tour, although that could change if he doesn’t receive an offer he deems acceptable. He likely wants at least $10 million a year.

McCoy would join Sheldon Richardson and Larry Ogunjobi on the interior, and give the Browns four Pro Bowlers on the defensive front — Richardson and ends Myles Garrett and Olivier Vernon. Kitchens said they didn’t get specific during the visit about what McCoy’s role would be.

He cited a stat that the chances for an offense to score in the last two minutes dip under 20 percent after a sack.

“So he knows where we want to put pressure on the quarterback, he knows that’s what we’re going to be about and hopefully he wants to be a part of it,” Kitchens said.

McCoy didn’t make the playoffs in his nine years with the Bucs, so joining a team with playoff expectations is reportedly a priority. That aligns with Kitchens’ approach.

“That’s always our goal, and if that’s his goal, he’s coming to the right place,” he said.

McCoy amassed 54.5 sacks and 79 tackles for loss with the Bucs and emerged as a strong leader.

“He’s been in the league a long time. He’s been to the fire. He would offer all those things,” Kitchens said. “We’re still young up front.”

Running back Duke Johnson skipped the entire voluntary portion of the offseason program after requesting a trade following the signing of Kareem Hunt. Dontrell Hilliard has taken advantage of an increased role in Johnson’s absence.

“I liked his versatility, his acceleration, his speed, his hands, his ability to make moves, cuts, avoid defenders,” Kitchens said of Hilliard as a rookie last year. “Dontrell is a good football player. He’s a special guy on special teams, too.”

Kitchens expects Johnson to attend mandatory minicamp Tuesday through Thursday despite his trade request and extended absence. If he doesn’t, he’d be subject to fines from the team.

“It’s mandatory,” Kitchens said. “He should be here.”

The Browns have used Hilliard some at receiver during OTAs, a role Johnson held the previous two years.

“All I know is that Freddie and Coach Monken (Todd, coordinator) have expressed how much they want Duke to be a part of this team,” running backs coach Stump Mitchell said. “There’s things that we want to do. We’re still trying to do those things, but now we’re trying to do them with Dontrell and he’s looking pretty dadgum good.”

Austin Corbett, the No. 33 pick in 2018, is the favorite to be the starting right guard after the offseason trade of Kevin Zeitler, but he’ll have to earn it.

For the second straight week during the practice open to reporters, Kyle Kalis was the first-team right guard and Corbett the second-team center. Veterans Eric Kush and Bryan Witzmann have also gotten reps at right guard during OTAs.

“I think all those guys are legitimate contenders,” Kitchens said.

If Corbett didn’t win the job, it would be a big disappointment given his draft status.

“We’re in May, everyone’s rotating with the starters, everyone’s getting different reps,” Corbett said. “I’m doing my own thing.”

Receiver Jarvis Landry watched Thursday but hasn’t practiced in OTAs as he deals with an injury. Kitchens said Landry likely won’t practice next week at minicamp.

** Kickers Austin Seibert, a fifth-round pick, and Greg Joseph both went 5-for-5 in a field goal drill, with the long from 52 yards.

Rookie cornerback Greedy Williams, a second-round pick, continued to get time with the starters.