4 things to watch at minicamp, including the return of Odell Beckham Jr. and Duke Johnson and receiver help for Baker Mayfield 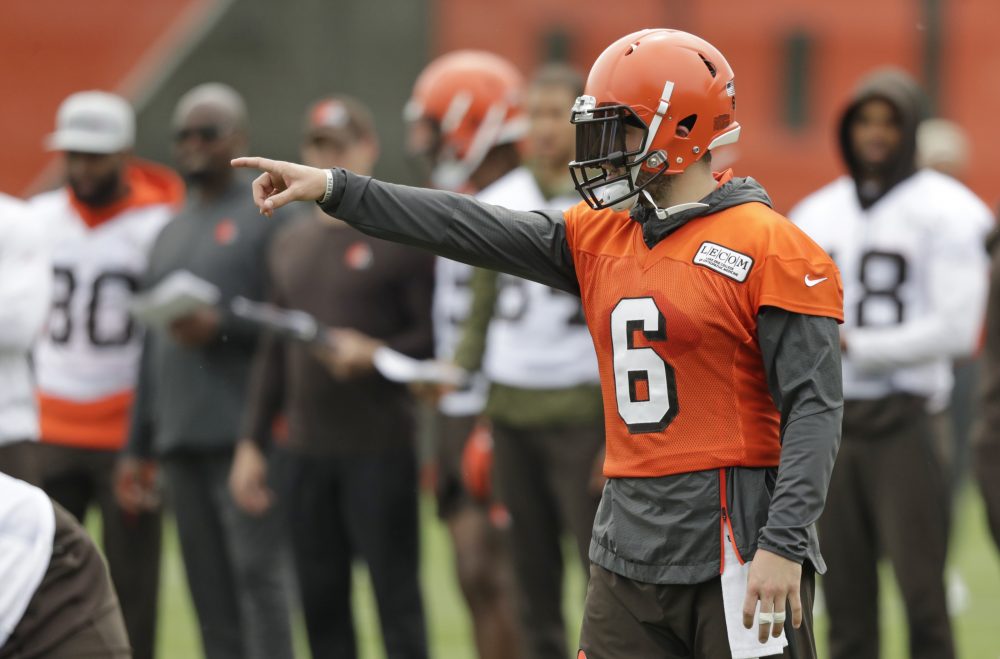 Summer is right around the corner — despite how the thermometer read Monday.

The Browns are just days away from beginning their summer vacation — a seven-week break before the most anticipated training camp in recent memory begins in late July.

But before the players travel to the world’s most interesting spots (Odell Beckham Jr.) or get married (Baker Mayfield), they have mandatory minicamp Tuesday through Thursday in Berea. Coach Freddie Kitchens has a long list of tasks to accomplish, and here are a few things to watch.

After attending only one of nine organized team activities practices over the last three weeks, Beckham arrived in Berea on Monday for the minicamp.

Reporters have yet to see Beckham practice with the Browns, so the cameras will be trained on No. 13, desperate to capture a one-handed catch.

Kitchens seemed frustrated with his absence last week, saying Beckham had missed “a lot — the offense” by staying away for all but three days of the voluntary offseason program. So he’ll be playing catch-up this week, leaning on Mayfield, receivers coach Adam Henry and receiver/best friend Jarvis Landry to learn the playbook.

Beckham has been training in Los Angeles, but his lack of time in Berea could lead to a reduced role this week to avoid a soft-tissue injury before training camp. Assuming he’s able to practice to some degree, it will be fun to see him work with Mayfield and compete against cornerbacks Denzel Ward and Greedy Williams.

Beckham has only talked to local media once, at his introductory news conference April 1, so there’s plenty to ask. The questions will surely include why he hasn’t been around more.

General manager John Dorsey and Kitchens pointed to the “mandatory” modifier in saying they expected running back Duke Johnson at minicamp. Any absence is subject to a fine from the team.

Johnson didn’t disappoint, arriving Monday and posting a picture of his familiar locker on Instagram.

He requested a trade after the Browns signed Kareem Hunt in February and Dorsey told reporters Johnson wasn’t expendable “yet.” That was a tipping point for Johnson, who had already grown frustrated over a lack of opportunities last season.

He didn’t attend any of the voluntary offseason program.

But Dorsey didn’t get a trade offer he deemed acceptable and values Johnson too much to give him away for a sixth-round pick. The Browns are hoping the hard feelings can be smoothed over, because Johnson could have a significant role in the offense — at least until Hunt is eligible after an eight-game suspension.

Interviewing Johnson for the first time this year should be interesting.

Help from his friends

Before Kitchens and quarterbacks coach Ryan Lindley tried to spin it, offensive coordinator Todd Monken acknowledged the reality of the situation: the absence of his top receivers hurt Mayfield during OTAs.

Beckham skipped eight of nine sessions, Jarvis Landry didn’t practice at all with a minor injury that’s expected to sideline him again this week and Antonio Callaway missed the last two practices open to reporters and probably more. They are expected to be the first three wideouts on the depth chart in the fall.

If that weren’t bad enough, Rashard Higgins, Damion Ratley, Derrick Willies and Blake Jackson — in the mix for the other three roster spots — also missed time with injuries.

Mayfield continued to throw ropes all over the field but would look much better with better talent surrounding him. Hopefully Beckham, Callaway and others are on the field the next three days to provide a glimpse of just how explosive the offense can be.

The fight is on

The depth chart is far from a finished product in May or June, but it still means something. So it’s worth watching right guard this week to see how much time Austin Corbett spends with the first team and who else works with the starters.

When Dorsey traded right guard Kevin Zeitler to the Giants in March for Vernon, it was supposed to clear the way for Corbett, the No. 33 pick in 2018, to step into the starting lineup. While he remains the favorite to win the job, he’s embroiled in a competition.

St. Edward graduate Kyle Kalis worked with the starters during the last two practices open to reporters, and veterans Eric Kush and Bryan Witzmann have also gotten reps with the ones.

The decision on a starter won’t be made until plenty of time is spent in pads during training camp and the preseason, but the workload and performances in minicamp matter. Especially for Corbett.