Duke Johnson still wants to be traded, says Browns weren’t loyal when they put him on trade block 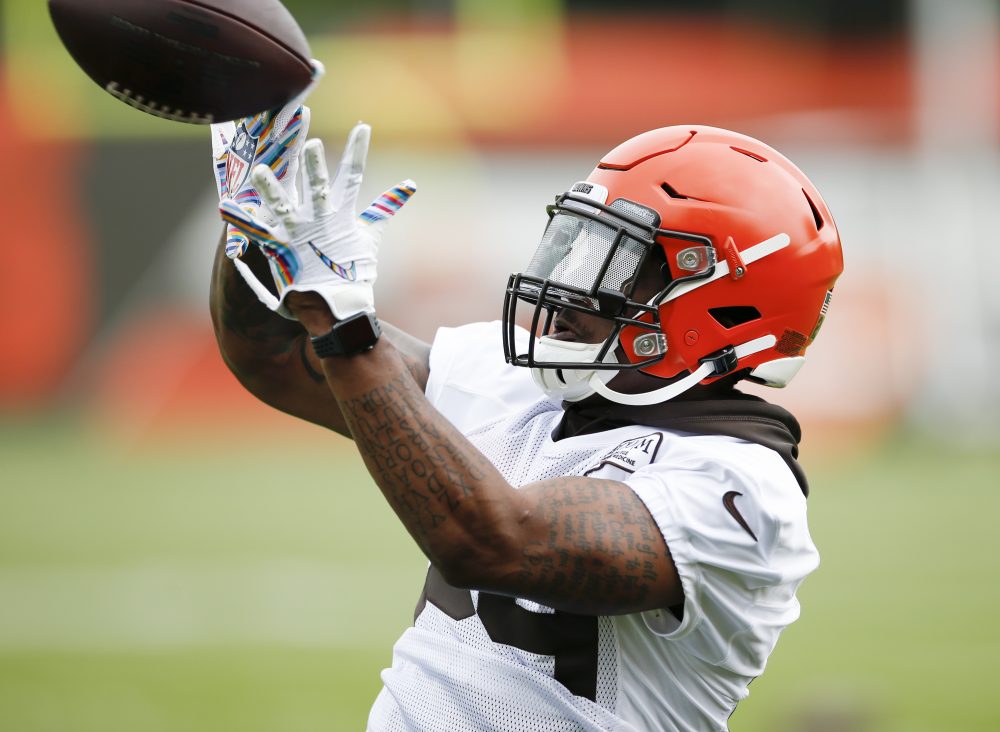 BEREA — Duke Johnson reunited with teammates. He got an embrace from coach Freddie Kitchens. He took handoffs and caught passes.

He still wants to be traded.

“I only want to be somewhere I’m wanted,” Johnson said Tuesday at the start of mandatory minicamp after skipping the entire voluntary program. “If you don’t want me here, there’s no need to keep me or force me to be here.”

Johnson, the versatile running back, requested a trade through his agent April 1, and hasn’t changed his mind. He was adamant he only asked to be traded after the Browns had put him on the trade block following the signing Feb. 11 of dual-purpose running back Kareem Hunt.

“To be fair, my thing is I’m big on loyalty,” Johnson said. “I’ve felt as I’ve been loyal to this organization through it all, and the moment the loyalty stops, it stops on both ends. It’s not a one-way street. It stops on my end.”

Johnson believes his loyalty was on full display when he signed a three-year, $15.6 million extension last offseason following 1-15 and 0-16 seasons.

“I think it showed with my actions and the way I’ve carried myself through two horrible seasons, and then, after the worst of the worst, I re-signed here,” he said. “I’m not a fortune-teller. I didn’t know a couple years later we’ll assemble one of the best teams on paper. No, I was committed to this organization and to the city.”

General manager John Dorsey offering him in trades ended the loyalty in Johnson’s mind. It didn’t stop his commitment to the team.

“I’m flat out saying right now he’s under contract,” Kitchens said. “He’s a part of the team. We’re going to have a plan for Duke, and I expect him to have a good year.”

Johnson said there’s nothing the organization can do to make him feel wanted again but he vowed to act like a professional.

“I won’t be a disgruntled employee. I won’t be causing scenes and losing focus on what’s really important,” he said. “I’m here to do a job, and I’m going to do that job for as long as I’m here.

“Me being upset and me still wanting to be traded is not going to stop me from coming out here and performing at a high level.”

“He’s a playmaker. I believe he’ll be just fine,” he said. “When he gets back on the field, he won’t be a distraction at all. Go back to stiff-arming people and shaking people out of their cleats.”

Dorsey has been willing to trade Johnson since signing Hunt. But Hunt was suspended by the league for the first eight games, and Dorsey has refused to deal Johnson for less than he deems acceptable. He and Kitchens have insisted Johnson will play an important role in the offense, and he’s a quality insurance policy if Hunt fails to regain his eligibility.

“Obviously he’s going to handle his stuff how he wants, but you’re either on this train or you’re not, it’s moving,” Mayfield said. “You can get out of the way or you can join us.”

He objected to the idea that Johnson is in a weird spot being on the team while wanting to leave.

“It’s self-inflicted,” Mayfield said. “It’s not awkward, for anybody else in this building.

“He’s got to do his job. He said he’s a professional, I hope he does his job.”

Kitchens is confident he will.

Kitchens put his arm around Johnson during the walk-through portion of practice and talked to him for an extended time.

“I just like giving hugs,” Kitchens said. “I coached Duke last year. So I know Duke. Duke knows me. No, it wasn’t about anything other than, ‘How you been?’ I hadn’t seen him in five months or six months.”

Johnson has never been satisfied with his role in the offense, and that was especially true last season. He rushed a career-low 40 times and caught a career-low 47 passes, just a season after combining for 1,041 yards from scrimmage and being voted the team’s player of the year.

Finding out the Browns were trying to trade him changed his mindset.

“I just think it’s better for me to get ahead of this, and if I’m going to be with a new team, I prefer it be before midseason just to give me a fair shot and just a chance to actually make a difference and play,” Johnson said, referring to the in-season trade deadline.