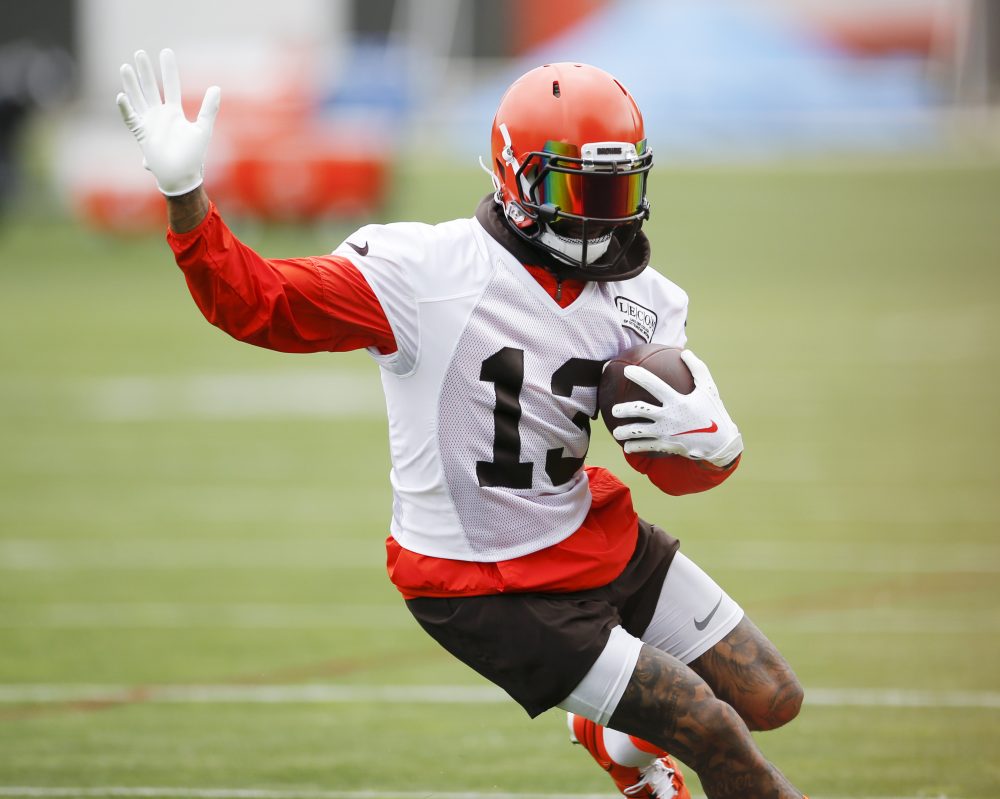 BEREA — Odell Beckham Jr. enhanced his plain white No. 13 jersey with a bright orange long-sleeve shirt underneath. He had the socks and cleats embossed with “OBJ” to match.

Beckham was back with his new Browns teammates Tuesday at mandatory minicamp and was easy to spot.

Especially when he caught a touchdown.

Beckham made a slight move toward the corner of the end zone, then exploded back to the middle for a skinny post. He created about 6 yards of separation from cornerback TJ Carrie in an instant and reached up to snatch a dart from quarterback Baker Mayfield in the red zone drill.

Beckham, the three-time Pro Bowl receiver, practiced with the Browns for only the second time. He was acquired March 13 in a trade with the Giants and attended one of nine organized team activities practices.

He was in Berea for just three days during the two months of the voluntary offseason program, drawing criticism from some in the media and fan base. Kitchens sounded frustrated with Beckham’s absence last week when he said he had missed “a lot — the offense” but tried to walk it back Tuesday.

Sounding frustrated, Kitchens talks about what Beckham missed at OTAs

“It was voluntary, guys. All right. It was voluntary,” Kitchens said. “You guys take comments that I make last week and turn it into something other than what the comment actually meant. I was looking forward to seeing Odell. I truly was. I’m not going to bulls— you.

“He missed a lot. He understands that, but he didn’t really miss as much as you really think because he’s been studying every night just like these other guys, he just hasn’t been here. He felt it more compatible for his body to get in good shape and be at the best he could be when he got here. Would I have liked him here? Yes. No doubt about it. I want everybody here. But he didn’t have to be here, it’s voluntary.”

Beckham appeared to knock off the rust quickly. He is scheduled to talk to reporters Wednesday for the first time since his introductory news conference April 1.

“He’s a very bright guy and he picks up things very quickly. Even over the phone.”

Mayfield agreed Beckham missed plenty during his time away, including building chemistry and relationships with his new teammates.

“It’s important for this team, the mentality that we have, we’re all in it together,” Mayfield said. “That’ll grow and come with time.”

Mayfield was asked if he was OK with Beckham’s schedule.

Receiver Jarvis Landry helped keep Beckham up to speed with the playbook and offensive installation and is glad to have his best friend back in the building.

“It’s good to have him back and have his leadership around, his presence,” said Landry, who added he attended the offseason program in his role as a leader and to support Kitchens in his first year as head coach. “It’s a good feeling.

Beckham didn’t take a ton of repetitions in practice but went through the receiver drills — he showed off his famous footwork and trademark one-handed catch – and worked in with the starters on occasion during team drills. Mayfield overthrew him on a deep corner route, and Beckham dropped a shallow cross.

“It’s obviously still early in the process, but we’re going to kick it into a little overdrive here pretty soon,” said Mayfield, who plans to throw with Beckham and other Browns receivers over the summer break. “Just keep building that. We don’t have to be perfect right now, but we’re building for that. Still a long way away from Game 1, but we’ve got to be ready for that.”

Duke Johnson still wants to be traded, says Browns weren’t loyal when they put him on trade block
Odell Beckham Jr. “giddy,” says he feels “something in the air, something special that Cleveland hasn’t had for a while”