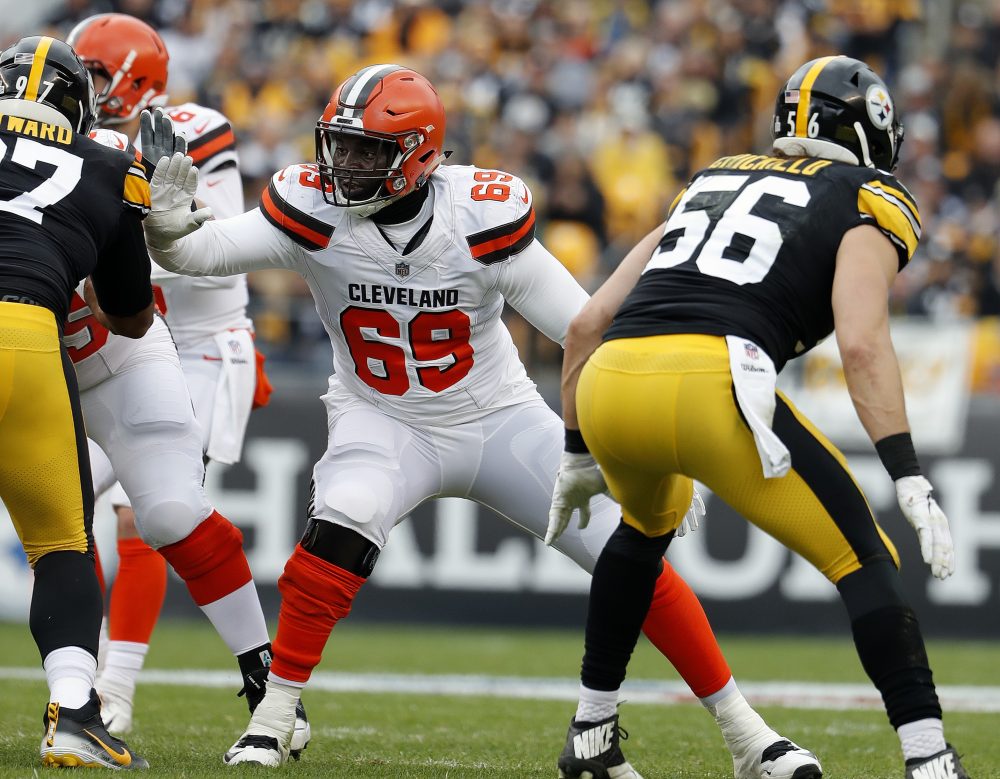 “To a man, you can ask those guys. I expect our defensive line to be the strength of our football team,” he said Wednesday after minicamp practice. “I am only worried about the guys who are here and the guys who want to be here.”

The Browns hosted McCoy on a visit and pursued him for more than a week but he chose the Carolina Panthers on Monday.


“If he would have came, it would have helped us, if not, we’re fine where we’re at,” defensive tackle Sheldon Richardson said. “I like our potential already. And no one’s taking my spot.”

Richardson signed a three-year, $37 million deal in March as a free agent and will play the three-technique. He didn’t plan on giving up that role to McCoy, who also plays that position.

“They’d have probably put us on the field at the same time,” Richardson said. “He knew he was going to be playing nose from what I hear, but other than that I’m probably one of the main reasons he didn’t come.”

Richardson believes the Browns have the potential to be the best line in the league. He and ends Myles Garrett and Olivier Vernon have been to a Pro Bowl apiece, and tackle Larry Ogunjobi is considered a rising star by some.

Kitchens believes the depth of the line is a separator.

The promise offensive lineman Desmond Harrison showed last year won’t be fulfilled with the Browns. He was waived Wednesday afternoon.

Harrison, who was undrafted last year after bouncing around college programs and being out of football for a while, started the first eight games as a rookie, stepping into the spot All-Pro Joe Thomas had filled for nearly 11 years. His teammates and coaches consistently praised his physical gifts, but he struggled to make the jump from tiny West Georgia.

“We just decided to move on,” Kitchens said.

Harrison was inactive for the ninth game with an illness and was replaced by veteran Greg Robinson, who kept the job for the rest of the season as the Browns went 5-3 and allowed a league-low five sacks. The Browns re-signed Robinson to a one-year, $7 million deal in the offseason and he’s slated to start again.

Harrison skipped at least a few practices during the organized team activities last month and wasn’t on the field Tuesday for the start of minicamp. Kitchens said he missed a flight and was late arriving.

“He needs to be more accountable to his craft, be more focused on what he does,” new offensive line coach James Campen said last week. “But certainly he’s athletic and can do anything you want him to do. He just has to be more consistent.”

After quarterback Baker Mayfield watched and listened to running back Duke Johnson say he still wanted to be traded Tuesday, he didn’t hold back his criticism.

Johnson adamant he wants to be traded, feels Browns weren’t loyal to him

The tension was real, but Kitchens downplayed it Wednesday.

Commissioner Roger Goodell has floated the idea of reducing the preseason from four games and extending the regular season to 18 games, and they could be part of the negotiations for the next collective bargaining agreement. The current one expires after the 2020 season.

Richardson took a pragmatic look at the idea.

“Lessen the preseason games is going to suck for the guys who are coming in and prove themselves,” he said. “But if you extend the season, shorten the preseason, that’s just how I look at it. And guarantee more money.”

Rookie cornerback Greedy Williams, a second-round pick, intercepted two Mayfield passes, returning one for a touchdown in a two-minute drill. Williams sat on an out route by receiver Antonio Callaway, and Mayfield threw the ball right to him.

** Garrett didn’t like Kitchens’ playlist during stretching and unplugged the stereo during a Hank Williams Jr. song.

“It is not,” Kitchens said when asked if that was OK.

** Veteran Eric Kush was the starting right guard as the coaches continue to rotate guys in that spot. Austin Corbett got the first-team reps Tuesday.

** Greg Joseph was 4-for-4 in a kicking drill, and rookie Austin Seibert was 2-for-4 with misses wide right and left.

On SportsBetting.ag, the Browns have received the most bets to win the Super Bowl since late January. Their odds have dropped from 25-to-1 to 14-to-1.

** Running back Kareem Hunt and Steelers cornerback Joe Haden, who played with the Browns from 2010-16, will participate in Jarvis Landry’s celebrity softball game June 15 at Classic Park in Eastlake. Former Browns quarterback Bernie Kosar will throw out the ceremonial first pitch.

Notes: Damarious Randall says he loves Cleveland, wants to finish career here, excited to play closer to line of scrimmage this year
Notes: Freddie Kitchens says he’s nervous when the players are away but trusts them to stay out of trouble