Greedy Williams quickly gets past questioning whether he fits in NFL, starts making plays in starting lineup 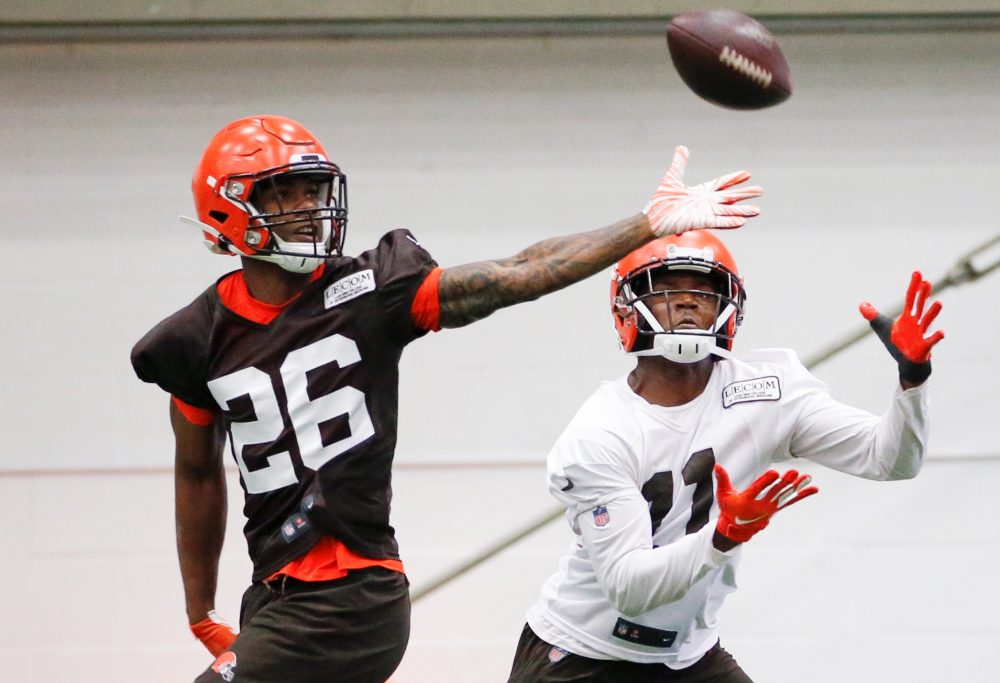 BEREA — Greedy Williams had a pick-six of Baker Mayfield. He held his own against Odell Beckham Jr. He became a fixture on the first-team defense.

No wonder the rookie cornerback was all smiles at the conclusion of minicamp Thursday.

“Just having fun with the game and my confidence and my comfort,” he said. “I think I’m well-equipped and I’m ready just to rock and roll.” 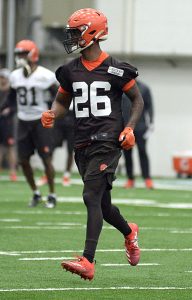 Williams, the No. 46 pick, wasn’t always so sure of himself. After looking hesitant during rookie minicamp, the struggles continued at the start of organized team activities. He said he felt like he was letting down the defense after giving up a few completions.

“It was bad,” he said. “I was just questioning myself, like ‘Am I fit for this?’ But as it gets going, you get comfortable and get your confidence back up under you and everything played out well.”

Cornerbacks must have short memories and mental toughness.

“I ain’t never give up,” said Williams, who added he also took the job more seriously and trusted the coaches. “Just stay focused, maintain and every day I wanted to get better.”

Williams embraces falling into 2nd round, “My place was to be in The Land”

Coordinator Steve Wilks mixes up the calls for the corners, and the 6-foot-2, 185-pound Williams had to get used to the variety, including playing more off coverage.

“It’s a lot of change-up, but nothing was just uncomfortable. Everything was understandable,” Williams said. “I just needed the reps at it. Once I got comfortable with it, I was able to dominate.”

Williams quickly found himself working opposite Denzel Ward with the starters, with veteran TJ Carrie in the slot. Williams had a couple of pass breakups Tuesday, upped the ante with a pair of interceptions of Mayfield on Wednesday and avoided any big breakdowns.

“Just working my way in,” he said of the starting lineup. “Like I always say, coming in and watching extra film, getting done what I need to do. I pushed up to the ones and been practicing well with the ones and I’ve kinda kept there for a minute. But all spots are open, and my job is just to maintain where I’m at.”

Pass game coordinator/secondary coach Joe Whitt said it’s too early to say if Williams will be a starter in the regular season but likes the progress he’s made.

“He’s a very talented young man and I’m glad that we have him,” Whitt said during OTAs last week.

Williams’ touchdown came in a two-minute drill when he sat on the out route from receiver Antonio Callaway, gobbled up the pass and streaked down the sideline.

Kitchens wondered what would’ve happened if Callaway had run an out-and-up, but Williams wasn’t worried.

“I just know my defense, knowing the things I can do with that defense,” he said. “I had a high safety over the top, so I can kind of sit on the little routes. Knowing the defense gives you an edge on when you can make plays, when you can’t.

“Before the snap, I already had my mind set, if they run an out, it was going to be a pick.”

The adjustment to the big leagues for Williams included one-on-one matchups with Beckham, a three-time Pro Bowler. Williams let out a chuckle when asked what that’s like.

“He’s a different receiver,” he said. “Playing one of the top receivers in the NFL, when you first get out there you don’t know what to expect, but after awhile getting to go against him you know kinda what type of guy he is. He’s one of them receivers you don’t want to really face man-to-man every play.”

The tough assignment will serve him well as he progresses in his career.

“No doubt. He’s one of the top guys, if not No. 1,” Williams said. “So just going up against him I know is going to boost my game 10 times better and show me what I need to work on against great receivers like him.”

The next step for Williams is feeling comfortable enough to talk trash like he did at LSU.

“I’m still in my humble stage, man,” he said. “I’m still like just trying to pick up on everything, get used to it and come out in whatever game I get in and just be the best and gain my team’s trust.

Odell Beckham Jr. all-in with Baker Mayfield: “That’s my guy … I’m always going to back him”
Denzel Ward gives back and honors dad with camp at alma mater, says facing Odell Beckham Jr. will help his game reach “next level”