Odell Beckham Jr. all-in with Baker Mayfield: “That’s my guy … I’m always going to back him” 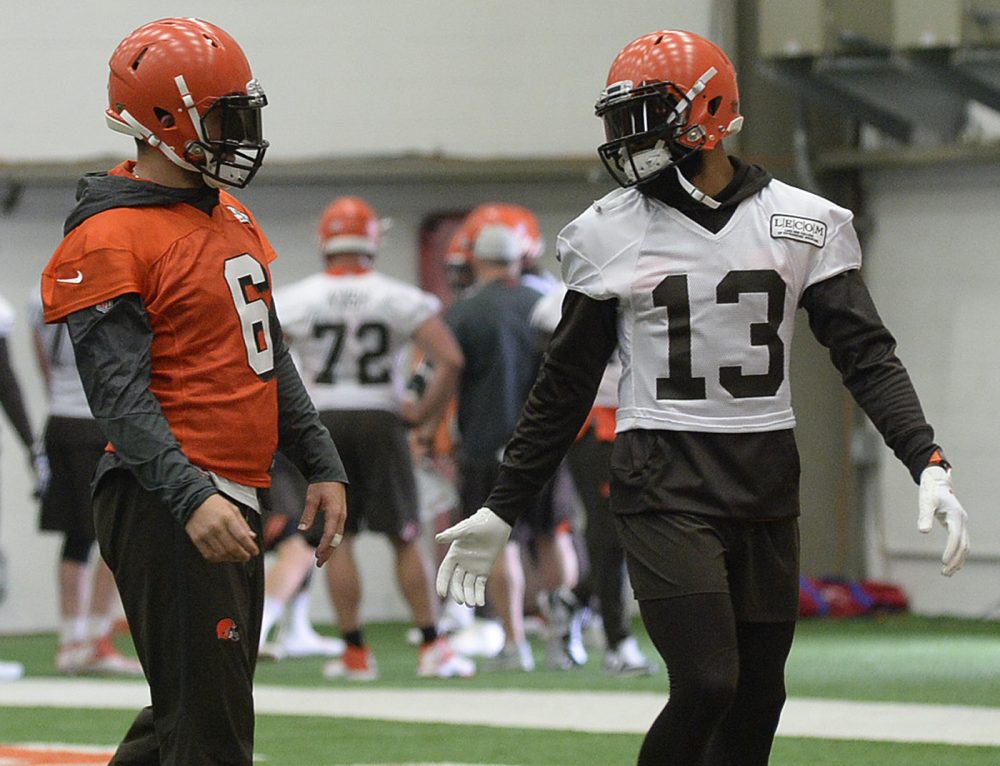 The bond off the field is ready for prime time.

“So for him to speak his mind, it’s always good for the leader of your team to kinda have that and everbody follow that lead. If he steers off, that’s what this team’s here to guide him on the right path, but I don’t see him really doing anything too wrong. He speaks his mind. Freedom of speech, you have a right to your own opinion. That’s what he does, and I personally love it.”


Beckham’s comments about Mayfield couldn’t have been easy for Giants quarterback Eli Manning to hear. They spent five years together, and Beckham wasn’t fully supportive during a controversial interview with ESPN in October.

“I don’t know,” Beckham said when asked if there was an issue at quarterback. “I feel like he’s not going to get out the pocket. He’s not — we know Eli’s not running it. But is it a matter of time issue? Can he still throw it, yeah, but it’s been pretty safe and it’s been, you know … cool catching shallow (routes) and trying to take it to the house. But I’m, you know, I want to go over the top of somebody.”

Beckham wasn’t afraid to contrast Mayfield and Manning on Wednesday, starting with Mayfield’s penchant for speaking his mind.

He didn’t stop there.

“I’m going to have to get adjusted to the speed because he has an arm,” he said of Mayfield after only his third practice with the Browns. “He’s throwing that ball hard. Just catching him from the first day, it was like, ‘Wow! This is completely different.’

“It just takes time. Like I said, we play in September, so it’s a good thing.”

Beckham “giddy” to be with Browns, feels “something in the air”

Mayfield and Beckham were introduced by Giants receiver Sterling Shepard, who played with Mayfield at Oklahoma. They hit it off and spent much of last summer hanging out and throwing together.

“I watched Baker since Oklahoma,” Beckham said. “I think it’s the confidence he carries himself with. You can’t coach that on anybody. That’s something that comes within you, and he really has that. It’s on display always. You have to love that about him.”

“I’ve seen Baker smiling at Odell, Odell smiling back,” he said. “They’re getting that chemistry.”

Beckham generated headlines last month when he told GQ that Mayfield, the No. 1 pick in 2018, is “Brett Favre — he’s going to be a Hall of Famer.”

He stands by the scouting report.

“It’s crazy,” he said of the reaction to his comment. “When I say stuff like that, I watch football. I really, really watch football. And that is a good comparison in my eyes. I loved Brett Favre growing up. Baker has a lot of similarities to him. They put the highlights together, it looks the same.

Baker Mayfield won’t hesitate to speak up, proud to take on primary leadership role
Greedy Williams quickly gets past questioning whether he fits in NFL, starts making plays in starting lineup