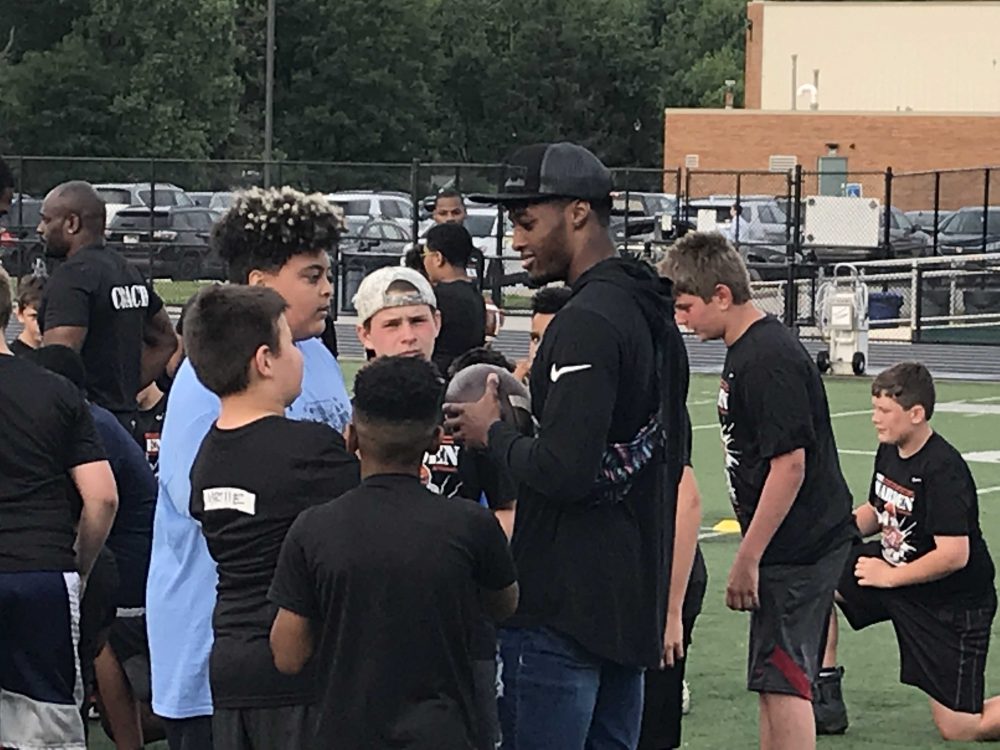 MACEDONIA — Not much fazes Denzel Ward.

He faced Steelers All-Pro receiver Antonio Brown in his NFL debut last year and had two interceptions. He lined up against three-time Pro Bowler Odell Beckham Jr. during minicamp this week and didn’t back down. He hears Super Bowl expectations for the Browns and dismisses them as incredibly premature.

But when Ward stood in the middle of the Nordonia High School stadium on Friday night — surrounded by hundreds of kids going through drills at the free youth football camp bearing his name — he was thrown for a loop.

“Man, it’s a lot, especially this is where I went to high school. It feels like family here,” the 22-year-old cornerback told The Chronicle-Telegram. “Just giving back to the community is always something I wanted to do and dreamed about, and being a positive role model and impacting my community and people around me.”

Ward, the No. 4 pick out of Ohio State in 2018, made his presence felt on the field as a rookie. He had three interceptions and 11 passes defensed and went to the Pro Bowl despite missing three of the last four games after suffering two concussions.

“You can tell he’s special,” Whitt said during organized team activities last month. “I’ve been very fortunate to coach DeAngelo Hall when he was young, had Tramon (Williams) and Sam (Shields) and Charles Woodson. This guy’s as gifted as any of those guys.”

Woodson went to nine Pro Bowls and is expected to be a first-ballot Hall of Famer.

“I appreciate that. It means a lot,” Ward said. “But I just like to stay focused and work on what I’ve got to work on now. Not really look too far ahead.

“I’ve got a lot of work to do to get up to where those guys are.”

That’s typical Ward. He won’t get ahead of himself and won’t get caught up in even the highest of compliments.

“I take a lot of pride in staying unfazed by things and just focused on what I’ve got to focus on, and what’s going to affect me personally,” he said.

Ward even took the one-on-one battle with Beckham in stride, running stride for stride with the world’s most popular receiver.

“It’s exciting,” Ward said. “I was having a lot of conversations with him, and I told him I feel he’s going to be one of the reasons that my game goes to the next level. Going against him is going to be fun.”

Ward wasn’t afraid to use his hands to slow Beckham, which was just fine with his opponent.

“That’s good. I personally think that he’s going to be a top, top corner,” Beckham said. “From what I’ve seen, we’re going to go at it every single day, and we’re going to get better.

“All I’ve ever known is to compete, so there’s never no hard feelings if we’re getting grabby. He might get grabby one play. I might push off the next play. It’s about competing. That’s what’s going to happen.”

Ward said he’s “gotta go out and prove” he’s one of the game’s top corners and really appreciated Beckham and coach Freddie Kitchens complimenting his competitive will.

“I take a lot of pride when people say I’m competitive. That’s who I am,” Ward said. “So I definitely try to go out there and show that night in and night out.

“Odell definitely brings that out in me. And going against guys like him and Jarvis (Landry), I feel like they’re tougher receivers to guard. Sometimes you can get caught up in going through the motions, but when those guys get out there, you know you want to compete and beat those guys, so that will push you to compete going against them.”

Ward’s mom, Nicole, looked on with pride as Ward talked and played catch with the campers. His dad, Paul, was on their minds.

The former school principal died of a heart attack in 2016, and Ward recently started the Make Them Know Your Name Foundation to educate people about heart health. The camp also promoted the foundation.

“It means a lot,” Ward said. “My dad, he affected a lot of kids and families, and that’s something I also want to do, affect communities. That’s why I’m doing this camp. I wanted it to be a free camp as well, just giving back to the community.”

The familiar setting had him flashing back a few years.

“I was telling my guy here, a lot of memories are here,” Ward said. “Just scoring touchdowns. That’s when I used to play receiver, so I was back to my high school receiver days.”