Analysis: Browns shouldn’t trade Duke Johnson, should trust him to be good teammate 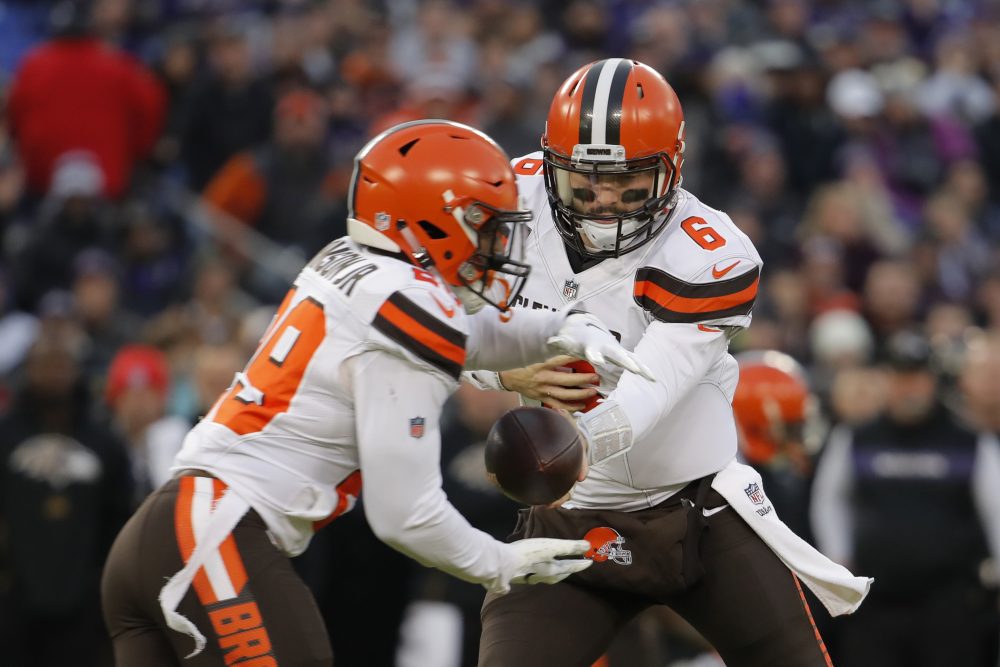 If I were Browns general manager John Dorsey … I would have more variety in my wardrobe.

But if I were the man in the plain, oversized gray sweatshirt, I would stand by my convictions and not trade versatile running back Duke Johnson unless I got what I was asking.

With one caveat: quarterback Baker Mayfield and Johnson must be able to coexist. Which, as adults, they should be able to do.

I’ve changed my mind about Johnson.

Not about him as a player. Or a teammate.

But whether the Browns should trade him.

After Johnson’s trade request became public April 1, I thought it would be in the best interest of the Browns and Johnson for Dorsey to make a deal, even if he didn’t get fair value — a fourth-round pick or quality player — in return. With the Browns seemingly on the cusp of something special, any distraction seemed unnecessary.

But with the passage of time and the return of Johnson for mandatory minicamp last week, I’ve decided the Browns are better off keeping him.

I know this is in direct contrast to Johnson’s desires, as he reiterated his trade request Tuesday in no uncertain terms. And I appreciate Johnson’s perspective.

He feels he was betrayed by the Browns when they put him on the trade block after signing Kareem Hunt, they no longer deserve his loyalty and he’d rather land with a new team now than at the midseason trade deadline when Hunt is close to returning from an eight-game suspension.

But as adamant as Johnson was that he wants to go somewhere else, he was nearly as clear that if he stays he’ll make it work. And he lost any leverage to force a deal when he avoided $88,000 in fines by reporting to minicamp.

Johnson is in his fifth season with the Browns, so those who’ve been around the organization know him. He can be moody and get frustrated but he works hard and shows up when it counts, never missing a game.

I believe Johnson when he says he’ll be a professional if the Browns don’t trade him. I don’t think he’ll be divisive or disruptive. I think enough time has passed that he’s resigned himself to the reality that he could very well remain on the roster.

Mayfield needs to get there, too.

He watched and listened to Johnson’s interview in which he reiterated the trade request and didn’t appreciate it. He said any awkwardness was “self-inflicted” and drew a line in the sand.

The sentiment follows the overall tone set by coach Freddie Kitchens, but it’s unusual for a player to speak so strongly about a teammate when it’s negative. Mayfield is such a forceful leader already and has the overall support of the locker room that calling out Johnson shouldn’t create a division.

But Johnson has supporters and friends on the team, which was obvious when “Duuuuke” was yelled during minicamp when he’d make a play. For the team’s sake, Johnson and Mayfield should find a place of mutual respect.

Because odds are Johnson is sticking around. At least for a while.

A trade in training camp wouldn’t be a shock, especially if a playoff contender loses a running back to injury. A trade at the midseason deadline seems more likely, assuming Hunt avoids trouble and looks like he’s ready to return for Week 10.

But Dorsey has been resolute he won’t trade Johnson just to trade him. He values him too much to give him away for a sixth- or seventh-round draft pick.

With Hunt ineligible for the first eight games, the Browns need Johnson. He’s the only proven backup to Nick Chubb. No matter how many good things the coaching staff says about Dontrell Hilliard, he doesn’t have the talent or experience of Johnson, who was the team’s player of the year in 2017 when he amassed 1,041 yards from scrimmage and seven touchdowns.

Dorsey’s never-ending quest for talent was obvious when he went after defensive tackle Gerald McCoy despite not having a pressing need. That’s why he’s likely to keep Johnson.

I understand now. Mayfield should, too.

His reps in team drills were limited, but they were enough to show the talent that’s made him a three-time Pro Bowler. He just looks different than most NFL wideouts. He’s silky smooth running routes and snatches the ball out of the air like it’s a marshmallow.

But we already knew that. We didn’t know how Beckham would react after his first consecutive practices with the Browns.

His 19-minute interview session answered those questions. I believed him when he said he’s “almost giddy.” I don’t doubt he’s come to grips with the trade that he needed time to process.

Minicamp was necessary for Beckham to begin to fit in with his teammates and put his absence from the offseason program in the rearview mirror. He did that with his attitude and performance.

** Defensive tackle Larry Ogunjobi and receiver Antonio Callaway are my top guys to watch in training camp. They could have monster years.

** Rookie cornerback Greedy Williams looks like the real deal. He’s got the confidence to match his size and athleticism.