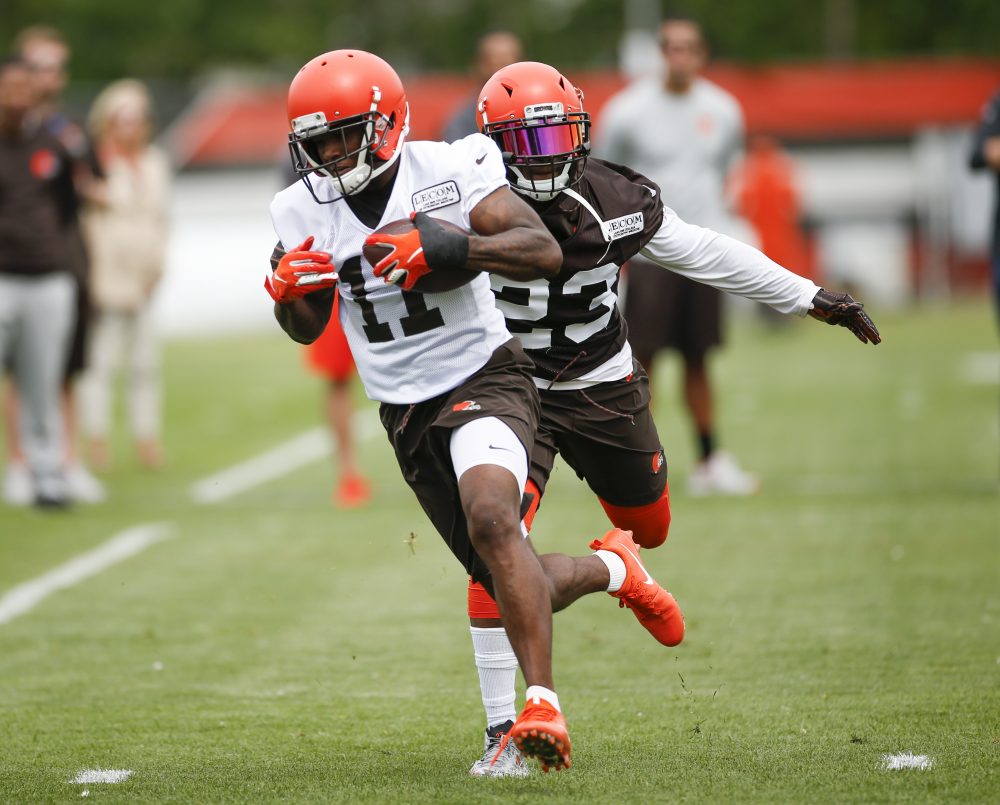 In fact, he embraces life in the background.

“I’m used to being the underdog,” he said during minicamp last week. “I’ve got that underdog mentality.


With Odell Beckham Jr. and Jarvis Landry ahead of him on the depth chart at receiver, there’s no way Callaway will draw the bulk of the headlines this season.

Unless … he reaches the lofty goals he’s set.

“Big season,” Callaway said when asked what people can expect. “A thousand yards.”

Callaway, who dropped to the fourth round of the draft last year after a string of off-field troubles at the University of Florida, said being overlooked brings out the best in him, and he wants all the motivation he can find.

“I need goals like that to push me,” he said.

Browns coach Freddie Kitchens is a fan of the grand plans.

“I like setting the expectations high for ourselves — not letting you guys do it, but us do it,” he told reporters.

General manager John Dorsey believed Callaway (5-foot-11, 200 pounds) had first-round talent, so he opened himself to criticism for taking a guy who in college was investigated for sexual assault but cleared, received a misdemeanor marijuana citation and was suspended for the 2017 season for his involvement in a credit card scam. Callaway had a preseason incident last year in which a small amount of marijuana was found during a traffic stop, then largely stayed out of trouble and the misdemeanor charge was eventually dismissed.

The explosiveness that makes Callaway a special athlete was evident periodically during his solid but up-and-down rookie season. He was forced into a starting spot when Josh Gordon was traded after Week 2, starting 11 of 16 games. He caught 43 passes for 586 yards and five touchdowns.

Pretty good for a rookie who hadn’t played in a year.

He said last year’s performance came “just off talent” and he “didn’t really” take the offseason seriously despite coming off a season without football.

“This year I’m taking it serious,” he said.

The change includes improved diet — “That’s mandatory. Got to treat your body right, that’s a temple,” he said — and a sharper focus on route running.

“Just routes getting crisper, getting in and out of routes, as far as his burst, as far as plucking and catching the ball,” he said. “I’m very, very inspired by where he’s going in his progression. So it’s still the process, he’s still a young player, but there are strides being made.”

“He’s taken a huge step,” Bitonio said. “I think when he first got here, there was a lot going on. He was drafted and then had some stuff, but he seems real focused on football, and I think he’s seen the mix of things he can be.”

Callaway’s calling card is 4.41 speed that was on display when he accelerated to catch a 47-yard touchdown vs. the Saints with 1:16 left. With Beckham sure to draw the attention of the defense wherever he goes and Landry attracting coverage underneath, Callaway could feast against one-on-one coverage deep.

“He made some big plays for us last year, some big, long plays,” Bitonio said. “You always need that deep threat. Odell’s a great receiver. Jarvis is a great receiver, and Odell can do anything on a football field, but you also want that guy that can take the roof off the defense and really open it up for the tight ends and everybody else.”

Callaway said he and Beckham talk about life, not football, when they’re together, but he loves being on the same team as the superstar.

“That’s a great feeling, knowing that you’re playing with somebody of that level of play right there,” Callaway said. “You can’t do nothing but feed off his energy and try to learn from him.”

Callaway isn’t worried about a lack of passes being thrown his way.

The coaches are exploring another way to get the ball in his dangerous hands. After three punt returns for 46 yards and three kickoff returns for 79 yards in the finale last year — his only extended opportunity — he was among those working as a kickoff and punt returner throughout the offseason.

He wants the jobs.