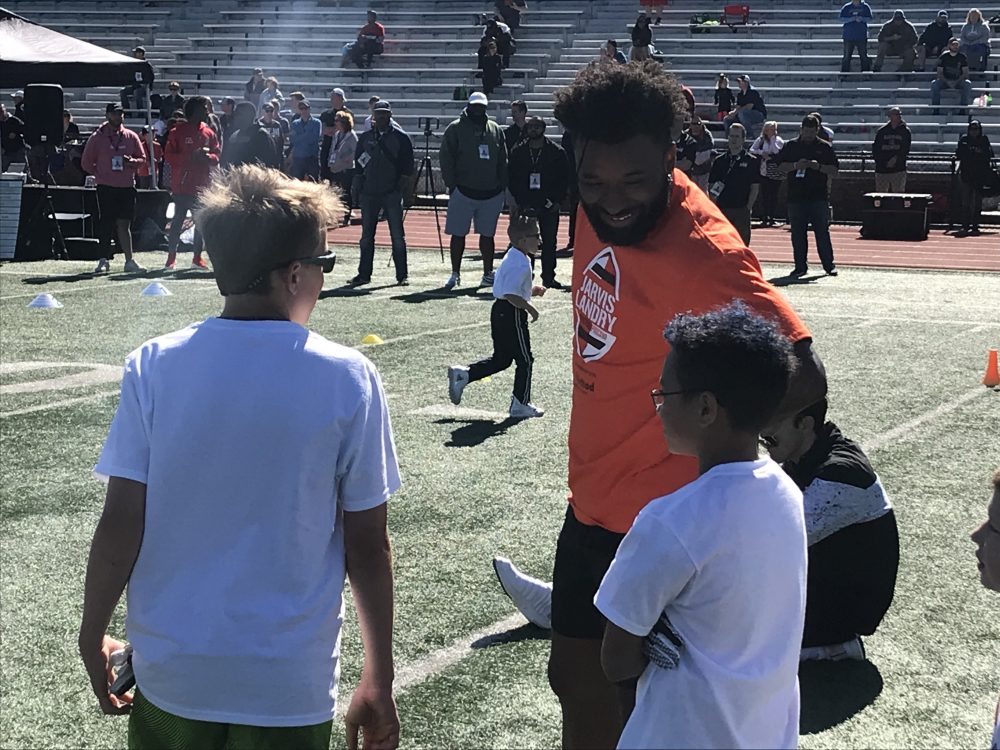 SHAKER HEIGHTS — Receiver Jarvis Landry doesn’t think quarterback Baker Mayfield and running back Duke Johnson will have a hard time sharing a locker room or huddle in the fall if general manager John Dorsey chooses not to trade Johnson.

Landry isn’t worried the tension between Mayfield and Johnson will become a long-term problem.

And he’s not concerned their verbal dust-up during minicamp will create division within the team.

“I don’t think it would be difficult at all,” Landry said Friday of Mayfield and Johnson working together. “I say to you it’s a non-issue, and it’s not one that we are feeling any particular way about. It’s something that is being blown up from (the media) more than it really is. No offense. I didn’t mean it like that.”

NFL Network’s Michael Silver reported Thursday that several Browns veterans approached the second-year quarterback in the locker room last week after he criticized Johnson for reiterating his request to be traded. The veterans voiced their displeasure and the differences were “hashed out,” Silver reported, citing multiple sources.

Mayfield had escalated the issue when he told reporters any awkwardness for Johnson was “self-inflicted.”

“He’s got to do his job,” Mayfield added. “He said he’s a professional, I hope he does his job.”

Analysis: Browns shouldn’t trade Johnson, should trust him to be good teammate

“I hope he understands and feels that guys are here for him, whether he is here or not, that the relationship goes beyond the player, the person as well,” Landry said.

On Friday, Landry said he wasn’t one of the veterans who spoke to Mayfield.

“My relationship with Duke is always going to be the same,” he said at his youth football camp at Shaker Heights High School. “It’s a non-issue.”

Landry, who will host a charity softball game Saturday night at Classic Park in Eastlake, also responded to a Silver report that the transition to new offensive coordinator Todd Monken hasn’t gone as smoothly as hoped, with coach Freddie Kitchens taking a greater role in the offense than anticipated.

“Who’s your source? Where are you getting all of this from?” said Landry, who was informed they were NFL Network reports. “Listen, listen, I have no idea about that, but I will say that Freddie has done a great job of monitoring, stepping in when he needs to step in. Todd Monken, he continues to teach us the ways that, you know, every guy is different as far as learning, so he continues to try to teach us and we kind of go from there.

“It’s a new offense, so there’s a lot to learn, there’s a lot of moving parts, so it takes some time. Not everything goes smoothly, I mean, he’s only been there what a month.”

Landry attributed the reports to the downtime of the offseason and the need for talking points. He also believes the focus on the Browns will continue to grow in intensity with the heightened expectations and their roster of high-profile players, including Mayfield, Landry and receiver Odell Beckham Jr.

“That’s a part of this story. That’s a part of everything that we’re trying to accomplish,” he said. “We’re going to have to work through those things. The best way to tell the foundation of something is internally. If we stay strong and continue to trust each other, continue to build on our relationship, our chemistry, we’ll be fine.”

“And now we’re here at a camp today early in the morning, and they took the time out of their day and their schedule to be here, so it shows a lot about the class that the organization has.”